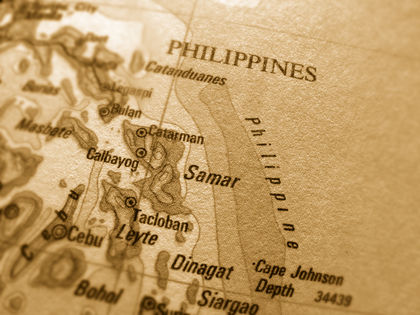 The Philippine economy has experienced repeated boom-and-bust cycles in the 5 decades since the nation achieved independence from the United States in 1946. In the 1950s and early 1960s its economy ranked as the second most progressive in Asia, next to that of Japan. After 1965, when Ferdinand E. Marcos became president, the nation experienced economic problems and social unrest, especially from the 1970s, when corruption and cronyism (the practice of appointing friends to well-paid posts regardless of their qualifications) took hold. In 1972, Marcos declared a state of emergency and placed the country under martial law to stifle unrest and control economic development. By his third term in

1981, democratic institutions in the country had severely eroded, foreign debt ballooned, and the country's economy plummeted. In less than 20 years, the Philippines had gone from relative prosperity to becoming the "sick man of Asia." In 1983, the leader of the political opposition, former senator Benigno Aquino, was assassinated upon his returned from exile in the United States.

Marcos was removed from office in 1986 through a peaceful "People Power" revolution in which millions of people demonstrated in the streets. Aquino's widow, Corazon, became president, and a new constitution was approved in 1987. Meanwhile, the GDP growth rate increased steadily from 3.5 percent in 1986 to 4.3 percent in 1987, peaking in 1988 at 6.7 percent. The Aquino administration endured many troubles, including 6 coup d'etat attempts, many natural disasters (e.g. earthquakes, the Mt. Pinatubo eruption), and a power shortage problem that caused economic activities to stop. During this period, the Aquino administration passed various critical laws such as a liberal Foreign Investment Act, the Comprehensive Agrarian Reform Law, and the privatization of government corporations that brought the economy back to its feet.

Aquino's successor, Fidel Ramos, embarked on an ambitious development plan dubbed "Philippines 2000." Under the plan, several industries critical to economic development were privatized, such as electricity, telecommunications, banking, domestic shipping, and oil. The taxation system was reformed, and external debt was brought to more manageable levels by debt restructuring and sensible fiscal management. By 1996, GNP was growing at a rate of 7.2 percent and GDP at 5.2 percent. The annual inflation rate had dropped to 5.9 percent from its high of 9.1 percent in 1995. By the late 1990s, the Philippines' economic growth gained favorable comparisons with other Asian countries such as Taiwan, Thailand, South Korea, and Malaysia.

The Philippine economy took a sharp downturn during the Asian financial crisis of 1997. Its fiscal deficit in 1998 reached P49.981 billion from a surplus of P1.564 billion in 1997. The peso depreciated (fell in value) to P40.89 per U.S. dollar from its previous rate of P29.47 to a dollar. The annual growth rate of the GNP fell to 0.1 percent in 1998 from 5.3 percent in 1997. Despite these setbacks, the Philippine economy fared better than that of some of its Asian neighbors, and other nations praised the Ramos administration for its "good housekeeping."

In 1998, Joseph Estrada was elected president. Even with its strong economic team, the Estrada administration failed to capitalize on the gains of the previous administration. His administration was severely criticized for cronyism, incompetence, and corruption, causing it to lose the confidence of foreign investors. Foreign investors' confidence was further damaged when, in his second year, Estrada was accused of exerting influence in an investigation of a friend's involvement in stock market manipulation. Social unrest brought about by numerous bombing threats, actual bombings, kidnappings, and other criminal activities contributed to the economy's troubles. Economic performance was also hurt by climatic disturbance that caused extremes of dry and wet weather. Toward the end of Estrada's administration, the fiscal deficit had doubled to more than P100 billion from a low of P49 billion in 1998. Despite such setbacks, the rate of GNP in 1999 increased to 3.6 percent from 0.1 percent in 1998, and the GDP posted a 3.2 percent growth rate, up from a low of-0.5 percent in 1998. Debt reached P2.1 trillion in 1999. Domestic debt amounted to P986.7 billion while foreign debt stood at US$52.2 billion. In January 2001 Estrada was removed from office by a second peaceful "People Power" revolution engineered primarily by youth, non-governmental organizations, and the business sector. President Estrada was the first Philippine president to be impeached by Congress, and his vice-president, Gloria Macapagal-Arroyo, became the fourteenth President of the Republic.

The economy of the Philippines is hampered by huge foreign debt, a low savings rate, inefficient tax collection, inadequate infrastructure , especially outside major cities, and poor agricultural performance. The Philippine economy is vulnerable to oil-price increases, interest-rate shifts by the U.S. Federal Reserve, and the performance of international stock exchanges. Social factors that have a negative impact on the economy include a high crime rate, especially kidnappings and rape, pockets of Communist rebels in rural areas, threats from Muslim separatist movements, high rates of poverty and unemployment, and the government's inability to begin its land-distribution program. Environmental factors also damage economic development, including frequent typhoons and drought. Worker productivity is adversely affected by illnesses brought on by air and water pollution. In metropolitan Manila alone, the effect of pollution on health and labor productivity has been estimated to be equal to a loss of about 1 percent of gross national product annually.

Foreign aid, or official development assistance (ODA) funds, have contributed immensely to the development of the nation's economy. Through grants and loans extended by development agencies and international creditors, the government is able to finance infrastructure development (bridges, roads, highways, railways, transportation systems) and social programs (livelihood projects, training seminars, immunization programs, and environmental projects). Since the late 1990s, ODA funds have helped improve living conditions in the most depressed rural areas, especially in Mindanao, Southern Philippines, mostly via agricultural programs. In 1999 most funds were allocated to agricultural programs. About 95 percent of ODA assistance is distributed in loans, with the remainder in grants.

When this article published? I need to know the exact date as a reference for my study. thanks. you're answer helped a lot to finish my study. God bless and more power.
3
ferdinand

When this article published? I need to know the exact date as a reference for my study. thanks. you're answer helped a lot to finish my study. God bless and more power.
4
Guy

I would just want to know what the GDP of the Philippines in 2018.