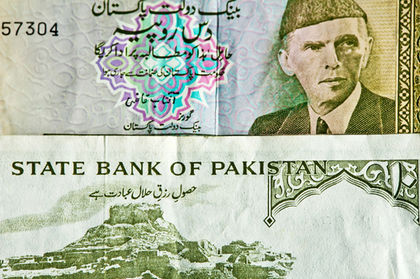 of more than 11 percent annually. After the economic crisis that came as a consequence of the nuclear standoff with India and international sanctions against Pakistan in 1998, it went down to about 7 percent again. There are 3 stock exchanges in Pakistan: Karachi, Lahore, and Islamabad. In 2001 the Karachi stock exchange had about 780 listed companies with trading volume increasing from 1.1 million shares a day in 1990 to about 95 million in 2001. Lahore and Islamabad stock exchanges are substantially smaller than Karachi.

The State Bank of Pakistan (SBP), the central bank, controls the money supply and credit, supervises the operations of banks, administers the country's international reserves, and acts as banker to the federal and provincial governments. The government of Pakistan has followed a liberal monetary policy from 1999 to 2000 in order to provide cheap credit to the industrial sector. The demand for credit, however, has not come forth from the private sector. Although domestic credit expansion was higher this year due to large borrowing by the government sector, conversion of non-resident foreign currency accounts into rupees, and an increase in liquid reserves, actual growth in money supply has remained stagnant due to low credit demand from the private sector. The government and the SBP are attempting structural reforms in an effort to move toward more indirect, market-based methods of monetary control along with greater autonomy for the SBP. The central bank's autonomy was considerably strengthened with the passage of new banking laws in the State Bank Act in May 1997.