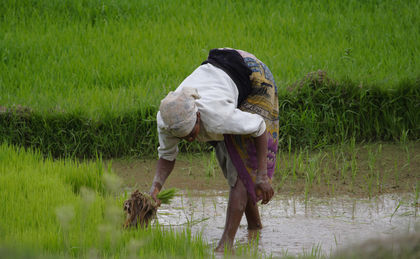 Agriculture in Nepal has long been based on subsistence farming, particularly in the hilly regions where peasants derive their living from fragmented plots of land cultivated in difficult conditions. Government programs to introduce irrigation facilities and fertilizers have proved inadequate, their delivery hampered by the mountainous terrain. Population increases and environmental degradation have ensured that the minimal gains in agricultural production, owing more to the extension of arable land than to improvements in farming practices, have been cancelled out. Once an exporter of rice, Nepal now has a food deficit.

Over 80 percent of the population is involved in agriculture, which constitutes 41 percent of GDP. The seasonal nature of farming leads to widespread underemployment, but programs to grow cash crops and encourage cottage industries have had some success over the years. Two-sevenths of the total land is cultivated, of which 1.5 million hectares produced 3.7 million metric tons of the staple crop of rice in 1999. Wheat and maize together take up a similar portion of the available land, with harvests of 1 million metric tons and 1.5 million metric tons, respectively, in 1999. Production of cash crops increased substantially in the 1970s, and sugarcane, oilseed, tobacco, and potatoes (a staple food in some areas) were the major crops. Agricultural production accounted for about three-fourths of total exports in the late 1980s. As noted earlier, most exports consist of primary agricultural produce which goes to India. In general the majority of Nepalese farmers are subsistence farmers and do not export surplus; this does not prevent a minority in the fertile southern Tarai region from being able to do so. Most of the country is mountainous, and there are pockets of food-deficit areas. The difficulties of transportation make it far easier to export across the border to India than to transport surplus to remote mountain regions within Nepal. A considerable livestock population of cattle, goats, and poultry exists, but the quality is poor and produces insufficient food for local needs.

Government efforts to boost the agricultural economy have focused on easing dependence on weather conditions, increasing productivity, and diversifying the range of crops for local consumption, export, and industrial inputs. Solutions have included the deployment of irrigation, chemical fertilizers, and improved seed varieties, together with credit provision, technical advice, and limited mechanization. This has had some effect. Land under irrigation increased from 6,200 hectares in 1956 to 583,000 hectares in 1990. The use of chemical fertilizers, introduced in the 1950s, climbed to about 47,000 metric tons by 1998. Still, the weather continues to determine good and bad years for the average farmer. On a national scale, while production of both food and cash crops grew annually by 2.4 percent from 1974 to 1989, population increased at a rate of 2.6 percent over the same period.

Increased agricultural activity has placed tremendous stress on the fragile ecosystems of the mountains, with severe deforestation leading to erosion and flooding that threatens the livelihoods of farmers throughout the country. In the rush to open up arable land in the early years of development, Nepal lost half its forest cover in the space of 3 decades. Government plans to maintain cover at 37 percent depend on the success of community forestry programs, which merge traditional and modern agro-forestry and conservation practices. Responsibility is placed in the hands of Forest User Groups, which included almost 800,000 households in 1999.

A potent issue is that of land reform. Before 1950, a feudal system held sway. Land ownership was concentrated in the hands of landlords who contracted out to tenant farmers. Increased productivity may have been suppressed by such a system. Even though the legal mechanisms for land reform (such as placing limits on the amount of land owned) do exist, in practice most farmers still have pitifully small holdings. Predictably, land reform has been the mandate of every political party in Nepal, particularly the communists.

its good to know the about agriculture in nepal. but i need more information
2
suresh bharati

thanks 4 this info about nepal. and please if u can put more about special n specific crops n how to do the plantation .
3
Pratap Jung Rai

i feel so happy, Nepal is agricultural country and having various opportunities in it, but Nepal can't grow up in the context of agriculture development, always carry on traditional method.
4
bhashkar sharma

Dear, sir madam i,m thinking to do group farming in nepal how could your team help for us.
5
farhan hussain

Hello sir i am going to start a cow farm in nepal.so I need some information ,can you help me?
8
Rewat

Thanx for the good information, still all we nepali farmer are not at a place to make good marketing and get modern technology. we are always suffering from the exploitation of businessmen so we also have to firm the one organization which works for only agricultural sector...
9
Dhan Prasad Kharal

respect Sir
i am interesting for goat farming in Nepal so how i get your suggestion and help for farming in Nepal please give me information. then i want to farming in organic agriculture farm in Nepal. which is type recommend in me.
12
Rakesh

Hi I am not in nepal at present but I have land in tarai and my ancestor did farming and still my brother is engaged on it.But I saw present farming people are using pastisid, different camicals and it is vary danger but yesterday I saw some Indian tv programme about agriculture so I think I want to go back and want to do farming of organic technique ..could any one suggest me where can I get idea about organic agriculture...
13
kapur bhusal

As a agricultural student, thanks sir but i want to know about present situation of agriculture in Nepal and new agricultural research activities. i think you should update agricultural data..
15
kabita acharya

i need to know the percentage of farmers in nepal.
16
mesfin

Hello sir/Madam
i need the latest information about the percentage of people involving in agriculture in Nepal including totoal GDP contributed by it.(urgent)
18
AIsha

Can I know some more about industrial agriculture and agro industries of Nepal and some plans to improve it further.
19
hridesh sharma

I Want More Information Related Farming.I Want To Little Buisness At Agriculture So I need Help How To Do ThatI Want To Invest At Agriculture
22
Mim shrestha

Hello i am from Kavre beside sunkoshi river . I am very Interest to star goat farm. But I haven't any Idia to get good quality goat and how much per goat? so please can you let me know where can I get it?
23
catrina

Hello,I am form Taiwan.I Want to by cassava in Nepal.If you have any information about exporter,please let me know.Thank you.
24
srijana paudel

I want to know how the marketing of agricultural products is done in Nepal. Is it systematic one?
25
suman

Yes good article. Agriculture is first priority of Nepal and wish after three years my agriculture plan may successful.
26
arbin

its better than the previous years.bt still lots of changes is to be done regarding agricultural in nepal. its sad to say nepal government plans and policy is not satisfactory though we are running in 2014 and all we need is a support from a public aspects.
27
dristi

it's excellent . can you describe little more ? as the generation of this twenty first century we should have more information.would you help us?
28
Abishek Kharel

Its very sad to know 80% of people of Nepal are engage in agriculture but we are still dependent in agriculture .Now,we youth should start group farming to decrease trade loss.
29
Nirmal Lama

I m very happy being an agricultural student..As we know that Nepal is known an agricultural country, that's why having a lots of oppoutunities in it but why the governtment of our country can't grow up in the context of agriculture development,only following traditional methods instead of following the new technology.Does this government give first priority to agriculture or not?i want to know some further information about this problem.
30
Namuna

More than 80% of people are involved in agriculture in Nepal and about 40% of total annual income is derived from agriculture. Thankyou I found this information as well very important.
31
IRENE

I'm doing research on Nepal for my Human Geography class. I'm trying to find how much of Nepal land is cultivated in Arces
32
Jecina Upadhyay

I love it if i will be the contributor to our country in agriculture.
Proud to be Nepali. :)
33
Prem bahadur Rokaya

I love it if i will be the contributor to our country in agriculture.
Proud to be Nepali BAJURA
34
Alsha dhakal

thanks for Information about Agriculture Condition of Nepal.
36
Sameer yadav

I will proof the farming profession is the best only among all the profession .
But I m alone
37
Amir pandit

Firstly I want to thank you so much for this article. I am not an Ag student but also I want to do something in this field .so do I need to have any degree or certificate to get in this field. I have got some planning's which may help to grow some extend in this field. My dad is doing seed business in Nepal and I am inspired from him, I want to make advancement of the same business with addition of some more projects. I need suggestion from them who has got more experience in this field.
Regards,
Mahendra Yadav (MAHIR)
39
Alok

Hello I am from Nepal and I am continuing the high-tech firm of Dad who had passed away last three months ago.I am seeking for the help to continue the firm in an effective way because in today's era agriculture is an integral part of the family ,society as well as whole nation in the developing countries like Nepal.