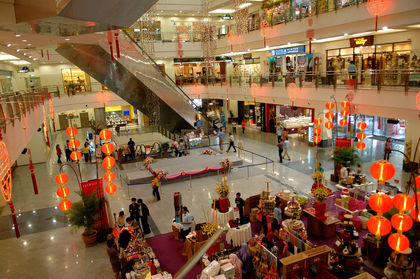 Malaysia experienced extraordinary economic growth during the last 3 decades, which brought prosperity and higher standards of living to the majority of the people. One of the most important achievements in Malaysia has been the elimination of extreme poverty and hunger. The urban areas—especially the capital Kuala Lumpur, and major tourist destinations and industrial cities such as George Town, Malacca, and Petaling Jaya— enjoy a quality of living very similar to that in developed countries. The major cities have first-class shopping centers, condominiums with air-conditioning and swimming pools, expensive private schools, and elite clubs. The rural population, meanwhile, often lives in traditional wooden houses in kampungs (villages) with limited facilities.

The monthly gross household income nearly doubled from MR1,167 in 1990 to MR2,007 in 1995. There has emerged a fairly strong middle class. However, incomes are still distributed unevenly. For instance, the wealthiest 20 percent of Malaysians control 53.8 percent of the wealth, while the poorest 60 percent of the population controls just 21.3 percent of wealth. At the very bottom of the income range, the poorest 20 percent of the population controls only 4.5 percent of wealth. Disparities exist along both geographic and ethnic lines. In general, the Chinese population, which has traditionally lived in urban areas and been involved in small and medium-sized businesses or employed in various industries, has had higher incomes than the Malays, who often live in small towns and villages and were traditionally engaged in agriculture. Secondly, there are considerable differences in standards of living, incomes, and access to medical and other social benefits in different parts of the country. Peninsular Malaysia, where the majority of the population lives, has much higher standards of living compared to East Malaysia.

Since 1970, the Malaysian government has actively implemented social policies aimed at the elimination of poverty and social inequality, and the development of a social welfare system . The communal unrest of 1969 prompted the Malaysian government to introduce the New Economic Policy (NEP). This 20-year program established state support of poor communities and access to education and social benefits for Malays and indigenous people (the Bumiputera ). This latter aspect included the establishment of privileged access to public services, the granting of land rights, preference in education and training, and job quotas in the public sector. In the 1980s, Malaysia's leadership envisioned the formation of the Malay Baru (New Malays), a better-educated, politically and socially active people able to live in harmony with other communities. In the early 1990s the government relaxed some privileges and reduced some quotas for Bumiputera, making the social welfare system more inclusive and accessible to a wider range of people than it had been before.

Would you say that even today, as Malaysia is recovering from the reccession, that Malaysia has low unemployment and a good welfare system in 2010?

Thank you for your answer,
Allen Morris
alen92102@yahoo.com
(note: only one l in my name in the email address)
2
mamun

hi i am from Bangladesh i want to know how much can i earn in Malaysia as an international student.i have to pay my tuition fee&food,accommodation cost by doing job so can i do this?
3
nurul

did u have any recent data about urban poverty??
kindly reply my email..
thanks..
4
angeline

Hi can u provide me any data on poverty rate in Malaysia based on race? kindly email me asap thanks
5
Samhainraider