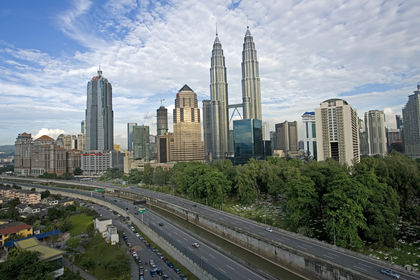 At present, Malaysia's industrial and service sectors are the 2 major pillars of the national economy. However, agriculture and mining were the 2 dominant sectors during its early history. Britain had slowly but steadily advanced into the region in the 18th and 19th centuries, establishing control over the territory of what would become present-day Malaysia. The British were attracted by the rich natural resources of this region and its convenient location along the Strait of Malacca, which was the main sea route connecting the Far East with British India and Europe. The British established large-scale plantations and introduced new commercial crops (rubber in 1876, palm oil in 1917, and cocoa in the 1950s). They also developed a large mining sector and encouraged migration of Chinese and Indian workers to these plantations and mines.

Since achieving independence, the Federation of Malaysia faced a need to develop and to diversify its economy, having a rapidly growing population. The country abandoned reliance on the export of primary natural resources and agricultural products and established itself as a rapidly industrializing country with a diversified export base. By the beginning of the 21st century Malaysia had become one of the fastest growing economies in Southeast Asia and third-richest state (after Brunei and Singapore) in the regional grouping known as the Association of South East Asian Nations (ASEAN).

The Malaysian government promoted the free market with limited state intervention and export-oriented industrialization. Its exports to the international market were used to promote efficient use of the country's resources and generate hard currency , which was necessary for catching up and further developing into areas of technological and industrial innovation. In the mid-1960s, Malaysia established 5-year planning, targeting certain areas of economic growth and social changes, and allocating public resources for priority sectors of the economy and for infrastructure development. Despite these efforts, the government was reluctant to institute centralized control over the state's economy. The 5-year plans became a basis for official development strategies. For example, the recently completed "Seventh Plan" (1996-2000) targeted productivity growth and moved the country towards capital-intensive, high-technology industries. The political and inter-communal violence that had undermined the country's stability and security in the 1960s and 1970s gave way to a period of remarkable stability. This has attracted international investors and greatly contributed to the rapid economic growth of the 1980s and 1990s, especially in the manufacturing and service sectors of the Malaysian economy. Unlike the government of neighboring Indonesia, the Malaysian government has managed to keep its external debt at a relatively moderate level. In 1998, external debt stood at US$42 billion, or 59 percent of GDP with debt service payments of about US$6.0 billion. Estimates for the year 2000 estimated that Malaysian official reserves stood at US$29.6 billion. However, the repatriation of the profits by foreign investors may cause a problem for the Malaysian economy in the future.

The structure of the Malaysian economy has changed during the last 2 decades. According to the World Bank, the proportion of manufactured production grew from roughly 20 percent of GDP in the early 1980s to 31.5 percent of GDP in the late 1990s. Manufactured products accounted for around 85 percent of gross export earnings in 1999, with electronic goods becoming one of the most important products. The role of mining has steadily declined during the last few decades (Malaysia was one of the world's largest exporters of tin in the 1970s), now contributing just 7 percent of GDP. Malaysia continues, however, to export tin, gold, bauxite, ilmenite (a titanium ore), oil, and gas. Meanwhile, the role of agriculture in the country's economy has also been declining, although it provides employment to large numbers of Malaysians. Nevertheless, Malaysia remains one of the world's leading exporters of rubber and timber and produces almost half the world's palm oil. Tourism is another important and rapidly growing sector of the economy, with about 7.5 million tourists visiting the country in 1999 and contributing RM10 billion to the national economy.

Malaysia has a very diverse economy. The manufacturing sector is dominated by large multinational corporations , with a heavy Japanese presence among the largest companies. Meanwhile, the agricultural sector is dominated by medium and small firms. In East Malaysia, Sabah, and Sarawak, and in some northern states, many farmers are still engaged in subsistence agriculture. In the service sector, especially in retail trade, large international superstores such as Marks and Spencer, SOGO, and Yaohan are complemented by a number of medium and small enterprises.

Rapid economic growth and stability brought economic prosperity to a large proportion of the population, especially in urban areas. It also helped to keep unemployment at a very low 3 percent (for comparison, unemployment in the United States was 4.2 percent in 1999). In some sectors, Malaysia has begun to experience a shortage of labor. In the late 1990s, there was an inflow of large numbers of foreign workers through legal and illegal channels from neighboring Indonesia, with whom Malaysia shares some linguistic and cultural similarities, and from Bangladesh, the Philippines, and Burma (Myanmar). This inflow is sometimes blamed for existing criminal activities and black market operations.

Drugs are another important issue; Malaysia is situated very close to the so-called "Golden Triangle" (an area between Burma, Laos, and Thailand) that is the world's largest producer of illicit drugs such as opium. Malaysia is among the few countries in the world to have adopted the death penalty for possession and sale of drugs. However, neither organized crime nor the black market have had a significant impact on the national economy.

Due to the tremendous economic growth and its ability to preserve stability and promote its multicultural environment, Malaysia has become an increasingly popular destination for tourists from Europe, Japan, and North America. Malaysian tropical forests and beaches, colorful festivals in major cities, and luxurious hotels provide a vibrant environment for the development of hospitality businesses.

what is the contribution of chemical industry in Malaysian GDP