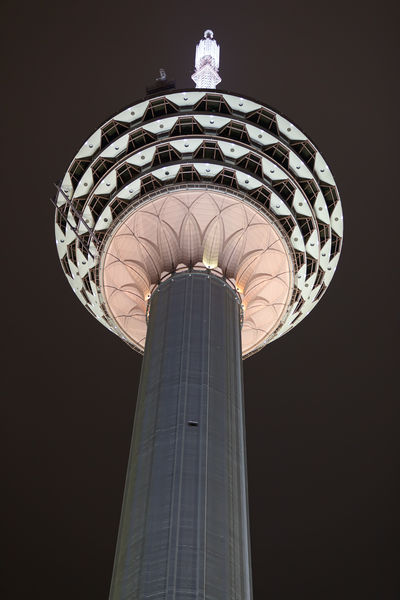 From the colonial era, Malaysia inherited relatively well-developed but unevenly distributed infrastructure and transportation networks. After achieving independence, the Malaysian government made considerable efforts and large investments in expanding its highways, railroads, seaports, and airports. More recently, the government played an active role in encouraging development of modern modes of communications such as satellite telecommunications and the Internet. In the late 1990s, the government launched a privatization program in the transportation and communication sector, which brought private investments, allowed more flexibility, and provided initiatives for managers to increase profitability and production efficiency.

Malaysia is served by a network of 94,500 kilometers (58,721 miles) of primary and secondary roads, 70,970 kilometers (44,100 miles) of which are paved. This includes 580 kilometers (360 miles) of superior quality expressways, which connect Kuala Lumpur with Singapore and with major seaports and other destinations. However, the road transportation system is still underdeveloped in East Malaysia (Sabah and Sarawak), with most of the roads in Peninsular Malaysia. In the 1990s, with the rapidly growing number of privately-owned cars (840,000 new registrations in 1997 alone), the roads in the capital and other major cities became highly congested. This also brought air pollution in Kuala Lumpur to a very high level, which combined with pollution from forest fires in the Indonesian part of Borneo to create hazardous smog in 1997 and 1998. In 1996, there was a total of almost 7 million motor vehicles registered in Malaysia, including 2.8 million passenger cars, 3.4 million motorcycles and mopeds, 37,000 buses and coaches, and 400,000 trucks and vans. In response to the growing number of cars on the national roads, the government invested in development of the public transport system, including modernization of the country's railways and the construction of a light rapid-transit system in Kuala Lumpur.

Malaysia has a railway system of about 1,800 kilometers (1,120 miles), part of which was planned for privatization in 1998-99. In 2000, only 148 kilometers (92 miles) of railways were electrified. The major tracks run from Singapore to Kuala Lumpur, and further to Pinang and Bangkok (Thailand). However, the railways are unevenly distributed. There is only 1 railway track of about 134 kilometers (83 miles) in East Malaysia (in Sabah). Malaysia intends to invest heavily in development of a monorail system in Kuala Lumpur and into building new railways. The biggest project is the US$632 million (RM2.4 billion) Express Rail Link (ERL), which will connect Kuala Lumpur Central (the main railway station in the Kuala Lumpur City) with Kuala Lumpur International Airport (KLIA). In 1996-97, the 8.6-kilometer Kuala Lumpur People Rapid Transit (monorail) was built at a cost of US$300 million (RM1.14 billion). The U.S.-based Parsons Transportation Group provided design and engineering services to the local Malaysian firm building

Kuala Lumpur's light rail transit systems. Several other multi-multimillion dollar railway projects have been initiated, but some were put on hold due to the difficulties caused by the Asian financial crisis.

Malaysia's seaports were established during the colonial era and served as merchant ports as well as British naval bases. The major ports are Kelang, George Town, Pinang, and Kuantan on the Peninsula, and Kota Kinabalu and Kuching in East Malaysia. During the last few decades, these ports were expanded to serve rapidly-growing Malaysian exports and imports. The West Port of Port Kelang has seen RM2.2 billion worth of combined (private and government) investments, while there has been RM2.8 billion worth of investment in the Tan-jung Pelepas Port. Competition has grown between Malaysia and Singapore for servicing international ships and handling containers, although 40 percent of Malaysia's international trade was handled through Singapore until recently. In 1998 Malaysia's seaports handled 83 million metric tons of cargo. In late 2000, there was an announcement that the world's largest container line, Maersk-Sealand, intends to move its regional trans-shipment operations from Singapore to the Malaysian port in Johor.

Malaysia has also promoted development of aviation in order to serve growing tourism and business needs. The country has 32 airports with paved runways, and 83 airports with unpaved runways. The largest of them, the US$3.2 billion state-of-the-art Kuala Lumpur International Airport, was opened in 1998. It is capable of handling 25 million passengers and 1.2 million tons of cargo annually. U.S. firms, including Harris, FMC, Adtranz, and Honeywell, have been awarded contracts to supply passenger trams, jetways, and information systems for this new airport. Malaysia transformed its national partly-privatized air carrier, Malaysian Airlines, into a world-class company, operating a fleet of about 100 aircraft.

In Peninsular Malaysia, electrical power is supplied by the predominantly state-controlled Tenaga Nasional company. Due to the rapid industrial development and growing demand for electricity, considerable efforts were made to privatize the national utility company and develop private initiatives to build and operate new power generating plants. To this end, a private consortium, the Independent Power Providers (IPPs), was established. Malaysia has sufficient reserves of oil, gas, and coal to meet its energy needs. Additionally, in East Malaysia there is huge potential for building hydroelectric power plants, but their development will require considerable investments. In the mid-1990s, the Malaysian government considered building the Bakun Hydro-electric Dam, which would have been one of the world's largest dams, in Sarawak; the controversial plan was abandoned, however, due to financial difficulties. In 1998, Malaysia produced 57.45 billion kilowatt hours (kWh), 94 percent of which was produced using fossil fuel and 5.22 percent by hydroelectric power plants.

Telecommunications services in Malaysia are provided by several competing companies. The largest is Telecom Malaysia, which formerly had a state monopoly in the sector. The quality of telecommunication services is up to international standards, thanks to an inflow of private investments and the government's initiatives in developing this sector. In 1998, the country had 4.4 million telephone lines and 2.17 million mobile phones. In 1999 there were 8 major Internet service providers (including Telecom Malaysia, MIMOS Ltd., and Maxis Ltd.), with a number of new companies announcing their intention to enter the market. In 1998, the Malaysian government announced the development of the multi-billion-dollar Multimedia Super Corridor (MSC). This ambitious project, 15 kilometers wide and 50 kilometers long, and stretching from Kuala Lumpur to the new international airport, is planned to become a Malaysian "Silicon Valley." The MSC will include 2 "smart cities," employing a high-technology environment, high-capacity telecommunications, sophisticated infrastructure, and even "electronic government."

This type of infrastructure was not developed in India. Tell me the reason
2
Nuramira

I have one question, Why Malaysia needs to build more Independent Power Plant? Can I know what are the reasons?