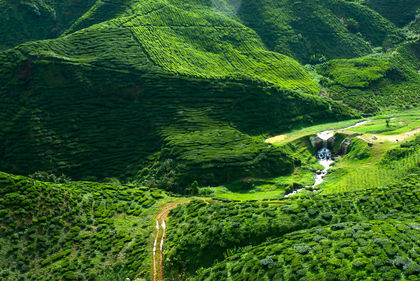 Agriculture remains an important sector of Malaysia's economy, contributing 12 percent to the national GDP and providing employment for 16 percent of the population. The British established large-scale plantations and introduced new commercial crops (rubber in 1876, palm oil in 1917, and cocoa in the 1950s). The 3 main crops—rubber, palm oil, and cocoa—have dominated agricultural exports ever since, although the Malaysian share of the world's production of these crops declined steadily during the last 2 decades. In addition to these products, Malaysian farmers produce a number of fruits and vegetables for the domestic market, including bananas, coconuts, durian, pineapples, rice, rambutan (a red, oval fruit grown on a tree of the same name in Southeast Asia), and others. The Malaysian tropical climate is very favorable for the production of various exotic fruits and vegetables, especially since Peninsular Malaysia seldom experiences hurricanes or droughts.

As rice is a staple foodstuff in the everyday diet of Malaysians and is a symbol of traditional Malay culture, the production of rice, which stood at 1.94 million metric tons in 1998, plays an important part in the country's agriculture. However, the overall production of rice does not satisfy the country's needs, and Malaysia imports rice from neighboring Thailand and Vietnam.

Logging in the tropical rainforest is an important export revenue earner in East Malaysia and in the northern states of Peninsular Malaysia. In 2000, Malaysia produced 21.94 million cubic meters of sawed logs, earning RM1.7 billion (US$450 million) from exports. Malaysia sells more tropical logs and sawed tropical timber abroad than any other country, and is one of the biggest exporters of hardwood. Despite attempts at administrative control and strict requirements regarding reforestation in the early 1990s, logging companies often damage the fragile tropical environment. Sharp criticism from local and international environmentalist groups gradually led to bans on the direct export of timber from almost all states, except Sarawak and Sabah. In December 2000, the government and representatives of indigenous and environ-mentalist groups agreed that there is a need to adopt standards set by the international Forest Stewardship Council (FSC), which certifies that timber comes from well-managed forests and logging companies have to be responsible for reforestation.

i would like to know how much total value of agriculture export in malaysia for the year 2009.tq.
6
Syed Kabir Mohan

It is known to be a fruitful knowledge to me since I really needed this information so badly and has helped me as well.Thank you.
7
shahjahan shah

Greetings,
I am an amateur in regards to this field and this field seems
to fulfill my working nature desires.
I believe the Government has plans and efforts to enhance this sector.
How can i participate or learn the right thing to get started with.

Greetings,
its been an issues about the ability of Malaysia to become 100% self-sufficient country.
thus, i want to ask your opinion about why Malaysia still export commodities even though there are shortage on supply in domestic consumption. it is because of higher price or other factor that contribute to that issues?
10
Aaftab Ahmad

I want to know more details about positive and negative agriculture impact towards future in Malaysia. Beside that i want to know that How far has Agricultural industry developed from 1957 till to date? hope you help me with my question.
Thanks.
12
Tahir

iwant to know about wheat farm in malaysia.where is getting wheat farming..actually i need yellow melon brownish
13
Sobia

As rice is a staple foodstuff in the everyday diet of Malaysians so what's the drawback that Malaysia imports rice from neighboring Thailand and Vietnam.
14
wasim.shorkot

As rice is a staple foodstuff in the everyday diet of Malaysians so what's the drawback that Malaysia imports rice from neighboring Thailand and Vietnam.
15
amromano david

what is the significant of perak man in agriculture in malaysia?
17
Farooq Ansari

I want about All kind of species i mean( indian species) are avaible in Malasiya agricultural regions.. what r the Types grow here.. plz, send me in details..
18
Joseph selvam

How to as help from out of Malaysia government
Because no help from (Jabatan pertanian dan Jabatan perikanan ) after disaster.
19
Altaf

where can I find lists of independent farmers in Malaysia?