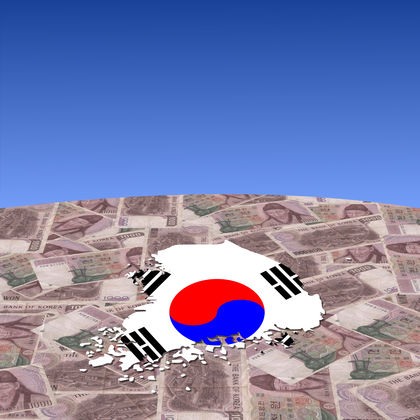 South Korea opted for a free-enterprise economy at the time of independence and has since sought to consolidate it with a great deal of success. The mainly agrarian nation began to industrialize in the 1950s, after the Korean War (1950-1953). Its relatively insignificant industries mainly served its domestic market until the early 1960s, when the South Korean government encouraged

massive industrialization. Unlike many developing countries, South Korea chose an export-led industrialization strategy to produce labor-intensive products that could be produced more cheaply than in North America and Western Europe and therefore competitive and exportable to those markets. Initially, the emphasis was on light industry products such as fabric and clothing, later supplemented by assembly-line production of electronic products like radios or black-and-white television sets. By the late 1960s, South Korea became a major producer of telecommunication devices and computer parts.

The service sector, consisting of growing industries like retail , tourism, and finance is now South Korea's largest economic sector, accounting for 51.5 percent of gross domestic product (GDP) in 1999, while industry, including construction and mining, claimed a 43.5 percent share. Construction, though still a major industry, is in the process of decline. The industrial sector meets most of the needs of the country, but its manufacturing branch cannot produce without heavy imports of capital goods . Agriculture, which was the main economic activity in the 1960s, accounted for only about 5 percent of GDP in 1999. This sector, including forestry and fishery, was expanded and modernized in the 1950s and 1960s, a process that has continued to this date. The South Korean government has encouraged and generously supported its growth, while protecting it from foreign competition. The agricultural sector produces basic domestic needs in rice, vegetables, and fruits, though South Korea is still dependent on large imports of grains, fish, and forestry products (timber). The World Factbook reported similar, but not the same estimates of each sector's contributions for the same year, noting that services contributed 53 percent, industry 41.4 percent, and agriculture 5.6 percent of GDP.

Trade plays a major role in South Korea's export-oriented economy. In 1999, exports accounted for 45 percent of GDP, a phenomenal increase from the 1970s when it accounted for about 6 percent on average. Apart from a limited trade in fishery products, manufactured goods, including light- and heavy-industry products and high-tech devices and parts, are the major exports.

The South Korean government has helped the industrialization of its country via protectionist measures (the imposition of import quotas and tariffs aimed at limiting foreign competition in South Korea) as well as generous government financing for emerging industries and subsidization to make their products competitive in international markets. These government measures continued until the 1990s when they provoked criticism on the part of South Korea's competitors and trading partners, including the United States, Japan, and the European Union. Their growing pressure on the South Korean government to open its market to foreign competition and to stop subsidizing South Korean exports forced it to begin addressing these demands. Nevertheless, the South Korean market remained highly protected until 1997 when the financial crisis hit many Asian countries, including South Korea. Heavy borrowing by the public and private sector , especially from foreign banks, created the crisis, as most of the borrowers were unable to repay their large debts. Devastated by the crisis, the South Korean government, which desperately needed foreign financial assistance to stop the wave of bankruptcies and closures of large enterprises, had to accept the conditions outlined by the International Monetary Fund (IMF) in its rescue package: to liberalize its closed and highly protective economy through reforms and make it accessible to foreign competition.

Liberalization has sought to change South Korea's economy from one where the state directs and controls economic activities into one where the private sector, including foreign enterprises, operate with minimum government regulation. This required the nation to embark on a program of privatization designed to minimize the role of the public sector in the economy. This unfinished process has resulted in the sale of government assets in some large corporations to foreign investors, and the privatization of all state-owned banks, except for 2 development banks. By 2000, the government still owns about 108 non-financial enterprises, most of which are planned to be sold. Liberalization has also resulted in the removal of government regulations that restrict the economic activities of domestic and foreign enterprises in favor of a less-regulated economic system. Liberalization has also involved the restructuring of financial institutions and big corporations, most of which have long survived on heavy borrowing from public and private financial institutions, including foreign banks.

By and large, the reform of the financial system has been more successful than that of big corporations known as chaebols (conglomerates). The financial system's reform has justified the closure or merger of many non-viable private and public banks that formerly survived on government assistance, as well as the privatization of most public banks. The government's tight control on fiscal and monetary activities has been loosened in order to facilitate domestic and foreign private investments. In 1998, a Foreign Investment Protection Act was ratified to encourage and to ensure the safety of foreign investments. However, the 1998 corporate reform program called the "Big Deal" has been, so far, less successful. The program aims at turning the weak chaebols into strong corporations capable of offsetting the destructive impact of the financial crisis so that they might grow and compete with large foreign corporations inside and outside the South Korean market. To that end, the South Korean government has tried to reduce excessive competition between big corporations and to encourage their merger to create viable enterprises. It has also sought to encourage them to eliminate economic activities that are not of crucial significance to their main operations. For the most part, the chaebols' reform program is yet to be implemented.

South Korea has a very large foreign debt , which in 1999 was equal to more than 25 percent of its GDP. The debt burden emerged as a major economic problem in the 1990s. Encouraged and facilitated by the South Korean government, banks and large corporations borrowed heavily to finance industrialization, creating a debt that amounted to US$163.5 billion in 1996, a 5-fold increase from 1990. The heavy burden of this debt, most of which was borrowed on floating rates by major private enterprises, created the 1997 financial crisis, which resulted in a series of bankruptcies and closures of major enterprises. This situation also undermined the credit-worthiness of most surviving enterprises and forced the South Korean government to seek IMF assistance to prevent the total collapse of the economy. The IMF arranged a rescue package of about US$60 billion. It also facilitated an agreement between the South Korean government and the foreign banks for rescheduling debts held by South Korean private and public debtors. The IMF-led rescue package prevented the worsening of the situation and contributed to a gradual economic recovery. The recovery and the economic reform with its tough regulations on borrowing by large enterprises have reduced the debt from US$159.2 billion in 1997 to US$148.7 billion in 1998 and to US$136.4 billion in 1999. Statistics from the first 4 months of 2000 indicated a small increase in debt (US$4 billion), pushing its total to US$140.4 billion. Financing of a short-term trade deficit caused by an increase in the prices of imported oil products seems to be the reason for this increase. However, a predictably poor economic performance of South Korea's main trading partners (the United States and Japan) in 2001, which could reduce its exports and create a trade deficit, would likely increase its foreign debt substantially. South Korea's foreign exchange reserves are significant (US$86.8 billion in early 2000), but are still much smaller than its foreign debt.

History and geography have shaped the development of the South Korean economy to a great extent. The division of the Korean Peninsula into 2 different political and economic systems has been a major factor. The Cold War rivalry between the United States and the Soviet Union made them the protectors of South Korea and North Korea, respectively. Each helped its protegé establish a peculiar economic system: free-enterprise in South Korea and a planned economy in North Korea. For South Korea, this situation led to a lack of ties with the 2 major supporters of North Korea: Russia and China, which lasted until the early 1990s when both sides began to normalize relations; South Korea established ties with Russia in 1990 and China in 1992. These ties have since expanded to the point where South Korea now produces some of its labor-intensive export products in China.

Threat of a North Korean military invasion forced the South Koreans to spend a significant amount on defense (US$9.9 billion in 1999, equal to 3.2 percent of GDP). However, South Korea's relations with North Korea have been improving since 1998 when President Kim Dae-jung initiated his "Sunshine Policy" to improve bilateral relations with the north. This policy led to a limited investment of South Korean corporations in North Korea, where local cheap labor is used to produce electronics for exports. South Korea's Hyundai group began tourist cruises to North Korea in 1998, but the trips were suspended after a South Korean tourist was arrested on spy charges. During that period, 80,000 South Koreans visited North Korea.

The South Koreans have backed the idea of peaceful unification of the 2 Koreas. Given the depth of North Korea's economic problems, they are not interested in an immediate unification, which would force them to spend an estimated US$1.2 trillion to rescue the North Korean economy. Instead, South Korea prefers a gradual process of unification in which it would help the economy of North Korea through modernization of infrastructure and by production of labor-intensive export goods in that country.

The bitter memory of the Japanese colonial era has also affected South Korean-Japanese economic relations. Japan has been a major source of equipment, machinery, and technology for South Korea, and has provided its largest source of tourism. Public resentment of the Japanese has limited their official and cultural ties. The situation has been improving since 1998 when President Kim Dae-jung took office. The heavy pressure of the 1997 financial crisis required Japanese economic aid and facilitated better official ties. The 1998 visit of President Kim to Japan broke the diplomatic ice between the 2 countries, and by mid-1999 a ban on Japanese cultural imports was lifted.

The South Korean economy has 2 major weaknesses. First is its heavy reliance on imported fossil fuels (oil and natural gas). South Korea is the second largest importer of liquefied natural gas (LNG), mostly from Malaysia and Indonesia. In 1999, it imported 874 million barrels of oil, 184.4 million barrels of petroleum products, and nearly 16.9 metric tons of LNG. These fuel imports accounted for 97.1 percent of its energy consumption in 1999, a significant increase from 1979 when fuel imports accounted for 73.4 percent of such consumption. Second, the South Korean economy depends heavily on imported capital goods and technology for its industries. Despite its emergence as a major exporter of light and heavy industrial products, its export industries require foreign machinery and equipment for production. While South Korea has surpassed Japan and the United States in selling memory chips, it still needs imported chip machinery to produce them. Another example is its automobile industry's reliance on imported parts and technology. Japan and the United States have been the major source of technology and capital goods for South Korea, constituting 40.5 percent of its annual imports in 1999.

Hi! My name is Becky and I have previously commented on similar articles. Pleas, feel free to contact me at krti@comcast.net.

HOLISTIC , PROMISES TO MEET MY RESEARCH NEEDS AT THE MOMENT . THANKS
3
Dabin

This website has really good info. about the good thing and downfall in South Korea that I needed for my economy class presentation
Thank you a lot!
4
Minsen Simon

A very helpful site as it helps me do my research assignment about country' economical background.