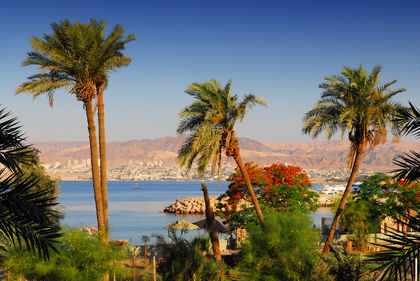 The Hashemite Kingdom of Jordan

Jordan, a Middle Eastern kingdom, is sandwiched between Saudi Arabia in the south and east, Syria and Iraq in the north, and Israel (including the West Bank of the Jordan River) in the west. The country has an area of 89,213 square kilometers (34,445 square miles) and a coastline of only 26 kilometers (16 miles) along the Gulf of Aqaba in the south. Jordan shares its longest border with Saudi Arabia, some 728 kilometers (452 miles). Amman, Jordan's capital, is located in the northwest of the country. Jordan occupies an area slightly smaller than Indiana.

The Jordanian population is almost entirely Arab except for pockets of people from Armenia, Chechnya, and a very small community of Circassians (the oldest indigenous people of North Caucasus). Although there are no accurate figures to date, it is estimated that up to 75 percent of the Jordanian population is Palestinian. The Palestinian people have been flooding into Jordan since the creation of the state of Israel in 1948, when they were either forced to leave their homes or subjected to such economic, cultural, and political hardship that they felt compelled to leave. There are existing tensions between the Jordanians who inhabited the country before 1948 and the refugees and immigrants who have since settled. The former group are known as the "East Bankers" and the latter group known as "West Bankers." Despite these tensions, the 2 communities are deeply inter-linked socially and economically. Many Palestinians living in Jordan refer to themselves as Jordanians, and it is hard to generalize about the loyalty and identity of the Palestinian population. In addition, there are 1 million foreign workers in the kingdom mainly from Egypt, Syria, and Iraq who perform menial, physical, and in some cases managerial jobs.

There is very little land for grazing because 90 percent of the country is classified as desert, but Jordan is usually able to supply its people with 30 percent of domestic demand for red meat and milk, with the remaining 70 percent needing to be imported. However, regular outbreaks of foot and mouth disease (a destructive disease that infects cattle and sheep) associated with very dry climatic conditions have pushed the production of red meat and milk 40 percent below the normal levels. In 1999 only 21,000 tons of red meat was produced, along with 171 tons of milk. In addition to this problem, the structural adjustment program adopted by the government has cut subsidies on water and fodder, which has forced 30 percent of breeders to close.

The drought was so severe in 1998-99 that the cereal harvest met only 1.2 percent of domestic needs instead of the usual 10 percent. The reduction in cereal supply was coupled with soaring demand for wheat, which reached 650,000 tons in 1999-2000 when the country was producing only between 40,000-50,000 tons a year. The agricultural sector's problems have caused the food gap (the difference between the amount of food a country produces and the amount of food it has to import) to widen and the import bill to appreciate. In 1995 Jordan imported US$61 million worth of fruits and nuts, and in 1999 this figure amounted to US$82 million, an increase of US$19 million. This trend has shaken the Ministry of Agriculture into reviving talks with the Sudanese government over the use of their spare land and water. Jordan currently has use of 24,200 hectares of land to the north of Khartoum given by the Sudanese government in thanks for the medical aid provided by Jordan in the 1980s.

Jordan's industry can be divided into 2 sub-sectors: mining/quarrying and manufacturing. In 1998 the industrial sector employed approximately 14 percent of the country's labor force and contributed 25 percent to Jordan's GDP. This sector is the much-needed provider of foreign exchange because it accounts for 68 percent of domestic exports.

Phosphates and potash are Jordan's main natural resources, and both of these minerals are used in the production of fertilizers. In 2000 Jordan was the second largest supplier of phosphates in the world after Morocco, producing 7 million tons and announcing proven reserves of 1.5 billion tons. The bulk of the phosphate industry is located in the south of the country near the Saudi Arabian border and is dominated by the Jordan Phosphate Mines Company, which is mostly owned by the government. Mining is certainly one of the strongest emerging markets in Jordan, and the government has made significant investments in the sector. The sector's output has been growing steadily with profits increasing from US$27 million in 1997 to US$35 million in 1998. The Jordan Phosphate Mines Company has been very successful in attracting international capital especially through contracts with Indian and Japanese firms.

Jordan has impressive proven shale oil reserves that have been estimated to amount to the equivalent of 29.5 billion barrels of oil. This oil has not been exploited yet because shale oil is difficult and costly to extract. However, in 1999 a Canadian firm, Suncor, entered into talks with the Jordanian government and hopes to produce 17,000 barrels per day (b/d), 67,000 b/d after 2004, and 210,000 b/d after the year 2008. This project would be a great boost for the Jordanian economy because it would make Jordan self-sufficient in energy production. Currently, Jordan imports 100,000 b/d of oil from Iraq.

Jordan has never had a large heavy industry base because it does not have the purchasing power to import the necessary and costly machinery. Second, the regional instability makes it an unattractive place for potential investors. The principal heavy industries, such as cement and fertilizer production, have developed only through heavy government intervention. Most private investment is concentrated in light industry such as consumer goods , textiles, food processing, and construction materials. In order to spur growth in the industrial sector, the Jordanian government has set up a series of free trade zones . Light industry has largely been driven by the growth of Jordan's pharmaceutical industry, which has been very rapid since 1998. In 2000, Jordan was exporting pharmaceutical products to over 30 countries. In 1995, US$125 million worth of pharmaceutical products were exported, and in 1999 this figure had increased to US$143 million.

The construction industry has been growing steadily since the oil boom in the 1970s, helped by the economy through the remittances flowing into the country from Jordanian workers in the Gulf. The fast-growing Jordanian population has led to growing urban communities, and the capital Amman has almost doubled in size over the last 30 years. Major construction contracts are usually held by foreign companies because they hold the large amounts of required capital. However, these companies have been sensitive to the needs of Jordan and have often used Jordanian architects and engineers in major projects. Local companies have nevertheless been instrumental in building more schools, roads, and waterways.

Jordan has a modern and well-functioning financial services sector. The banking sector is regulated entirely by the Central Bank and includes 21 banks of which 5 are foreign, 5 are Islamic, and 9 are commercial. The Central Bank of Jordan has encouraged smaller banks to merge by offering incentives and raising minimum capital requirements to 20 million dinars (US$28.2 million). This is being done in part to offset the overwhelming national presence of the Arab Bank, which holds 60 percent of the country's financial assets. The Jordanian government has also historically encouraged the setting up of microcredit institutions and, unlike many other Arab countries, Jordan is well-served by 5 highly accessible organizations that provide substantial funds to people in the agricultural, industrial, and housing sectors. In 1996 the first mortgage company was set up allowing Jordanians to reorganize the loans they had taken from the Housing Bank and reschedule their payments in a manageable way.

Jordan has long been dependent on outside capital to sustain its development programs. In the 1980s, the kingdom sought to develop its internal financial base by establishing a stock exchange, the Amman Financial Market (AFM). The establishment of the stock market was an important step in enabling the country to use its financial resources in a more efficient way by allowing both Jordanians and foreigners to invest in the private sector , thus helping the economy to grow.

An important free trade agreement was signed between Jordan and the European Union, which took effect in January 1999. It aims to eliminate tariffs on nearly 500 industrial goods over 5 years and to spur local industrial activity. Essentially, Jordan's products will be eased onto the European market as duties and taxes on European products are removed. Another significant part of the agreement will lift the ban on majority foreign ownership of Jordanian firms. Jordan also became a member of the World Trade Organization (WTO) in December 1999 and is currently in talks with the European Union regarding a free-trade agreement with the European Free Trade Association (EFTA). Jordan has been actively involved in promoting inter-regional free-trade zones, signing an agreement with Saudi Arabia that provides for a free-trade zone before 2005, and it is involved in similar talks with the Egyptians. In October 2000 Jordan also signed a free trade agreement with the United States, and as a result exports to the United States have risen rapidly. In 1999, Jordan provided US$13.1 million worth of exports to the United States, and in 2000 this figure had jumped to US$27 million.

Jordan has no territories or colonies.

"Keys to the Kingdom: Economy." The Hashemite Kingdom of Jordan. <http://www.kinghussein.gov.jo/economy.html> . Accessed February 2001.