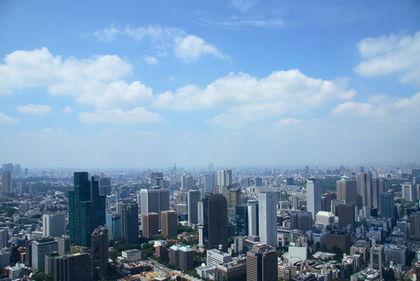 Once a predominantly agrarian society, Japan began its industrialization in the second half of the 19th century by adopting Western technology, and developed itself into a major industrial power by the first decade of the 20th century. Its economic and military power continued to grow in the following decades, enabling it to emerge as an expanding global power in the 1930s. The Japanese entry into World War II (1939-45) led to a devastating defeat marked by the U.S. atomic bombing of the cities of Hiroshima and Nagasaki. Apart from the destruction caused by the atomic bombs, the war devastated

the Japanese economy and destroyed most of its industrial base and infrastructure .

Thanks in part to U.S. support during the postwar occupation, Japan began restoring its free-enterprise economy and industries in the 1940s. The Japanese economy began to expand in the 1950s and continued its impressive growth as a highly modern mature industrial economy until the early 1990s, when it slowed considerably. By the 1980s, it ranked as the world's second largest economic power after the United States. In 1999, Japan's GDP was 45 percent of that of the United States, but larger than the combined GDP of France and Germany. By the first decade of the 21st century, Japan had established itself as a major exporter of industrial products.

On average, Japan's annual GDP growth was about 10 percent from the 1950s until the 1970s. The growth rate began to fall in the 1970s for external and internal reasons. The first "oil shock" in the early 1970s pushed up oil prices and significantly increased imported fuel costs. Since Japan's economy depends heavily on imported fuel, this development slowed economic growth. In 1974, the economy contracted by about 1.2 percent of total GDP. The second oil crisis of the late 1970s and the early 1980s slowed the economy to a smaller extent, causing a 0.4 percent annual shrinkage of GDP from 1980 to 1985. The situation worsened in the mid-1980s when an increase in the value of the yen increased the price of Japanese exports, leading to a decrease in global market demand. As a result, GDP growth dropped from 4.4 percent in 1985 to 2.9 percent in 1986. The damaged export industries sought to regain their competitiveness in international markets through massive relocation of their production to facilities abroad, notably in southeast Asian countries, where the cost of production was much lower than in Japan.

To offset the negative impact of the stronger yen on the economy and to stimulate growth in the domestic market, the Japanese government adopted a financial policy in the late 1980s to bolster the real estate and financial sectors. During this period, which came to be known as the "bubble economy," the Bank of Japan reduced its lending interest rate and the government increased its spending dramatically, which raised the value of stocks and inflated the price of land. This in turn stimulated spending and investment by both businesses and consumers. By 1991, stock speculation and large investments in real estate pushed prices up so much that the Bank of Japan was forced to intervene. This burst the bubble economy, and contributed to a decline in the Japanese economy during the 1990s. During that decade, Japanese products became less competitive in domestic and international markets because of higher prices.

The end of the bubble era initiated a period of sluggish growth and a loss of public confidence in the economy, both of which have continued into 2001. Although the government's deflationary measures (policies to reduce prices) triggered a decline in the Japanese economy in the 1990s, they did succeed in keeping inflation very low throughout the decade; annual rates were 1.8 percent in 1997,-0.3 percent in 1999, and-0.6 percent in 2000. The declines in the financial sector have resulted in higher unemployment through layoffs, once considered unthinkable in Japan. From its near-zero levels before 1991, the unemployment rate jumped to 2.2 percent in 1992, 3.2 percent in 1995, and 4.7 percent in 1999. The rate reached a record high of 4.9 percent in March 2000. Compared with many other developed economies such as Canada's, with an average unemployment rate of about 10 percent in the 1990s, Japan's unemployment rates since 1991 have not been very high. Yet they have been very high for a country which long prided itself on its traditions of "lifetime employment" for selected workers and strong employee loyalty. To avoid massive layoffs, many companies initiated a policy of reducing salaries, wages, and bonuses, thus lowering the living standards of many employees and decreasing spending, which, in turn, has prolonged the economic decline. Aimed at boosting the declining economy, Japan tried to restructure the financial sector in 1996 by introducing the so-called "Big Bang" reform measures. Its near zero-percent interest rate contributed to a short-lived increase in GDP (5.1 percent), but it failed to make growth sustainable.

The 1997 Asian financial crisis (which affected South Korea, Hong Kong, Thailand, Indonesia, Malaysia, and Singapore) was the major external factor responsible for Japan's economic downturn. It affected many markets of importance to Japan and worsened the Japanese economy by reducing export demand. The collapse of 3 major Japanese banks and a decrease in consumption further damaged the Japanese economy, which registered a 2.5 percent GDP decline in 1998, though it increased slightly, by 0.2 percent, in 1999 and about 1 percent in 2000.

Japan has benefited from continuous trade surpluses since the 1980s, amounting to $107 billion in 1999 and $95 billion in 2000. As a result, it has the world's largest foreign reserves, equal to $288 billion that same year. Four factors are responsible for these trade surpluses. First, Japan has a highly diversified advanced manufacturing sector capable of producing high-quality exportable products, and total exports were valued at $450 billion in 2000. Second, Japan's protected economy puts restrictions on foreign competition, including barriers to large-scale imports of foreign products. This situation has been gradually changing since the early 1990s, and the main barriers to foreign consumer goods , for instance, have been removed. Nevertheless, many restrictions have limited the flow of imports, which totaled $355 billion in 2000. Third, Japan's poor economic performance since the early 1990s has decreased demands for the import of various products, including fuel and raw material for commercial purposes, while also decreasing demand for many consumer products by a public concerned about unemployment and wage/salary cuts. Finally, Japan's aging population has, since the 1980s, gradually been spending less money on consumer products. If the population decreases as predicted, the shrinkage of the domestic market will have a severe economic impact on the Japanese economy.

Still, Japan is the world's second largest economic power and the second most technologically advanced economy after the United States. The most important sector of the Japanese economy is industry, which includes manufacturing, construction, and mining. Manufacturing is highly diversified and includes light industry, heavy industry, and high-tech. Manufacturing is the largest contributor to exports, but it is heavily dependent on imported raw materials and fuels. Industry is the second largest sector in terms of contribution to GDP (35 percent in 1999) and to the workforce (30 percent in 1999). Like other mature industrial economies, services form the largest economic sector, accounting for the largest contribution to GDP (63 percent in 1999) and to the work-force (65 percent in 1999). The growing service sector consists of many services such as financial, retail , and tourism. At the beginning of the 21st century, agriculture, including fishing and forestry, is its smallest sector, accounting for the smallest share of GDP (2 percent in 1999) and of the workforce (5 percent in 1999). However, this sector is highly developed and produces all of Japan's rice, but it does not supply all its agricultural needs, which makes Japan dependent on large imports of agricultural products, including foodstuffs. Being a major industry, fishing has expanded into the world's most highly modernized and efficient fishing industry, accounting for 15 percent of the globe's annual catch. Nevertheless, its products meet only a portion of domestic needs, making large imports of fishery products a necessity. Japan is also dependent on large forestry product imports, because its forestry industry can only satisfy a fraction of needs.

The Japanese economy consists of a large private sector and a small public sector . The economy benefits from a very dedicated and disciplined workforce whose members are known for their strong work ethic and loyalty to their corporations. It also enjoys advanced technology, which makes it capable of producing state-ofthe-art products. Close cooperation among suppliers, manufacturers, and distributors in close-knit groups called keiretsu also helps the economy grow fast. Such cooperation has received credit for the rapid rebuilding of the devastated Japanese economy in the post-World War II period. However, the economy lacks adequate domestic production of raw materials, fuel, and agricultural products; consequently, it is extremely sensitive to fluctuations in world prices for these items.

The Japanese economy is highly regulated. In the postwar period, this turned it into a well-protected economy practically closed to foreign competition by tariffs , restrictions, and quotas. Pressures by its trading partners and competitors (mainly the United States and the European Union) forced it to begin opening its market to foreign competition (goods and investments) in the 1980s. The economic decline of the 1990s inclined the Japanese government to encourage foreign investment by further liberalizing the economy. Since the early 1990s, the government has sought to reduce its role in the economy by initiating deregulation reforms that removed an enormous number of restrictive government regulations.

The Japanese government has not implemented the deregulation reforms evenly. The consumer-goods market is now open to foreign imports, while many restrictions on the financial sector have been removed. Deregulation in the air transport industry has increased foreign flights to Japan, especially from the United States, which now has an "open skies" pact with Japan. However, the reforms have been quite limited in the manufacturing sector due to a fear of massive unemployment caused by an extensive foreign presence in this sector. The increased competition will likely force domestic manufacturers to downsize their operations while bankrupting others, resulting in layoffs and unemployment. In short, the ongoing deregulation reforms have gradually contributed to a more open Japanese economy, although there are still many restrictions on economic activities.

History and geography have made an impact on the shaping of the Japanese economy. Japan's close proximity to the Asian Pacific countries (South Korea, Taiwan, Hong Kong, China, Singapore, Thailand, and Malaysia), all among the world's fastest-developing economies, has helped it expand its trade with them. These countries have been emerging as Japan's largest group of trading partners, accounting for 37.2 percent of its exports and 39.6 percent of its imports in 1999. These economies address some of Japan's major needs for fuel, minerals, and agricultural products, for example, while being large markets for its industrial products. Japan recognizes South Korea as the only legitimate Korean government, and its growing economic ties with South Korea have worsened Japan's relations with North Korea. North Korea's strong military force remains a security threat to Japan, a justification for spending $42.9 billion on defense (0.9 percent of its GDP) in the fiscal year of 1998-99. This is a small amount, with no major negative impact on Japan, but symbolically reflects concern about North Korea's military power. Russia's continued occupation of the Kurile Islands, captured by the Soviet Union in 1945, has prevented the conclusion of an official peace treaty between the 2 countries, and has limited their economic relations.

I really appreciate the article, i will to have more infor on this topic: The reason for the stagnation of japanese economy in the 1990s and comment on the prospect for a resumption of the economic growth.
I will be glad to receive your feedback.
Thanks..
2
Jegan

Its a very comprehensive presentation about Japanese Economy.
3
harish

quite elaborate and brief at the same time. thankyou