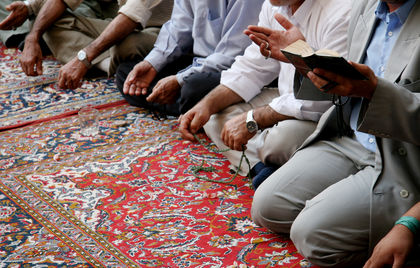 Iraq is located in the Middle East, between Iran and Saudi Arabia. Iraq is also bordered by Jordan and Syria to the west, Kuwait to the south, and Turkey to the north. A very small sliver of the Persian Gulf (58 kilometers, or 36.04 miles) abuts Iraq on its southeast border. With an area of 437,072 square kilometers (168,753 square miles), Iraq is slightly more than twice the size of Idaho. Iraq's capital city, Baghdad, is located in the center of the country. Other major cities include al-Basra in the south and Mosul in the north.

Some 97 percent of the population are Muslims. Shi'ite Muslims make up the majority (60-65 percent), while Sunnis comprise 32-37 percent of Muslims in the country. The remaining 3 percent is made up of Christians and other religious groups. The Kurds, descendants of Indo-European tribes who settled in Iraq in the 2nd century B.C., make up 15-20 percent of the population. Arabic is the official language, but Kurdish, Assyrian, and Armenian are also spoken.

Iraq's population growth has increased since 1993, despite the exodus of the middle class as a result of the Gulf War and the adverse effects of the United Nations (UN) economic sanctions imposed since 1991. Population growth before the 1991 Gulf War was as high as 3.6 percent annually. The government has strongly encouraged population growth. With a high fertility rate and a relatively young population, 45 percent of which is under 15 years of age, population growth is expected to remain high. Population growth dropped significantly to 1.9 percent in 1993 but resumed in recent years, with the growth rate reaching 2.98 percent in 1998. This rate suggests that the emigration of the middle class has slowed. The International Monetary Fund (IMF) also estimates that the effects of the UN sanctions have begun to fade. An estimated 1 to 2 million Iraqis live abroad, many as political exiles. The large majority of these are concentrated in Iran, after having been forced to leave in the wake of the 1990-91 Gulf War.

As in many developing countries, a majority of Iraqis live in urban areas. The population of urban areas has grown significantly since the 1960s at a rate of 5.2 percent annually. Baghdad and its suburbs are home to some 31 percent of the population. Rural-urban migration has eroded some of the ethno-religious and linguistic differences between regions, with the exception of the Kurdish minority, which is concentrated in the north. Iraqi society is dominated by tribal and familial affiliations.

Oil dominates the country's mining activity, and accounted for more than 60 percent of the GDP before the 1990 Gulf War. Iraq has 112,500 billion barrels in proven reserves—the second largest known reserves in the world. Prior to its war with Iran, which began in 1980, Iraq was also the second-largest exporter of oil in the world.

Oil production is concentrated in the north in Kirkuk, Jambur, Bai Hassam, Ain Zalah, Butman, and Baiji. Oil fields in the south include Rumaila and Zubeir, and until the Gulf War, oil was exported via the Gulf port at Khor al-Amaya. In addition, smaller fields can be found at Luhais, Nahr Umr, Buzurgan, Abu Ghuraib, and Jabal Fauqi. Iraqi oil exports consist of 2 types of crude. The "Kirkuk Crude," which forms the majority of exported oil, is extracted from the northern oil fields and exported via Turkey. The "Basra Light" comes from the fields in the south and is exported via the Mina al-Bakr terminal on the Persian Gulf.

Oil production and output has more than once been interrupted as a result of armed conflict, first with Iran and then with the allied forces during the Gulf War. Production before the Iran-Iraq war reached as high 3.5 million barrels a day (b/d) in 1979 but declined to 700,000-870,000 b/d with the start of the war in 1980. Although most damage to Iraq's facilities was repaired, and production was restored to 3.07 million b/d by the end of the 1980s, the Gulf War and subsequent UN sanctions imposed once more severely depressed both production and output capacity. Until 1996, Iraqi exports were forbidden under the terms of the UN sanctions, with the exception of 65,000 b/d exported to Jordan as part as a special deal worked out with the United Nations. As a result, oil production averaged only 500,000-600,000 b/d between 1990 and 1996, with the majority used for domestic consumption.

Iraq was allowed to resume partial exports in 1996, as part of the food-for-oil program designed to provide for the humanitarian needs of the Iraqi people. Oil production was estimated at 2.52 million b/d in 1999, 1.76 million of which are exported under the food-for-oil program. Local consumption accounts for 500,000 million b/d, while an estimated 166,000 million b/d are believed to be smuggled through Turkey and Iran. In June 1998, Iraq was permitted to import spare parts in the amount of $300 million every 6 months to repair its oil facilities. In December 1999, the value of imports was doubled to $600 million per 6 months, but Iraq was allowed to purchase parts only from a list of parts drawn up by the United Nations. Despite an increase in production, which reached 2.49 million b/d in July 2000, the oil sector continues to suffer from the lack of adequate investment and of the kind of Western expertise that was once available to Iraq before the war.

Before 1972, a consortium of British, U.S., French and Dutch companies virtually dominated the oil industry through the Iraqi Petroleum Company and its associates. This company was nationalized by the Iraqi government in 1972, and the U.S. and Dutch interests in the last remaining foreign oil firm—the Basra Petroleum Company—were confiscated because of their governments' pro-Israel stance during the 1973 Arab-Israeli war. The entire oil sector was nationalized in December 1975 and placed under the control of the state-owned Iraqi National Oil Company. In the late 1990s, however, and as a direct result of the sanctions, the Iraqi government has once again allowed production-sharing agreements with foreign companies, mainly Russian and Chinese, to develop the oil sector and increase production to 3.4 million b/d in the short-term and 6 million b/d in the medium-term. These agreements, however, are contingent upon the lifting of the UN sanctions, and it remains to be seen whether the United States will allow the Russian and Chinese firms to benefit from the development of the Iraqi oil sector.

Iraq also has phosphate deposits located at Akashat near its border with Syria, which are used to produce fertilizers. Sulphur deposits can also be found in Mishraq. European companies were involved in the mining of sulphur before the Iran-Iraq war, but these efforts came to a standstill during the war and have not resumed. The mining of both phosphates and sulphur has largely remained limited in scope due to the dominance of the oil sector.

The manufacturing sector is the second largest non-oil sector, accounting in 1993 for 13 percent of the GDP. The sector's contribution to the GDP in 2001 is hard to assess in the absence of government data about manufacturing activity in the country. Total employment in manufacturing in 1989 stood at 968,000 or 22 percent of the labor force.

Historically, the sector has been dominated by oil refining and natural gas processing industries. Refineries are situated in Baghdad, Basra, al-Hadithah, Khanaqin, Kirkuk, and Qayyarah, and by the late 1980s were producing a total of 743.3 million barrels of petroleum and 3.7 billion cubic meters (131 billion cubic feet) of natural gas per year. Since the 1970s, Iraqi companies have processed iron and steel at plants located at Khawr az-Zubayr. Other manufacturing activities include the production of advanced military hardware, tractors, electrical goods, car assembly, truck manufacture, aluminum smelting, detergents, and fertilizers.

Since the mid-1970s, Iraqi industries have been under the control of the state. The government experimented with privatization in late 1988, right after the end of its war with Iran, in an effort to boost manufacturing production. The state, however, continues to control all heavy industry, the oil sector, power production, and the infrastructure, while private investment is restricted to light industry. An important reason for the failure of the privatization program was the price controls that the government was forced to introduce following the outbreak of popular unrest over rising prices in 1989.

Overall, the sector has been characterized by mismanagement and constant policy shifts, which severely hindered its development. In the 1970s, the government encouraged the development of local food processing and building supplies industries to substitute for imports, but by the late 1970s, the government shifted its focus toward the development of heavy industries, such as iron and steel. The initiative, however, never took off. Efforts to expand the manufacturing sector came to a standstill during the Iran-Iraq war, as resources had to be reallocated to finance the war, and greater emphasis was placed on increasing the output of existing industries.

In the 1990s, the manufacturing sector has also been severely hurt by the UN sanctions and has shrunk considerably as a result. The UN closely monitors the import of industrial raw materials to ensure that implements necessary for the production of weapons of mass destruction do not enter the country. The sector has also been hurt by the lack of the foreign currency needed to purchase imported parts.

The construction sector has been a major contributor to the economy for most of the last 3 decades. The sector's growth can be attributed to the government's continuous involvement since the 1970s in reconstructing war-damaged facilities or in expanding the military infrastructure. Spending on construction dropped significantly in 1991, reaching ID578 million, down from ID1.7 billion in 1990. Spending on construction, however, has been on an upward trend since 1991, reaching some ID20 billion in 1994.

Financial services in Iraq are fairly outdated. As a result of the nationalization of banks and insurance companies in 1964, all financial transactions are controlled by the government through the Central Bank of Iraq, which is responsible for issuing and monitoring all aspects of the Iraqi dinar. Black market currency dealings are prohibited but continue to take place. International banking transactions are undertaken by the Rafidain Bank, which represents the government in all transactions not undertaken by the Central Bank. The Rasheed Bank, established in 1989, deals with domestic transactions. The banking sector was liberalized in 1991, paving the way for the establishment of 6 new banks.

Iraq has a poor retail sector. Baghdad's once well-developed commercial centers have been severely hurt by the UN sanctions, and the lack of imported goods has forced many of them to close in the last 10 years. The majority of shops in major cities, including Baghdad, consist of small family-owned and-run businesses. Small shops and temporary road stands also characterize the majority of towns in the interior of the country.

Iraq has no territories or colonies.

Batatu, Hanna. The Old Social Classes and the Revolutionary Movements of Iraq: A Study of Iraq's Old Landed and Commercial Classes and of Its Communists, Bathists, and Free Officers . Princeton, NJ: Princeton University Press, 1978.

THANK YOU FOR YOUR ARTICLE AND I WANT TO ASK YOU ABOUT the address site of mine and minerals Iraq kordestan and your famous geologists that do activity about mine and minerals in Iraq.
have you got the organization of mineral and mine
thank you
3
Allie

This site is awesome and i use it all the time! Never mind this site stinks like poop.
4
Chen T. Zafico

thank you.. your article is a big help to my powerpoint presentation!! thanks alot..