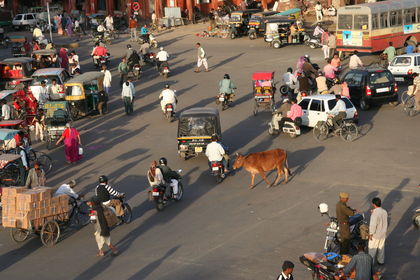 The population of India is estimated to have passed the 1 billion mark in May 2000 (1,014,000,000; July 2000 estimate). For centuries, India has been a land of startling contrasts. Maharajahs and millionaires, snake charmers and poor farmers, beauty queens and burnt brides, and a population explosion juxtaposed with high child and maternal mortality. The billionth citizen of this ancient land entered a country with 40 political parties and 24 official languages, each spoken by at least a million people. A cultural preference for male children (who are thought to bring prosperity to a household) has resulted in a significant gender disparity with 927 females to every 1,000 males. The 2 relatively prosperous northern states of Haryana and Punjab have the largest gender disparities. Only Kerala—the socialist -run state—has a gender balance of 1 to 1. Feticide (the killing of a fetus), infanticide (the killing of an infant) or, later in life, forced suicide are still the lot of some Indian girls and young women. Though India was

among the first countries to adopt population-control policies, those efforts have largely failed. The population continues to grow at the rate of 1.8 percent per year, and by 2025 India will likely overtake China as the world's most populated country, with a projected population of 1.42 billion. A newly established National Population Policy may lead to a reduction in the rate of population growth and to a stabilized population of slightly more than 1.5 billion by 2045. The immediate aims of the policy are to address the unmet needs of the health-care infrastructure , including the family-planning services, and to integrate delivery of basic reproductive and child health care. Special emphasis will be put in containing population growth in the states of Bihar, Madhya Pradesh, Orissa, Rajasthan, and Uttar Pradesh, which currently constitute about 45 percent of the total population of India.

it helped in making my english project I am thankful of the website.
3
vishvajit

It help in making my school EVS project I am thankful of the website.
4
Rajiv Gupta

I'm thankful to the website. It help me in my school homework.
7
himanshu

This is really helpful information keep it up!! Im thankfull for this website!
9
Niwas Bhoyar

What a website it was amazing. I'm so happy to get this fabulase inffomation.
11
Kajal patil

It help me in making my English group project. This website is really very good. I am very thankful to this website.
13
Firoz

this website is very helpful .
it help to complete my uncompleted topic
I am very thankful to this website...
14
Krishna kimothi