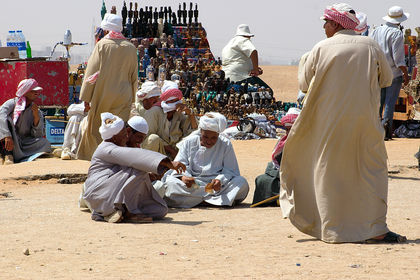 For decades after independence in 1947, India embarked on a program of autarky (national economic self-sufficiency) which included import substitution policies. By 1991, however, a sluggish economy combined with the forces of globalization led to a more open Indian economy. There was simultaneously a gradual rise in exports, imports, foreign direct investment (FDI), and overall economic growth. In the 1990s, exports of goods and services rose from 6.2 percent to 8.2 percent of total output. By the end of the decade, however, growth in exports began to level off due to reduced international demand, especially with India's main economic partners, the United States and the European Union (EU). Indian exports were further hit by serious competition from east Asian countries, which had recently experienced depreciated domestic currencies, which led to a decline in global prices for their manufactured goods. As a result, exports of Indian textiles, chemicals, machinery, electronic goods, and automotive parts all began to decline.

As compared to a couple of decades earlier, however, the size of India's foreign trade has noticeably expanded, both in absolute terms and relative to the country's GDP. Exports have again picked up since 1999, when they showed a 13 percent growth. Imports have also ballooned, showing an average of 20 percent growth per year during 1992-2000. Total exports in 2001 are expected to be near US$46 billion and total imports at US$51 billion. Petroleum constitutes the largest import item at more than US$6 billion and accounts for 14 percent of total imports in 1999. Petroleum imports may be as high as US$17 billion in 2001. Gems and jewelry constitute the single largest export item, accounting for 16 percent of exports and earning about US$4.5 billion in 1999. The top 3 export destinations of Indian goods were the United States, Britain, and Germany, which together

constituted one-third of total Indian exports in 1999. In turn, the top 3 import sources were the United States, Britain, and Belgium, together constituting 21 percent of total imported items.

In 2001, FDI in India was expected to near US$4 billion. To further seek buyers for Indian products, Indian companies have also major plans for investing abroad. Several Indian information technology companies, for example, have plans to outsource some of their production to China, where labor is as much as 20 percent cheaper. Furthermore, India's largest car manufacturer, Mahindra and Mahindra, may soon be entering the European market via the production of tractors in the Czech Republic. One Indian investment that is already operating abroad is a US$180 million fertilizer plant in the Persian Gulf nation of Dubai.

Does anybody know about current international trade issues on India?
2
Vijay Kumar Sharma

Have various questions with regards to the overseas comadity trading i.e. importing and exporting the same goods to another country through Indian company.