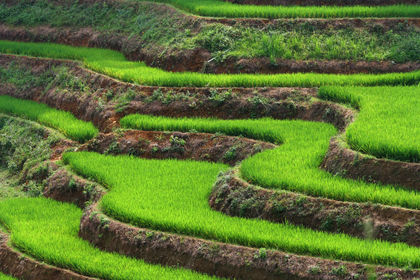 India's agriculture is composed of many crops, with the foremost food staples being rice and wheat. Indian farmers also grow pulses, potatoes, sugarcane, oilseeds, and such non-food items as cotton, tea, coffee, rubber, and jute (a glossy fiber used to make burlap and twine). India is a fisheries giant as well. A total catch of about 3 million metric tons annually ranks India among the world's top 10 fishing nations. Despite the overwhelming size of the agricultural sector, however, yields per hectare of crops in India are generally low compared to international standards. Improper water management is another problem affecting India's agriculture. At a time of increasing water shortages and environmental crises, for example, the rice crop in India is allocated disproportionately high amounts of water. One result of the inefficient use of water is that water tables in regions of rice cultivation, such as Punjab, are on the rise, while soil fertility is on the decline. Aggravating the agricultural situation is an ongoing Asian drought and inclement weather. Although during 2000-01 a monsoon with average rainfall had been expected, prospects of agricultural production during that period were not considered bright. This has partially been due to relatively unfavorable distribution of rainfall, leading to floods in certain parts of the country and droughts in some others.

Despite the fact that agriculture accounts for as much as a quarter of the Indian economy and employs an estimated 60 percent of the labor force, it is considered highly inefficient, wasteful, and incapable of solving the hunger and malnutrition problems. Despite progress in this area, these problems have continued to frustrate India for decades. It is estimated that as much as one-fifth of the total agricultural output is lost due to inefficiencies in harvesting, transport, and storage of government-subsidized crops.

USE WASTE LAND WITH MINIMUM WATER USAGE AND GET GOOD RESULT OUT OF HARVEST.
2
maha

THANKYOU SO MUCH ! THIS WEBSITE HELPED ME IN MAKING MY SOCIAL SCIENCE PROJECT...
3
udyan sharma

thanx so much you helped me in my sst project. maha are you from new era
4
AJESH

THANK YOU SO MUCH!THIS WEBSITE HELPED ME IN MAKINNNG MY SCIENCE PROJECT...
5
nivrutti

thank u so much, this website my helped in aggricutture project
6
vinod

very nice info it gave me a lot of help for my E.E project
8
vero

I LOVE THIS WEBSITE. IT GAVE ME ALOT OF INFORMATION FOR MY INDIA PROJECT IN school
9
kuldeep singh

Thank you very much i got the satisfactory answer of my query.
10
dheeraj

i am satisfied for your kind imformation.i love this website.it is so better to improve this site publication
11
pooja

This website help me in my school project which I couldn't do.
Thanks to this website for helping.
:)
12
vidhi

Thanks to this website.
This website helped me in my school reference work-practicals.
Thanks for your kind information
13
Ashish chand lotiyal

This website is very useful,
it really helped me a lot!
15
S.Vijayakumar

Thank you
This website helped me in my daughter school Project.
Thanks for your kind information
16
Abdullah Rashad

Thanks to this website.
This website helped me in my school reference work-practicals.
Thanks for your kind information
17
krupasagar

Thanks to this website & very useful in my education field. &also use in agriculture reaserch field.
18
santosh

thanks this website to help me my practical wokk in college
19
K. K.

IT IS A VERY USEFUL WEBSITE.IT GIVE ALL TYPE OF INFORMATION
21
vineeth yadav

THIS IS REALLY EXCELLENT INFORMATION ABOUT AGRICULTURE IN INDIA.THIS INFORMAATION HELPED TO COMPLETE MY SOCIALL STUDIES PROJECT.. I THINK I WIL GET FULL MARKS.
22
Fahim

This very informative and very useful for people doing projects and experiments regarding agriculture of INDIA . thank u for providing such a good information :)
24
sangeeta

This really helpful for me.It is useful for me. thank you very very much.
25
AKR

THIS IS VERY HELPFULL TO MY STUDIES.BECAUSE IM AN AGRICULTURE STUDENT
28
Akanksha Choudhary

THANK YOU SO MUCH FOR THIS INFORMATION .THIS CONCEPT IS HELP FOR MY INTERVIEW
30
Chingme

Thank you so much help me in making my agricultural project.
32
senthilkumar

Thanks you so much,this website help me to know a bout such information
35
sathish yadav

This website is so many used for the real life and thank you so much.
38
Rakshitha

Thank You
It very use full and informative site. it use full for researcher, student and teacher farmer
41
javad

hi.thanks for useful article .this helped me very much.
42
siddhu sinnur

It is very useful.And i love this website.This is a great information and this is helped me to do my ppt
44
varun

Vettiver how to planting what type soils planting export details please tell about that
47
C.Arumugam

We are 170 years Company in India . We manufactured and trade Agricultural Products to all over india .
48
Venky

Thanks a lot I am Naval Thakur
This website helped me a lot , it helped me completing my social science homework and it also gave an answer to my query
50
Parth naik