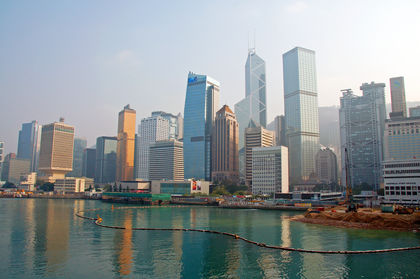 Industry has experienced a slow decline over the last 2 decades. Its contribution to GDP was 15.2 percent (equal to US$23 billion) in 1998, a significant decrease from its 1990 contribution of 17.7 percent. Its share of the workforce, which was 28 percent in 1990, dropped to about 15 percent in 1998. The decline of industry has been the outcome of a steady contraction in manufacturing, the result of the continued relocation of manufacturing establishments to mainland China. Manufacturing's share of GDP sharply fell from 24.3 percent in 1984 to 6.2 percent in 1998. The constant expansion of the service sector has also contributed to the process of decline. Other activities, such as construction, energy, and mining, are not significant enough to stop the steady decline of the industrial sector.

There were 23,553 manufacturing establishments in Hong Kong in 1998. Known as "flatted factories," these establishments are mostly very small and located on 1 or 2 floors of a high-rise building. The average number of employees per establishment is 10. The migration of many large and labor-intensive industries to mainland China resulted in the loss of more than 500,000 industrial jobs in the 1990s.

Certain factors have created "natural" barriers to the growth of the manufacturing sector and have forced a peculiar pattern of development on it. Scarcity of land, the absence of mineral resources, the high cost of labor, and the close proximity to China have ruled out the establishment of heavy industry or other land-and labor-intensive industries in Hong Kong. Prior to the 1980s, Hong Kong produced mainly labor-intensive consumer products, including food, beverages, clothing, textiles, printed products, and fabricated metal products. Being a resource-and land-rich country with a very low-wage labor force , China became a "natural" place for Hong Kong's manufacturing in the 1980s. Improved relations between the 2 sides made the relocation of major industries to China feasible. China's growing interest in foreign investment facilitated the process.

The result was a re-structuring of Hong Kong's manufacturing sector. Labor-intensive and sophisticated industries were moved to China, mainly to the neighboring Guangdong Province, while light and capital-intensive industries were kept in Hong Kong. This trend is continuing. Given the removal of all political barriers and the willingness of the Chinese government, it is simply logical for Hong Kong industrialists to continue their establishment of the labor-and land-intensive industries in China where they have access to minerals, low-cost labor, and abundance of land. Their products are exported via the very modern and efficient port of Hong Kong.

The existing Hong Kong industries are small-scale operations. They are involved mainly in certain manufacturing processes pertaining to re-exporting goods produced in China by Hong Kong-owned establishments. These processes can involve the packaging of goods produced on the mainland, for instance. However, there are still export-oriented industries that produce textiles, electronics, plastics, and watches and clocks. The textile industry is the largest industrial employer and accounts for the bulk of annual domestic industrial exports, accounting for 45 percent (US$11.3 billion) and 49 percent (US$10.79 billion) of those exports in 1998 and 1999, respectively.

The electronics industry, including telecommunications, is the second largest export earner, but it is small and underdeveloped. The value of its exports was US$4.24 billion in 1998 and US$3.55 billion in 1999. Its products are generally of lower quality compared to other Asian products such as those of Singapore and Taiwan. Its rapid growth over the last 3 decades is owed to large foreign investments and transfer of technology. This situation makes it highly dependent on foreign sources for investments and parts; local industries can produce only 20 percent of the necessary parts. The electronics industry produces various sophisticated products, including semiconductors, computers, televisions and telecommunications equipment. The Hong Kong government has sought to help expand this industry, especially in the fields of computer products, in order to diversify the economy, now heavily dependent on services.

The plastics industry has been shrinking in Hong Kong, with most of its manufacturing establishments being moved to China. Nevertheless, Hong Kong is one of world's largest toy exporters. The exports of plastic goods generated about US$210 million in 1998 and US$163 million in 1999.

A major component of the industrial sector is the construction industry. It accounted for 6.1 percent of GDP and employed 2.2 percent of the workforce (72,253 employees) in 1998. In the aftermath of the Asian financial crisis, a decline in construction activities lowered its share of the workforce to 2.1 percent (71,789 workers) in 1999, but government-financed infrastructure projects increased its share to 79,300 employees in June 2000. The constant government investment in infrastructure and private sector investments in related fields (such as housing and commercial establishments, which total more than 50 percent of investments in the sector) make construction a viable industry.

The industry has gone through periods of expansion and contraction for political and economic reasons since the 1980s. Politically, the smooth hand-over of Hong Kong to China encouraged investment in private and commercial construction projects in 1998 and 1999. Recent economic factors include a 1994 government policy on buying and selling unfinished apartments. That policy made those transactions more difficult and therefore lowered property prices, resulting in a reduction in investment in apartment building projects. Thanks to a wide range of road and railway expansion projects, the construction industry is expected to experience a period of growth in the first half of the decade (2000-10).

The utility industry is a vital sector in Hong Kong, which lacks freshwater and fossil energy resources. As discussed earlier, several companies ensure uninterrupted supplies of water and energy (electricity and fossil fuel) for private and commercial purposes through imports of water and both limited local production and large imports of energy. Despite its importance, the utility industry is small and employs an insignificant portion of the work-force, but its contribution to GDP is significant (2.4 percent in 1998).

There is no mining industry of any significance in Hong Kong, as the territory lacks mineral resources. The share of mining and quarrying activities of GDP was about 0.02 percent in 2000. Cement production is the most important activity of this sector.

Where i can get the information of the industry P/E ratio for Hong Kong market?
2
Robin Cameron

hi. i'm in the uk. i'm trying to find the email and address for HongKong Kingly Industrial. can you help please?