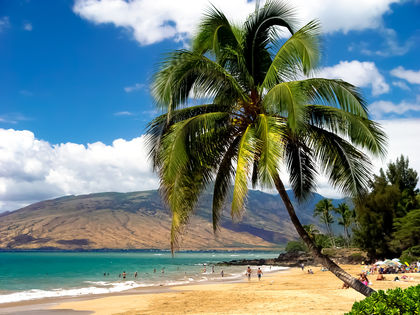 Fiji is a Melanesian island group located in the South Pacific at 175 degrees east longitude and 18 degrees south latitude. The islands are about 1,770 kilometers (1,100 miles) north of New Zealand. The group comprises 332 volcanic islands scattered in a horseshoe across an area of ocean some 595 kilometers (370 miles) across. Fiji has a total land area of 18,270 square kilometers (7,054 square miles), of which 87 percent is made up by its 2 largest islands, Vanua Levu and Viti Levu. Comparable in size to New Jersey, with a coastline of 1,129 kilometers (702 miles), Fiji has more land mass and people than all the other Melanesian islands put together. The capital of Fiji is Suva (pop. 77,366), on the southeast shore of the island of Viti Levu. The country's highest point, also on Viti Levu, is Mt. Victoria (Tomanivi) at 1,324 meters (4,344 feet).

Only a third of Fiji's 332 islands are inhabited, and three-quarters of Fijians live on Viti Levu, the largest of them. In 1996 53.6 percent of the population lived in rural areas and 46.4 percent in cities. Of the latter group, 46.7 percent, or a little less than a quarter of the total population, live in the greater Suva district. The other

main urban center is Lautoka (pop. 36,083), on the northwest shore of the island of Viti Levu.

Fiji's ethnic composition is largely split between indigenous Melanesian Fijians, who constitute a narrow majority (51 percent), and those of Indian descent (44 percent); the remaining 5 percent is comprised of Europeans, Chinese, and other Melanesians. Fiji's religious situation reflects this division: 52 percent are Christian (including 37 percent Methodist and 9 percent Roman Catholic), 38 percent Hindu, and 8 percent Muslim. The proportion of Fijian Indians in the population has been decreasing since 1987, when army forces allied with indigenous Fijians staged a coup against the Fijian Indian-led government. (Fijian Indians are primarily the descendents of Indian indentured laborers brought to Fiji by British colonizers between 1879 and 1916.) As recently as the 1986 census, Fijian Indians made up a slight majority in population, with 48.7 percent as compared to 46 percent for the indigenous Fijians. But a slightly higher indigenous birthrate—27.3 per 1,000, compared to 17.2 for the Fijian Indian population—and heavy rates of Indian out-migration (the large-scale departure of persons from one region to another) have changed the population balance. The out-migration rate for 2000 is estimated at 3.6 per 1,000 per year, with most people moving to the United States, Australia, and New Zealand. Ongoing interethnic disputes threaten to further change population distribution.

Although Fiji lacks a heavy industrial base, it has made significant progress in mining and manufacturing. Mining and quarrying account for around 2.7 percent of Fiji's total GDP (1999). Most of this revenue is generated by gold, which in 1998 made up 6.9 percent (US$35 million) of Fiji's foreign exports. Although production capacity has increased, the low price of gold has depressed earnings. The dip in prices saw growth in production tumble from 30.9 percent in 1996 to 2.9 percent in 1997. In 1998 mining in 2 gold mines was suspended and further exploration discontinued. Fiji's uncertain political climate has also made it difficult to attract the foreign financing it needs to sustain the industry. In September 2000 the government was forced to issue tax concessions worth nearly US$2 million to rescue one its largest mining companies and preserve its 2,000 jobs. Fiji also produces silver and copper. When the copper mining venture launched at Namosi in 1997 hits full production, earnings of as much as US$178 million per annum are possible.

Responsible for 14.5 percent of GDP in 1999, this sector is one of Fiji's diversification success stories. Whereas it once comprised largely the processing of agricultural products, especially sugar and timber, the introduction in 1987 of tax exemptions for factories exporting more than 70 percent of their annual production has seen the rapid emergence of a vibrant garment industry. Since 1986 the volume of garment production has grown twelve-fold, and in 1998 it provided 30 percent of Fijian exports, valued at US$152.4 million. However, the Australian government's refusal in September 2000 to renew its highly favorable tariff concessions for Fijian imports (a reaction to the coup) has clouded the future of this industry.

. Fiji's beaches, climate, and relative proximity to Australia and New Zealand have helped tourism become one its most important revenue earners; in 1997 hotels, restaurants, and cafés made up 3 percent of GDP, accounting for 40,000 jobs. But tourism has been one of the biggest casualties of Fiji's political upheavals. In 1999, according to the Fiji Islands Statistics Bureau, 409,995 tourists visited Fiji, bringing with them US$274 million in foreign exchange. This represented an increase over the previous year of 38,000 visitors and US$30 million, a growth rate that showed every sign of continuing. But after the 2000 coup, visitor numbers dropped drastically, forcing some of Fiji's biggest resorts to close. Despite an energetic campaign by the industry to restore visitor confidence, and government tax incentives for investors, this sector has not recovered.

Fiji's commercial banking sector is served by 6 banks, including the Bank of Hawaii and several other merchant banking providers and insurance companies, as well as the Fiji National Provident Fund (NPF, Fiji's national pension scheme), and Fiji Development Bank. The government-owned banking sector, on the other hand, is less stable. Mismanagement of the National Bank of Fiji led to its near-collapse in the mid-1990s and forced the government in 1997 into a US$105 million bailout. The relationship between government and commercial banking sectors has yet to be properly defined. As part of its economic stimulation program, the Fijian government is working to strengthen the financial system by expanding the Fijian Stock Exchange, decentralizing the NPF, and allowing greater investment flexibility for insurance companies.

With more than half of Fiji's population living in rural areas, and a large proportion of these outside the wage and salary economy, Fiji's retail sector is understandably small. Fiji's isolation makes imported goods expensive, further inhibiting its consumer culture, and leaving most retailing at the level of basic foods, clothing, and essential merchandise. The capital, Suva, has a variety of stores, including specialty stores that cater to tourists. The larger retail sector, taking into account wholesale suppliers, hotels, and restaurants, accounted for 15.2 percent of Fijian GDP in 1999.

1874. Britain, fearing Fiji will fall to another power, accepts Fiji as a colony.

Fiji has no territories or colonies.

heyy is this a good island? im doing this report and i wanna use this island ive been doing alot of research and you guys web sit is the best!
2
Manasa ravulolo

this helped me alot on a report i had to do on Fiji...thanx
4
shifali

heyy the result is amazing because the site is great. ive been researching since a week i could not get any best but u guyz are amazing with the information
5
Apisalome Tora

Fiji is geographically located on the border of Melanesia and Polynesia it is known as the cross roads of the this two cultures. The Fijian culture is Polynesia in nature and has no similarities with the Melanesia culture if you compare the two eg. the chiefly system and language. To say that Fiji is Melanesian based on skin complexion is being naive. There is is a strong Polynesian influence in the Fijian culture and that needs to be acknowledged.
6
Liti Vaka

Very nice site for research. one little comment: Under monetry Unit fiji no longer have 1 cents and 2 cents.

This information is very helpful to me which then can make my research a successful one.
vinaka vakalevu
9
meenal

Yes the information is great and to add there is no more 1 and 2 cents used and also no $1 note is seen but $2 and $1 coins came in and $100 note has came in and lots of ather changes has taken place...thnx to Fiji
10
haley