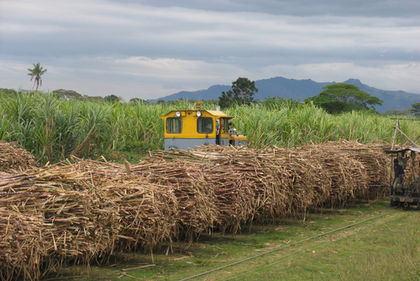 Agriculture continues to be the bedrock of the Fijian economy, accounting in 1999 for some 16 percent of its GDP and two-thirds of its 310,000-strong workforce. Sugar, the most important agricultural product, generated almost 30 percent of Fiji's agricultural GDP in 1998, and 15 percent (through sugar processing) of its manufacturing GDP. The 364,000 tons of sugar that Fiji produced that year earned the country some US$122.9 million. The commercial future of this industry depends on the resolution of the property system that has been in place since 1909, when the British colonial government froze land-ownership titles in an attempt to protect indigenous (Fijian) property owners. As a result, only 8 percent of a total of 607,982 acres (1,519,956 hectares) is freehold (privately-owned); the remainder is either tribal-(83 percent) or government-owned (8 percent) land. As of 1993, only 9.9 percent of that total acreage was arable, with most of it in tribal hands or leased to Fijian Indian farmers, who produce 90 percent of Fiji's sugar-cane. As these leases expire and the land is returned to indigenous growers, major disruptions in sugar-cane production can be expected.

With 64.9 percent of Fiji's land area being forest and woodland, timber is also economically important, especially pine and mahogany. Attempts since the mid-1980s to bolster the industry, and offset Fiji's dependence on sugar, have encouraged significant strides in timber production. In 1999 timber provided US$27.6 million in export revenue, a 45 percent increase over 1994 levels.

Fiji also exports copra (dried coconut meat), ginger, and coconut oil, as well as bananas, rice (a product for which Fiji is aiming at self-sufficiency), cereals and vegetables, pineapples and other tropical fruit. Copra, in particular, has benefitted from the removal in 1998 of the ban on its export; since the licensing of a second copra-buying company, prices for producers have increased considerably. The discovery of kava's (a shrubby pepper) medicinal qualities and its potential as a pharmaceutical ingredient have also fueled the growth of a small but promising export industry.

how come is the tuna in fiji's fourth largest export earner..???
i thought i thought sugar is fourth export eaner...
2
Semisi Pone

I would like to get Mrs Fusi Caginavanua's email. Is she still the Secretary for Agriculture?
3
ntiu

the article mentioned that in 1999 the country's GDP was 16%, now as i have read and head over the news that it has decreased to 12%. i want to know where does the problem lie and who is to blamed? public has the right to know since greatly contribute to the countries economic development by buying the local produces and actually producing it anyone can explain that critical situation.
4
tex

I think Mrs Fusi left the Agric Ministry in 2006. GDP from agriculture has dropped mainly because of the non-renewal of land leases to sugarcane growers. Almost all expired land leases have been left idle by native landowners. The Agriculture ministry is trying to encourage cropping on these lands by giving assistance in terms of planting materials and forming farming groups where they will be rented machines to cultivate the land. Furthermore, young people nowadays flock to join white collar jobs. Even those that don't get good academic results dont want to endeavour in agriculture, they prefer to be box boys at supermarkets and live in the city surburbs (squatters). All in all, they is no single area where the problem lies and we all have to play a role in this.
5
praveen kumar k v

How has the GDP decreased to 8.9
Their is a need of assistance by the government
8
naveen

I think the government should provide secured land to farmers where they can practcise farming. Reduce duty on importation of machinery, fertilizers, chemical, seeds, and all other farming related materials. its not the time to ague with each other but rather work hand in hand to over come this crisis.
9
sosi

the infromation is useful... is there any chance if there is an article on the importance of agriculture and its development status in the country..??
10
jasmita

I would like to know the contributions by the ginger industry towards economic development in Fiji. Some problems faced by the industry, also what could be done to improve the industry.
11
Jotika

The information is very useful the one who is doing their projects..,it has most of the information.
16
sailosi

what are other agricultural products that are exported from fiji.
17
Fereti Atumurirava

thanks for the information
it has helped us fnu studentrs to gather bits of information from this artical.