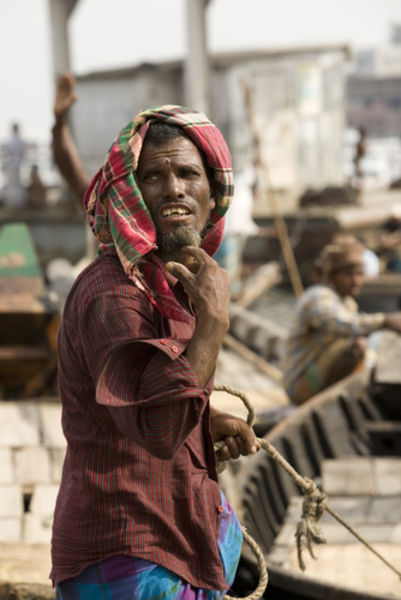 Due to rapid growth of the population in the last few decades the Bangladeshi labor force has grown rapidly, as there was a large proportion of young people born in the 1960s and 1970s. According to the EIU Country Profile the Bangladeshi labor force almost doubled in a matter of a decade, growing from 30.9 million people in 1985-86 to 56.0 million people in 1995-96. Although all sectors of the national economy experienced significant growth, they were far below the speed of the labor force growth. According to Bangladeshi national statistics, in 1995-96 only 12.4 percent of the labor force had formal employment, while 40 percent were considered "employed in family-based" businesses, 29.6 percent were considered "self-employed," and 17.9 percent had their jobs on a "daily basis." In general, the competition for working positions in the country is intense, and the working conditions are very harsh, especially in rural areas, where 63 percent of the labor force are employed.

The Bangladeshi government pays special attention to improving education at all levels, as it wants to attract labor-intensive manufacturing and services to the country. Primary education is compulsory. Various initiatives have been tried, including direct special stipends, designed to increase the proportion of female students at school. However, as the government admits, the country's education system suffers from poor quality education, chronic shortages of trained teachers, and a shortage of books. Secondary education is not accessible for

children from many poor families. The government channels considerable funds into tertiary education, and the quality of teaching in some areas, particularly in technical subjects, is relatively strong. Nevertheless, the overall quality of the Bangladeshi universities' graduates often does not match the demands of modern technological developments in many areas, including information technologies and engineering. A number of Bangladeshis, receive their education overseas, many with state or international organizations' support, although in the past many of the students have opted not to return home after graduating from overseas universities. Bangladesh suffers shortages of medical doctors, information technology specialists, qualified teachers, and professionals in various other areas.

The very low wages, starting from Tk1,500, and harsh working conditions drive large numbers of people to seek jobs as temporary workers in Kuwait, Malaysia, Qatar, Saudi Arabia, Oman, and the United Arab Emi-rates. According to some unofficial estimates there are as many as 20 million Bangladeshi illegal immigrants in neighboring India. Many are hired to work in the low-skill and low-wages construction and service sectors and on agricultural plantations. The workers' remittances, sent home regularly, are one of the most important sources of hard currency not only for the extended families of these workers, but also for the national economy as well, totaling, according to the IMF's figures, US$1.706 billion (1998-99) or equivalent to the Bang-ladeshi gross official currency reserves in 1998-99.

The trade unions are very strong in Bangladesh, although only 3.5 percent of the workforce is unionized, but most of the unions are limited to the public sector or state-controlled enterprises. According to the International Confederation of Free Trade Unions (ICFTU), there are a total of 23 national trade union centers in Bangladesh and approximately 5,450 trade unions. The largest of these are the Bangladesh Jatio Sramik League (BJSL); the Bangladesh Jatiyatabadi Sramik Dal (BJSD); the Jatiya Sramik Party (JSP); the Bangladesh Free Trade Union Congress (BFTUC); and the Jatio Sramik League (JSL). These bodies are organized together in the ICFTU Bangladesh Council. About 1.8 million of the country's workers belong to unions, out of a total workforce of approximately 58 million. The unions tend to have strong links to major political parties or are controlled by political figures, and they often lead political action and strikes in the country. The power of the trade unions is exemplified in the fact that their continuous general strikes (hartals) forced the BNP government to resign in 1996, and their support led to the victory of the Awami League in the 1996 parliamentary election. Strikes are extremely common in Bangladesh and can paralyze business activities for weeks. The private sector is less unionized and trade unions are practically banned from the Export Processing Zones (EPZ), as the EPZ is exempted from certain labor laws. In case of industrial dispute the problems are supposed to be solved through the Labor Tribunal.

Unlike many Middle Eastern countries, women in Bangladesh enjoy considerable freedom and are generally involved in education and labor, although the employment and literacy rates among them generally are lower than among men. Recent surges in the garment industry brought new employment opportunities for women, as around 95 percent of people employed in this sector are women. However, in the rural areas the women very often are disadvantaged and among the poorer members of the communities. Currently, more than 37 percent of the labor force is women. However, unionization among women, and hence the protection of their rights, is generally lower than among men.

Despite the presence of strong trade unions, the use of child labor was quite common until recently. Not until 1995 did the Bangladeshi garment exporters' association agree to eliminate children from the industry. However, according to the International Confederation of Free Trade Unions, included in export sectors such as garments and leather production, there are over 6 million child laborers between the ages of 5 and 14 years who work for pay and are not enrolled in school. About 1.9 million working children are below the age of 10. In addition to remunerated employment, children often have to work alongside other family members in small-scale and subsistence agriculture. Bangladesh has not ratified either of the ILO core conventions on child labor, although there are various laws and regulations protecting children.