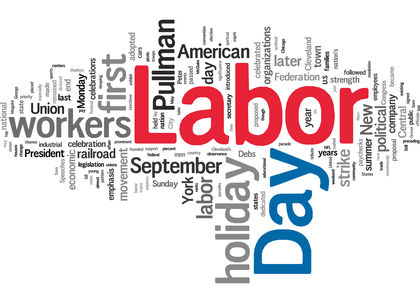 One long-term problem for the American workforce is the greying of the population. As more workers age and then retire, the financial burdens for the remaining workers will increase. In 1950, there were 12 workers for

every 1 retiree, but currently there are only 3 and this ratio will continue to shrink. This means workers will have to pay higher taxes to support programs such as social security and Medicare (the government-funded health-care program for the elderly). At current projections, social security is predicted to go bankrupt in 2038 while Medicare will run out of money in 2035.

American workers have various legal protections that allow them to organize and join unions. However, the United States has one of the lowest rates of unionization among the major industrialized nations. Of those Americans who belong to unions, almost 75 percent are affiliated in some form with the American Federation of Labor-Congress of Industrial Organizations (AFL-CIO). The major trend in organized labor in the United States has been the continuing decline in union membership. During the 1950s, about 40 percent of American workers belonged to unions, but by 1981, that proportion had fallen to 20.1 percent. In 2000, only 13.5 percent of American workers (16.3 million people) belonged to a union. However, there are widespread regional differences. Union membership is greatest in the Northeast and the industrial states of the Midwest. New York, New Jersey, and Michigan had union membership rates of more than 20 percent. On the other hand, all Southern states had union membership below 15 percent and 2 states, North Carolina and South Carolina, had rates below 5 percent. Among the different sectors of the economy, government employees at the local, state, and national level had the highest union rates (on average 37 percent). Unionization was lowest in the sales sector (3.5 percent).

Working conditions are governed by both state and federal law. There are national provisions against child labor, but states are free to enact supplemental legislation. For instance, many states set the minimum age for employment at 16, while others allow children as young as 14 to be employed with parental consent and impose other restrictions on the amount of hours worked. There are also both national and state laws that govern the number of breaks employees are entitled to and issues of worker safety. Enforcement of labor laws is the province of a variety of state and federal agencies. On the federal level, the Department of Labor, the Equal Employment Opportunity Commission of the Justice Department, and the Occupational Health and Safety Administration (OSHA) are the primary agencies which enforce labor and safety laws. Most state governments have similar agencies that mirror the federal organizations.

In 2001, the national minimum wage was $5.15 per hour, but many states have minimum wages that exceed that amount. The standard workweek is 40 hours, although many salaried positions (held by workers who are paid weekly or monthly, not by the hour) entail standard work-weeks in excess of 40 hours. For hourly employees who work more than 40 hours, overtime pay equal to one and one-half times regular salary is standard. In addition to a number of national holidays, most American workers receive 2 weeks vacation per year and 2 weeks sick leave.

As with many other aspects of the economy, there are wide gaps in income depending on race, gender, and geography. Income levels for whites tend to be higher than minority groups, and average salaries for women are only about 75 percent of the pay of their male counterparts. Discrimination also continues to exist in hiring and promotion practices, so that many women and minorities have difficulty in obtaining jobs and promotions. There are also great regional differences in pay and cost of living, with the Northeast having the highest income levels and cost of living, while areas of the South have the lowest rates.

When compared with Europe's industrialized nations, American workers tend to be paid less and have to work longer hours. They also have less vacation time. Despite this, American workers are among the most productive in the world and produce more goods or services per hour than most of their European counterparts. On the other hand, Americans have significantly lower taxes and the cost of living in many regions of the nation is far lower than in other industrialized nations. As a result, the level of disposable income of the average American worker is among the highest in the world. One result of these factors has been continued immigration to the United States as people seek economic opportunity.