Trinidad and Tobago - Poverty and wealth 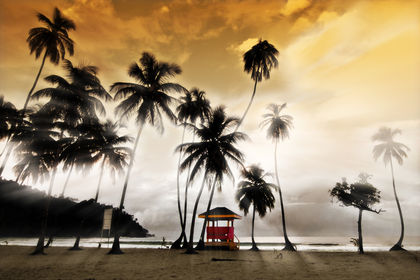 Distribution of wealth has always been uneven in Trinidad and Tobago. Although there is a large middle class, there are also extremes of wealth and poverty. The wealthy minority is made up of those with interests in private-sector manufacturing and, it is widely rumored, with good contacts in politics and the state corporations. There is a small elite descended from the traditional plantation owners, often light-skinned and educated abroad, but there is also a larger group of entrepreneurs, many of whom owe their fortunes to the boom years of the 1970s when land prices rocketed and money flowed freely. Another wealthy group is comprised of business people of

East Indian origin who have set up lucrative operations in the retail and import-export sectors. The richest citizens of Trinidad are to be seen in the hillside suburbs of Port of Spain, where large villas boast satellite dishes and swimming pools. Trinidad and Tobago's rich tend to live a transnational lifestyle, with assets and interests in the United States. Shopping trips to Miami or Caracas are commonplace, and some upper-class families prefer to send their children abroad for education rather than to the local University of the West Indies.

The other extreme is to be found in deprived inner-city ghettos such as Laventille, where the poorest members of society live. It is here, in areas of ramshackle shacks and self-built cinder-block houses, that the worst problems of poverty, unemployment, and crime grow unabated. Unemployment is worst among the 15-19 age group, of whom an estimated 43 percent are out of work. This has contributed to an alarming rise in violent crime, much of it connected with drugs and gang warfare. The other areas of greatest deprivation are small villages, often inhabited by agricultural laborers of Indian descent, around the central sugar belt.

Trinidadian society is not hugely stratified on color lines, although there is often considerable tension between the African-and Indian-descended sectors of the community. Social mobility is possible, but there is often little opportunity for poor families to improve their economic outlook other than through migration.

Despite areas of poverty, health care and education are generally of a high standard in Trinidad and Tobago, especially in the urban areas. Primary education is free and compulsory, and there is a high level of literacy, estimated by the Pan-American Health Organization at 95 percent. Secondary school enrollment, beginning at 12, is also free, but only 69 percent of eligible children were enrolled in 1999. Social security is extremely basic, and much of the care of the old and sick is entrusted to family networks or charitable agencies.

hi, i am doing an Internal Assessment for CAPE's Communication Studies and the topic that in am doing is Poverty in Trinidad. I just wanted to know if you can specify the areas that have the highest poverty level?
2
makeba

IT IS NOT LAVANTILLE THAT IS UNDER POVERTY IN TRNIDAD. THERE ARE ALOT MORE PLACES.
3
william

want this information for clas project on poerty in the Caribbean
4
G.A MARQUES

Lventille is still classed as the worse area of Trinidad for poverty ,murders and genral crime. The inhabitants have a high amount ofthe uneducated in their coomunity.
It has been a stronghold of the PNM fordecades,who over the years relied on the solid support of the community, but has failed to help these people from their deprived state of existence.
It is sometimes reffer to as a no go area.
The area is in dire need of enviromental upgrade,better housing and employment,bettereducational facilities and compassiom.
These people are at the mercy of the highly educated uncaring politicians ,the rich and the masterminds of crime. They need urgent long term financial and welfare help.
5
onlyatrip

What this doesn't to say is most of the poor are black men and woman. That crime is on the rise because the poor do not use educational resources, they can't afford gas and food!
6
Alia

Can you name the lingustic groups in Trinidad and Tobago...and can you tell about the discrimination being faced by these groups
7
YVONNE ABRAHAM

how can I determine if someone is impoverished. Is there an indicator, formula or website that can be used.