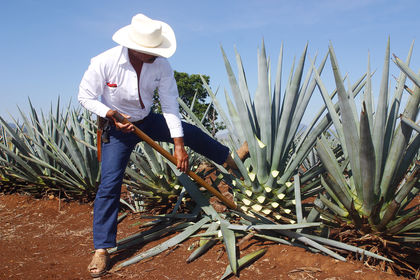 The conditions under which someone works in Mexico depend on whether or not that person is a member of the formal labor force or is employed in the informal sector . Formal workers are those who have registered with the Mexican Institute for Social Security as workers. They and their employers make payments into a fund that pays for—among other things—health care. These workers also receive the protection of the country's minimum wage and labor laws. In 1999, the formal labor force was 41.41 million workers with an unemployment rate of 2.5 percent, down from 6.5 percent in 1995. Individuals working less than 35 hours per week (the underemployed ) totaled 19.1 percent of the labor force. Informal workers, estimated at up to 40 percent of the labor force, are un-registered workers, and include Mexico's hundreds of thousands of street vendors. These individuals are not entitled to the benefits received by formal workers.

The minimum wage in Mexico is set annually by a commission that has representatives from government, business, and labor. The commission seeks to increase the minimum wage by an amount that will account for the next year's anticipated inflation. There are 3 different minimum wages corresponding to different geographic areas. The highest wage is in Mexico City (NM$40.35 a day or approximately US$4.25 per day). Unfortunately, the country's inflation has on average been higher than the increase in the minimum wage. For example, at the beginning of 1995, the commission increased the minimum wage by 21 percent. However, the currency crisis in that year caused inflation to increase by more than 50 percent. So it is that in 1987, the minimum wage covered 94 percent of a worker's basic necessities. By 1995, it covered only 35 percent of those necessities. The reality is even worse because estimates of noncompliance with the minimum wage law vary from 30 to 80 percent of employers, depending on the location of the business. In view of this economic reality, one of the important developments in Mexico's labor force has been the number of women who have joined the labor force in the past 20 years. Married women in particular have joined the labor force because of the erosion of the real wages of their husbands. Unfortunately, the wages of women have lagged far behind those of men.

The economic woes that confront Mexican workers stand in sharp relief to the progressive labor laws and infrastructure that are available for their protection. For example, Mexican labor laws guarantee workers such things as 1 day off each week, and 8 days of vacation per year. The minimum age for work is 14 years of age, and child labor laws prohibit children from working certain jobs and certain hours. Labor unions are the most visible component of Mexico's labor infrastructure. Although there are only a few professionals who are organized, it has been estimated that over 90 percent of industrial workers are part of a union if they work for a business with at least 25 employees. The country's unions are organized at the local, regional, state, and national level. The national labor organization is called the Congress of Labor and fully 85 percent of unionized workers belong to it. The unions do provide a voice for the workers in Mexican society although some question their effectiveness. Indeed, the realities of the Mexican economy over the past 20 years has forced the unions to make major wage concessions. Privatization has resulted in the elimination of thousands of union jobs. One can imagine, however, that the situation for Mexican workers would have been far worse but for the presence of Mexico's labor unions.

I would like to ask about the wages in the restaurant services
as per day or hour.
2
bri