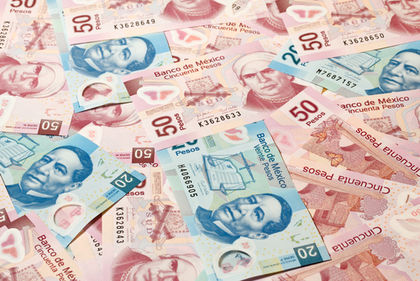 For approximately 30 years (from the 1940s to the 1970s), Mexico had an average annual growth rate of 6 percent, inflation of less than 10 percent, and very little debt to the outside world. However, over the next 30 years (1970s to the present) there were 2 economic crises

that brought the economy to the brink of collapse (in 1982 and 1995). During these crises, the economy experienced significant inflation (159 percent in 1987), unemployment, and a recession of 7 percent in 1995 (the largest since the Great Depression of the 1930s). Mexico's troubles stem from 2 successive administrations (Presidents Echeverría in 1970 and Lopez Portillo in 1976) which pursued political and expansionist policies that exceeded the limitations of the Mexican economy. These policies left the economy in shambles with a large external debt and a number of poorly functioning, corrupt, and inefficient government agencies. The administrations that have come to power since 1982 have labored mightily to undo the damage that was done to the Mexican economy from 1970 to 1982. It is useful to consider briefly the strategy pursued by each administration since 1982.

In 1982, President de la Madrid inherited a government with a deficit equal to 18 percent of GDP and government spending that was 47 percent of GDP. Immediately, his administration faced an upcoming foreign debt payment of US$10 billion for which it had no funds. Indeed, high oil prices in the 1970s had given prior administrations the illusion of continued government revenues, but these dissipated in the early 1980s when oil prices collapsed. In 1982, the incoming de la Madrid administration declared the situation an emergency and instituted measures that included an increase in taxes and interest rates, and a cut of the federal budget. The U.S. government intervened with a US$1 billion loan guarantee and by pressuring banks to postpone their receipt of the US$10 billion debt repayment. The Mexican government also restructured its foreign debt with the International Monetary Fund so that it paid a lower interest rate on its debt over a longer period of time. The peso was also devalued by the government a number of times. These early efforts by the de la Madrid administration did not bear fruit. For example, the Mexican economy contracted by 5 percent in 1983, grew by 3.5 percent in 1984, but contracted again by 1 percent in 1985.

However, 3 events occurred in the mid-1980s that ultimately yielded positive results for the Mexican economy. First, the de la Madrid administration made a deliberate decision in 1985 to promote Mexican exports and liberalize trade. The success of that policy in increasing Mexico's exports has been previously discussed in the section on international trade. Second, the Baker Plan (named after U.S. Treasury Secretary James A. Baker), implemented in 1986, allowed Mexico to reschedule US$43.3 billion of its US$52.2 billion foreign debt. It also provided the Mexican government with US$12.5 billion in new credit. The final event was the Economic Solidarity Pact that the government entered into with the various sectors of the economy (including business and labor) in 1987 wherein all agreed to try to limit wage and price increases. The government for its part agreed to such things as a cut in spending and a more restrictive monetary policy . All 3 of these events yielded results and by 1988, Mexico's inflation rate was 52 percent, down from a high of 159 percent in 1987.

In 1988, the Salinas administration continued many of the policies of the de la Madrid administration. Companies were privatized; as of 1993, 390 (63 percent) of the companies that had been held by the government in 1988 had been sold. Tax collection improved and in 1995 the government ran a surplus of 815 million pesos. Inflation was controlled initially and by 1994, the rate of inflation was 7 percent. However, in its pursuit of trade liberalization, the government mismanaged its currency. Current account deficits (imports greater than exports) progressed to a point where the government was without international reserves to pay for imports. In December of 1994, the incoming government of President Zedillo was forced to devalue the peso. Inflation and unemployment resulted. The economy contracted by 6.2 percent in 1995. However, the Mexican government was able to borrow or obtain credit guarantees of US$48 billion in 1995.

The Mexican economy has recovered quickly since 1995 through the pursuit of traditional economic policies. The Zedillo administration cut government spending and increased taxes. Accordingly, the rate of inflation went from 52 percent in 1995 to 27.7 percent in 1996. Privatization efforts will continue with the Fox administration that came into power in December of 2000. The growth numbers for the Mexican economy have looked impressive since 1996 with GDP growth in that year of 5.2 percent, 6.8 percent in 1997, 4.8 percent in 1998, and 3.7 percent in 1999. Inflation has also been controlled, with inflation in 2000 at 8.96 percent, the lowest annual inflation rate since 1994. Unemployment in October of 2000 fell to an all-time low of 1.97 percent. It is curious that the 19 year-old Mexican Stock Exchange (Bolsa Mexicana de Valores) did not respond to all of this good economic news in 2000. The Bolsa's stock index finished the year with a loss of 20.7 percent at 5,652 points. One possible explanation for this is that stock exchanges throughout the world tend to move in tandem and that

the Bolsa lost value as did other stock exchanges throughout the world in 2000. It is worth noting, however, that the Bolsa continues to be one of the fastest growing stock exchanges in the world. Its index was valued at 1,500 points in 1995 after the peso crisis. Its close at 5,652 points in 2000 implies a 55 percent annual growth rate from 1995 to 2000. There are hundreds of Mexican companies presently traded on the exchange.

Thank you for this article. It really helped me with my school project. Keep up the good work!