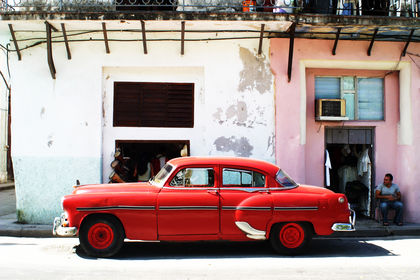 By some measures, Cuba is the most socially egalitarian of the world's nations. Apart from some governmental and military officials, the highest salaries in the country are only 4 times the amount of the lowest salaries. This situation is changing rapidly toward greater inequality; although definitive statistics are not available, there is a great discrepancy between the earning capacity of those in contact with dollars and those without. When Fidel Castro's socialist government came into power, it inherited a social situation similar to most other Latin American countries. There was a small but very wealthy class of landowners and government officials, and large numbers of impoverished peasants in the countryside and poorly-paid urban workers. Havana, on the western end of the island was a wealthy, developed urban center while most of the island was undeveloped, rural, and poor. Most Cubans were uneducated (3 out of 4 were illiterate), and modern health care was not available to them. Castro focused his policies on destroying the middle and upper classes and eliminating the abject poverty of the lowest classes. In some ways he was successful. He confiscated the large landholdings and companies of the very wealthy, causing much of the upper class to flee the country. In nationalizing most of the

businesses in Cuba he placed the state in control of the economy, thus allowing it to control wages for all positions. A wage scale was established that had only 4 levels from top to bottom. In 1960, rent prices were established at 10 percent of one's salary. State funds were diverted away from Havana and funneled into the countryside. The state provided or subsidized food, medical care, funerals, transportation, vacations, and other consumer goods.

During the period from 1959 to 1989, the state was also relying heavily on assistance from the Soviet Union (see Overview of Economy). When the Soviet Union was no longer able to help, the recession of the early 1990s forced Cuba to change its policies. It loosened control of the markets, allowed people to own their own businesses, allowed foreign ownership within Cuba, encouraged tourism, created a tax system, and legalized U.S. currency. Income inequality has resulted; those who are on a fixed income from the Cuban state are earning far less than those who have contact with U.S. dollars. For example, a doctor might earn 40 dollars a month, while a taxi driver might receive 40 dollars a week in tips.

The Cuban state still provides free education from primary school through the university level, an ironic situation given the difficulties of finding employment after graduation. If a job is available, it will pay less than a job as a waiter or taxi driver. Medical care is also free, and Cuban hospitals do remarkable work considering the available resources; however, people often die from curable diseases simply because the medicines required are unavailable.

While traditionally the rural poor have struggled more than the urban poor, it was easier for the rural poor to maintain a healthy diet during the economic difficulties of the 1990s because of their proximity to farms and their ability to plant small plots of land with fruits and vegetables.

Housing has been a particularly difficult situation in Havana under the Castro government. In the 1990s, the housing deficit grew by 20 percent per year. Out of 2.6 million units of housing in Havana, almost 1 million are in a substandard condition. Most buildings in the city have not been properly maintained since 1959, and little new construction has taken place.

what is cuba doing to eradicate poverty from the nation?