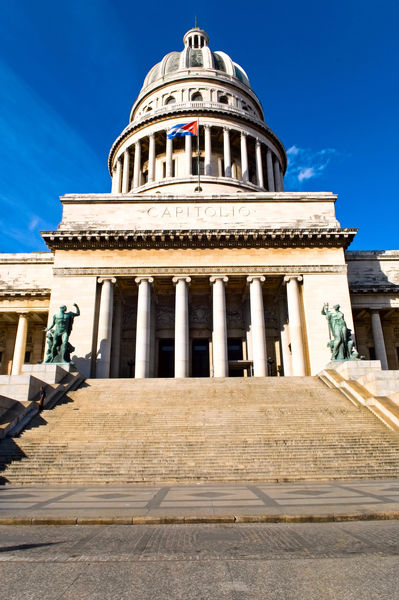 According to the Cuban constitution, Cuba is an independent socialist republic that is controlled by 1 party: the Cuban Communist Party (PCC), of which Fidel Castro is the head, with his brother, Raul Castro as vice-president. The Communist Party is led by a group of 25 individuals chosen by its head. Molded by this elite group of communists are organizations that encompass every facet of society, including youth, women, workers, and small farmers, among others. Around 80 percent of the population has membership in at least one of these organizations. This network ensures that the agenda of the Communist Party is disseminated (communicated) to the masses.

The National Assembly is the legislative body of the Cuban government. The Assembly is composed of 601 members whose terms last 5 years. For these positions, the Council of State nominates candidates, who are then subject to a direct vote by the Cuban people. The National Assembly also elects the Judicial Branch. On the local level, members of Municipal Assemblies are chosen by direct local election. Local government is closely over-seen by the Communist Party. As is evidenced by Fidel Castro's almost complete control over decision-making, most policies are the direct result of his personal desires.

The Cuban governmental structure is heavily bureaucratic (organized into many agencies). Until 1993, the Central Planning Board (JUCEPLAN, or Junta de Planificación Central), was responsible for economic planning. After 1993, in a move to create greater efficiency and to decentralize, different sectors of the economy became the responsibility of various ministerial bodies, including the Ministry of Tourism, the Ministry of Science, Technology, and the Environment, the Ministry of Industry, the Ministry of Sugar Planning, and the Ministry of Foreign Investment and Economic Cooperation, among others.

The economy is largely state-controlled, with 75 percent of the labor force employed by the government. Therefore decisions that are made within each of these state-run ministries have a great impact on the economy and on the individual. The Cuban people have very little influence over government policies, most of which are directly handed down from the upper echelons of government. Over the years, Fidel Castro has proved himself somewhat whimsical in his approach to long-term economic planning. Many economic policies are the direct result of his attempts to maintain his tight control on the Cuban population through economic means.

Interestingly, the military has been on the cutting edge of the restructuring of Cuba's economy. Since the 1980s, the government has been unable to support the armed forces, forcing the Ministry of the Armed Forces (MINFAR) to become almost completely self-supporting. MINFAR started a tourist company, a construction company, and an agricultural project to grow its own food. The CIA estimated that military expenditures constituted only 4 percent of the gross domestic product (GDP) by 1995.

Taxes do not constitute a large part of the govern-ment's revenues. Taxes were first introduced in 1994 as a method of controlling earnings from the burgeoning small-business sector. It was based on a flat-tax system with rates fixed at different levels for different businesses. By 2001, a more formalized system of income taxation was in the planning stages, one that might provide a large share of federal revenues in the future.

when is the next election just curios? also i love your artical it helped me a lot
2
calvin

Who is the author of this information and when is the date of publication?