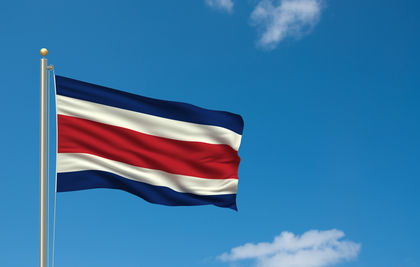 San José, the capital, is located in a highland valley in central Costa Rica called the Meseta Central. Most of the country's population is located in this area formed by 2 basins separated by low, volcanic hills ranging from 900 to 1,500 meters above sea level. Other important cities are Cartago (the old colonial capital), Alajuela, and Heredia. The main port cities are Limón on the Caribbean Sea and Puntarenas on the Pacific.

Adding to the high birth rate, the Costa Rican population also increases due to immigration —particularly from Nicaragua and other Central American countries. Immigrants come to Costa Rica in search of work opportunities, which they usually find in the agricultural sector. They are attracted by the relatively higher standards of living that are enjoyed in the country. The immigration rate for 2000 was estimated at 0.54 immigrants per 1,000 citizens.

The population of Costa Rica is mainly white (94 percent, including mixed European and Amerindian mestizos) and Roman Catholic (85 percent). There is a small proportion of black (3 percent), Amerindian (1 percent), and Chinese (1 percent) residents, and the second most important religious group is Evangelical Protestant (14 percent).

Gold is mined on the southern Pacific Coast and northwestern regions of the country. Some controversy exists as to the ecological impact of the methods employed in these extractions. Silver is also mined— though not extensively—in the western part of the country. Deposits of manganese, nickel, mercury, and sulfur exist but remain unexplored. Petroleum deposits have been identified in the southeastern region, but their exploitation has been deemed uneconomical. Salt is produced from seawater.

According to the Ministry of Commerce and Industry, 24 percent of all industrial establishments process foods, drinks, and tobacco; 21 percent are metal and mechanic shops; 15 percent process wood, furniture, or other wooden products; 14 percent produce textile or leather products; 9 percent are in paper and printing; and 8 percent are in chemicals, rubber, and plastics.

The most dynamic portion of the service sector is tourism. Costa Rica pioneered ecotourism (the practice of touring natural habitats in a manner that minimizes ecological impact). Because of its great biodiversity the country enjoys a natural advantage in this sort of activity. The number of tourists visiting Costa Rica has increased steadily during the 1990s, at an average rate of 15 percent per year. During 1999 over 1 million people visited the country, and the Costa Rican tourist board estimates that number increased by over 10 percent in 2000. Since 1986 a flow of investment exceeding US$800 million has been devoted to developing the sector. In 2001 there were over 13,400 rooms available for tourists. In 1998 US$883 million was generated by the tourist industry. This amount was over twice the revenue generated by coffee and 1.3 times that of banana exports. The government promotes the development of tourism through the Instituto Costarricense de Turismo (ICT), or tourist board, which prepares a yearly development plan. ICT runs specialized educational facilities to train workers in hotel management and other tourism-related activities.

Retailers currently employ about 20 percent of the active workforce. Most retail firms are small to medium companies, although large discount retailers and hypermarkets have established themselves in the market during the past 2 years. There are 4 main supermarket chains—Automercados, MasxMenos, Super2000, and Perifericos—as well as a number of one-location markets of considerable size. Coverage of retail stores is limited to the Central Valley, although some have made inroads into the provinces during recent years. The oldest and largest department stores are La Gloria, with significant coverage in the Central Valley, and Llobet, located mainly in Alajuela.

About 5 percent of the workforce is employed in financial services. The sector generates about 3.6 percent of GDP. Banking was a state monopoly until 1987, when private institutions were allowed to coexist legally with the state banks, although they were limited to offering time deposits and were not allowed to offer checking or savings deposits. Reforms in the 1990s allowed private banks to offer the entire range of financial services, virtually eliminating the previous state monopoly. The only difference that persists between private and public banks is that the latter enjoy unlimited deposit guarantee from the state whereas private deposits are un-secured. There are 3 public banks—Banco Nacional, Banco de Costa Rica, and Banco Crédito Agrícola de Cartago—which represent 41 percent of total credit, and 20 private banks which represent 35 percent of total credit (2000). Other financial institutions include a workers' bank known as the Banco Popular y de Desarrollo Comunal which is capitalized through mandatory payroll contributions from workers and employers, a public funding agency for mortgage financing known as the Banco Hipotecario de la Vivienda, savings and loan cooperatives, mutual fund companies, and finance companies. The social security fund also engages in long-term mortgage financing. Insurance is presently a state monopoly; all insurance business is handled by the Instituto Nacional de Seguros.

There is a private stock exchange, the Bolsa Nacional de Valores (BNV), which is the oldest and largest in Central America. Its current annual volume is approximately US$28 billion, but over 80 percent of the volume traded is in public instruments. Only a small fraction of this volume (under 1 percent) is in equities . Some international transactions are also handled through the exchange. There are 27 brokerage companies currently participating at the exchange.

A burgeoning sector in Costa Rican services is the production of computer software. The National Chamber of Software Producers estimates the country currently boasts the highest number of per capita software producers in the world. About 85 percent of these firms, all nationally owned, export their products with yearly revenues of over US$50 million. The sector is estimated to have generated over 1,500 jobs in 1998. The high level of education and technical expertise available in the population favors the development of this industry, which is expected to continue growing.

Costa Rica has no territories or colonies.