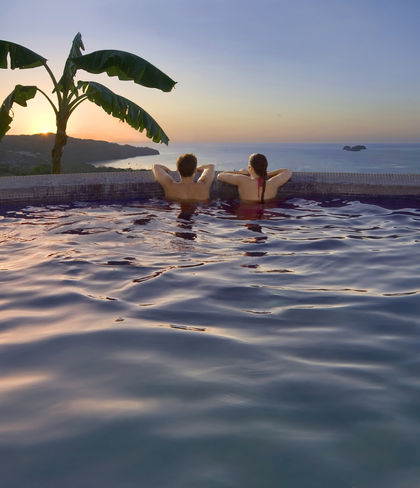 Costa Rica has a large, professional middle class, and a relatively equal distribution of wealth. For the years between 1987 and 1998, the poorest 20 percent of the population held 4 percent of total income, whereas the richest 20 percent held 52 percent of total income. Approximately 9.6 percent of the population was reported under the World Bank poverty line (PPP US$1 a day) in 1998, compared to an average of 15.6 percent for Latin America and the Caribbean. The country had a per capita income (at purchasing power parity ) of US$7,100 in 1999.

The Economic Commission for Latin America and the Caribbean classifies countries according to the incidence of inequality as measured by 5 risk factors: urban income inequality, urban poverty, urban unemployment, percentage of youngsters between 13 and 17 that are out of school, and the percentage of children that have not completed 6 years of schooling by age 15. Costa Rica is classified as having a low incidence of income inequality, measured as a ratio no greater than 8 between the richest 10 percent and the poorest 40 percent. It is also considered to have low incidence of poverty, measured

Costa Rica has also been classified by the United Nations Development Program as a country with medium human development in the 2000 report. The Human Development Index (HDI) is a composite index that measures different aspects of development, such as life expectancy at birth, education, and income. Costa Rica was ranked 47th in the world according to the HDI report 2000.

The Costa Rican government provides a comprehensive safety net through its social security system. Although coverage is far from universal and the system is plagued by high rates of evasion, payroll taxes insure a majority of the working population and their families. There is no unemployment insurance, but the law requires employers to pay up to 8 months of severance to dismissed employees. A legal reform passed in 2000 requires employers to pay monthly contributions into pension and severance funds that will be at the disposal of employees when required. Education is mandatory and free at the primary and secondary levels, and public universities provide high quality, low cost education at the undergraduate and graduate level. High quality medical attention is available and open to all citizens in the national hospitals.

Despite these achievements certain tendencies have started to erode the benefits of social services, creating a growing gap between the higher and lower sectors of the population. The quality of private education, for example, has surpassed that of public education. Service at public clinics and hospitals is poor, and there are long waits for medical appointments and procedures that tend to exclude those most in need. Public pensions are low and lag behind inflation. Reform efforts are underway that will attack these situations, but until they are passed, governmental authorities will continue to be challenged by these problems. Although government spending in these areas has not been reduced, critics believe that even higher amounts are required. The reforms partly hinge on this matter, but also aim at increasing the efficiency and effectiveness of administrators.

Everything was great,but what I want to know is,what is the percent of the poverty of Costa Rica?
2
tabitha whorica

thank you guys i found everything quite enlightening, but really guys, i was just trying to cure the sore throat and fever as well as vomiting and reading all this information did nothing but at least i now know that costa rica is a real place and not just made up or an urban legend :')
3
Harunur Rashid

Need one page where we can get a brief details of Costa Rica.