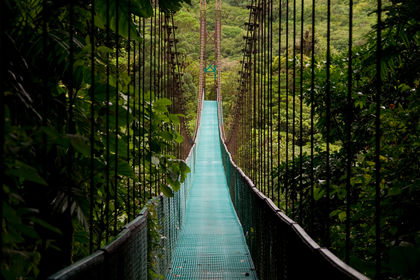 Costa Rica's temperate (warm) climate and fertile soils are suitable to agricultural production. There is an abundance of water—yearly rainfall averages 4 meters— and irrigation has been successfully applied to develop more arid (dry) regions. The government supports growers through research, training, and technical assistance.

Coffee is the country's oldest agricultural product and has been exported since the 1790s. In the 1820s the Costa Rican government stimulated its production by distributing free coffee plants and offering tax exemptions to interested families. This approach resulted in a group of small producers that, in spite of the existence of large-scale growers, has managed to remain in existence. Costa Rican coffee has been characterized by its high quality and efficient production, boasting some of the highest area yields in the world. In 1999 the country produced 147,000 metric tons of coffee. Although for many years coffee was the country's main source of foreign exchange, low international prices eroded its importance. Production for 1994-99 averaged 2.9 million bags (133,000 metric tons) with revenues of US$370 million annually. While such revenue represented about 11 percent of total export earnings in 1994, it only amounted to 4 percent of total export earnings in 2000.

Banana production surpassed coffee as the main agricultural product in 1992. Local farmers have cultivated it for over a century on the country's coasts, although primarily multinational corporations handle its export and sale. Production grew constantly during the 1990s, and prices remained steady. Exports for 1994-99 averaged 2,045,000 metric tons with revenues of US$624 million. This represented almost twice the revenue generated by coffee. Costa Rica devotes 50,000 hectares to growing bananas, almost 1 percent of its territory. It is the second largest producer in the world with an annual crop of approximately 115 million boxes sold in the United States and Europe. Growers estimate that their industry generates over 40,000 direct jobs and 100,000 indirect jobs. Workers in banana production enjoy the highest salaries and benefits in the Costa Rican agricultural sector.

Costa Rica is also an important producer of sugar. Yearly export volumes average 130,000 metric tons per year, with revenues of US$39 million. However, unlike coffee or bananas, sugar production is largely for local consumption, which exceeds 2.6 million metric tons. Over 48,000 hectares of land are dedicated to the production of sugar.

Nontraditional agricultural goods have been rising in importance over recent years. Most of them are export oriented and linked to various forms of agroindustry. Examples are African palm used for the extraction of vegetable cooking oil, and oranges processed for their juice and exported as fluid or concentrate. Although African palm has been cultivated since the 1970s, its period of strong growth began in the 1990s. By 1996 over 27,000 hectares were in production generating a volume of 422,000 metric tons. Orange production began in earnest as recently as 1990, spurred by the construction of 2 processing plants. Production areas doubled in 6 years, reaching 23,500 hectares and 165,000 metric tons. Other important nontraditional agricultural products are hearts of palm, ornamental plants, and macadamia nuts.

this was an easy to read article and has lots of information.
2
Bob

Is there any cigar tobacco farms? If so what part of the country are they located?
3
Boll

Thank you a lot it was really helpful so thanks for making the article.
4
juan ayra

Fruit Annon, is it easy to acquire?
I like the article and will like to know, if Costa Rica produce this tropical fruit