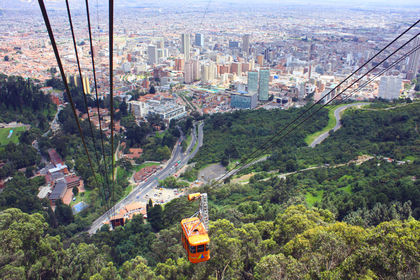 Shaped like an odd-looking pear with a thin top, Colombia is located in the northwestern corner of South America, alongside the Caribbean Sea between Panama and Venezuela, and bordering the Pacific Ocean between Panama and Ecuador. Colombia has an area of 1,138,903 square kilometers (439,733 square miles) and a total coastline of 3,207 kilometers (1,993 miles) distributed between the Caribbean Sea and North Pacific Ocean. It shares borders with Venezuela to the east, Brazil to the southeast, Peru and Ecuador to the south-southwest, and Panama to the northwest. With the fifth-largest area in Latin America in terms of size, Colombia is one-ninth the size of the United States, and is approximately the same size as the United Kingdom, France, and Germany combined. The capital city, Bogotá, is located in the center of the country in a mountainous setting.

Topographically, Colombia is divided into 4 regions: the central highlands, the Caribbean lowlands, the Pacific lowlands, and Eastern Colombia (east of the Andes mountains). In this diverse geography one important feature is the 3 chains of high mountains (cordilleras) that cut the country from south to northeast.

At the end of World War II, Colombia's population growth accelerated dramatically, peaking at about 3.2 percent per year by the 1960s. In 1951 Colombia's population was 11.5 million, and by 1973 it had doubled to 22.9 million. Beginning in the late 1960s the annual population growth rate dropped dramatically, such that between 1973 and 1985 it stood at only 2 percent. This drop was partly the result of a control policy initiated during the Lleras Restrepo administration (1966-70). Colombia was one of the few Latin American countries to adopt family planning as an official policy and to integrate it into development plans.

Visitors travelling to Colombia during the 1950s and 1960s were struck by the social and economic changes in the country. The population explosion was accompanied by significant migrations from the countryside to intermediate and big cities, which led to rapid urbanization. According to the 1938 census, 30.9 percent of the population lived in urban municipal towns. By 1951 this had increased to 38.7 percent and continued to increase sharply so that by 1985 it had reached 67.2 percent. By the mid-1980s urban growth had consolidated the change from a predominantly rural to an urban economy. According to the 1993 census, Bogotá, the capital city, had a population of 5,399,000. Other major cities are Medellín (2,556,000 people) in the western province of Antioquia; Cali (2,064,000), southwest of Bogotá; and Barranquilla (1,329,000), on the Caribbean.

Colombia is one of the most Spanish of all South American nations, although persons of pure Spanish descent constitute only 20 percent of the population. The mestizos (people who are a mixture of white and indigenous Amerindians) comprise 58 percent. The mulattos (a mixture of African and white ethnicities) make up 14 percent, and those of African descent are only 4 percent of the population. The zambos (those of mixed African and Amerindian origins) comprise 3 percent of Colombia's people.

Colombia is a country composed primarily of young people, with 63 percent aged between 15 and 64 years, 32 percent below the age of 14, and 5 percent of the population older than 65.

An important feature of the latter half of the twentieth century has been a strong tendency for Colombians to emigrate . The 2 main destinations of emigrants are the United States and Venezuela. Up until the end of the 1980s, most of the emigrants to the United States were professionals, which represented a considerable brain drain (when talented professionals leave their home country due to better pay and living conditions abroad). However, in the 1990s the composition of emigrants also included less qualified professionals. Emigration to Venezuela has also been a major demographic phenomenon. The number of Colombians living illegally in Venezuela has been variously estimated at between half and three-quarters of a million. If legal migrants are considered, there may be as many as a million Colombian migrants in that neighboring country. The illegal migration is virtually impossible to control because the border is long and open, and Colombians are indistinguishable from Venezuelans. During the 1990s the trend has diminished due to Venezuela's economic problems. Overall, Colombia's emigration problem has been the result of not only better economic opportunities elsewhere, but rampant insecurity in the country.

One significant part of the transformation of the Colombian economy from the 1970s has been the expansion of the mining sector, mostly comprised of oil production and coal, though it also includes gold and valuable gems such as emeralds. Oil production in Colombia has been declining as of late, with 700,600 barrels a day (bbl/d) in 2000, down 125,000 bbl/d from the previous year. The country's reserves are estimated at about 2.6 billion barrels, but the potential reserves are much higher. Colombia's main oil export market is the United States, with 332,000 bbl/d in 2000. Production is located mainly in the Cusiana and Cupiagua fields in the Andes foothills and in the Cano Limón field near the Venezuelan border. British Petroleum has major operations at Cusiana and Cupiagua, while the Cano Limón field is operated by U.S.-based Occidental.

All foreign investment in petroleum exploration and development in Colombia must be carried out under a profit-sharing association contract between the investor and the state petroleum company, Ecopetrol. In the face of U.S. oil companies' interest in increasing exploration and production if contract and tax requirements are smoothed, the Pastrana administration has responded by liberalizing contracting terms.

Colombia produces more than 90 percent of the world's emeralds; it is the second-largest South American producer of gold and the most important coal producer in Latin America. Coal reserves have been estimated between 12 billion and 60 billion tons, approximately 40 percent of all Latin American reserves. Important levels of production began in 1984, attaining 4,000 metric tons, which jumped to close to 13,000 metric tons by 1993 and 28,500 metric tons in 1997. Excluding oil production, there was a relative decline in mining from 1992 to 1996, accompanied by a decline in the number of persons employed to almost 20,000.

The economic landscape of Colombia has changed dramatically in the last 40 years, and one clear example is the changes in the manufacturing industry by the late twentieth century. Industrial manufacturing is quite varied. According to DANE, by the year 2000 the most important products included basic chemicals (5.3 billion pesos), beverages (3.5 billion pesos), milling and cereal processing (3 billion pesos), oil refining (2.9 billion pesos), and pulp, paper and derived products (2.1 billion pesos). Though an important proportion of production is for the domestic market, the relative level of sophistication in some of these products can be measured by the extent to which they are exported. In 2000 manufactured products accounted for nearly 40 percent of all exports, with chemicals and textiles ranking near the top.

Manufacturing is located mostly in the provinces of Antioquia, Cauca, in the capital district, and to a lesser extent in Barranquilla, on the Atlantic coast. The number of people employed by this sector is 588,681—ap-proximately 20 percent of the economically active population.

The lowering of many trade barriers in the 1990s served to streamline Colombian industry, and most sectors have managed to remain competitive with other Latin American competitors, leading to an increase in exports to those countries.

The construction industry, one of the largest employment sectors in Colombia, has been very dynamic over the last 2 decades, totaling close to 7,000 companies. In the years from 1998 to 2001, however, it was hit hard by the recession and tight credit conditions.

Colombia has an extensive banking sector. According to DANE, it accounted in 1995 for close to 16 percent of GDP, clearly the most important service activity. It is headed by the Bank of the Republic, which functions as the central bank. There are approximately 1,700 companies devoted to financial services, of which 37 are established banks, 30 are investment companies, nearly 70 stock and bond brokers, and a small number of leasing and real estate leasing. There are 17 long-term and development financial institutions, including the government-owned Industrial Development Institute. The government has played an important role in the financial sector since the 1970s because of the unwillingness of banks to make long-term loan commitments to riskier projects such as coal development, and because of the necessity for periodic public intervention to stabilize financial markets.

The 6 largest of these corporations hold 86 percent of all assets in this sector. In the mid-1980s there was a crunch in the banking system that forced the government to nationalize a number of troubled domestic banks. It also created the Financial Institutions Guarantee Fund (Fondo de Garantias de Instituciones Financieras) as the authority to intervene or recapitalize those financial institutions in great need of support. By the end of the 1980s the government set out plans for privatization, the second phase of which took place by the end of the 1990s.

Tourism is a relatively minor activity in the country. In 1997 inbound tourists to Colombia numbered 1,193,000 people, contributing US$955 million in foreign exchange, representing 6 percent of exports. In 1980 the corresponding figures were US$357 million and 6.7 percent of exports, so in twenty years there was a slight decline in tourism's contribution to the economy. If hotels and travel agencies are included, the number of people involved in tourism by 1997 was only 23,700. Most tourist activities are concentrated in the Atlantic coast, in the cities of Cartagena, Santa Marta, and Barranquilla. Tourists are mainly attracted to a mixture of beaches and historic sites. As part of the viceroyalty of Nueva Granada during colonial times, the coastal cities retain a good part of this heritage. With Colombia suffering from violence for 2 decades and targeted as a high-risk country, it is quite understandable that there are not more tourists.

The commercial sector is very important in most urban areas, and it has modernized substantially over the years, though suffering from the recession from 1998 to 2000. According to the most recent DANE survey, by 1997 personnel employed in supermarkets, "hypermarkets," and malls was nearly 84,000, with sales of 2.87 billion pesos. These figures declined to 74,000 persons employed and 2.02 billion pesos worth of sales in 2000. Main lines of sales are food, clothing, and pharmaceuticals, though automobiles have increased their share over the last 5 years. Although most retail is regionally based, there are 3 main chain stores—Almacenes Exito, Vivero, and Carulla—which have remained strong despite the downturn of the economy by the end of the 1990s. Also important national and regional companies—including the 3 just mentioned—have forged alliances or have opened participation to foreign owners, mostly in the coastal area, while new foreign firms have established retail operations of their own.

Colombia's domestic air-transport market was deregulated in 1990, a move that led to domestic passenger traffic doubling to just over 6 million people by 1996. International traffic more than doubled to 1.7 million passengers by the same year. Colombia also concluded an agreement with Venezuela, which led to flights between Venezuela and Bogotá increasing dramatically.

Colombia has no territories or colonies.

This sight helped me because I had to do a report!
3
mark

this was good i guess.. didnt find everything that i needed for my report on this country. could have been better.
5
Emily

how many people work for the Republic of Columbia? I am doing a spanish project and would like to know.
8
angel

This website is amazing i just started a project and finished it IN THE SAME HOUR!
9
O

I think this site is AMAZING! For my social studies project, this was the key to success! I would like to thank the National Encyclopedia for all of their great information. KEEP UP THE GREAT WORK!
10
LA

cool site had a project and all my information is here