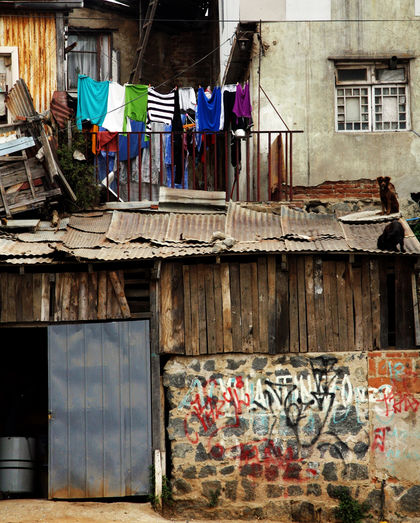 Currently more than 40 percent of the country's wealth is concentrated in the hands of just 10 percent of the population. In Latin America, only Brazil and Guatemala have less equitable income distribution. This huge disparity has created a large social divide in which a relatively small middle class is caught between a huge

mass of urban and rural poor and a small and extremely powerful elite. Fundamental to the shifts in economic policy over the years is the importance attached to income distribution by the changing administrations.

Wages have risen faster than inflation each year since 1990, a reflection of greater productivity in the country. Increased wages have produced public benefits of increased living standards and an expansion in the labor force. The number of Chileans with incomes below the poverty line (roughly US$4,000 per year for a family of 4) fell from 46 percent of the population in 1987 to 23 percent in 1997. Unemployment has varied with the business cycle in recent years, with annual rates between 4.5 to 6 percent.

The administration led by President Lagos has emphasized a commitment to better social conditions. They have addressed 4 priority areas: health, public safety, unemployment, and labor reforms. Finance Minister Nicolas Eyzaguirre has committed himself to fiscal discipline so that additional government resources can be used for social development. The secretary general to the presidency, Alvaro Garcia, has declared labor reforms and the creation of an unemployment benefit mechanism a priority. Analysts believe that even if unemployment rates are brought down through an expanding economy, Chile will still need to tackle fundamental problems of poverty and social disaffection if it is to avoid civil and labor unrest.

The Chilean constitution states that the government has an obligation to "promote, protect, restore health and rehabilitate the health status of individuals." Government administrations have made an effort to meet this goal. Chile currently spends about 7 percent of its GDP on health care. As of 1997 the public health system covered 67 percent of the Chilean population while private health insurance covered 27 percent. Public health care is somewhat inefficient, and the government is moving toward privatization of this sector.

I love this website it is the best website ever. Best source. Just wish there was more information about poverty. I am doing a powerpoint on these categories.
2
William S. Foy, Ph.D.

This website is very interesting and i really love this site.
3
Patrick Ring, Student

While this article in particular is rather short, I found it quite useful.