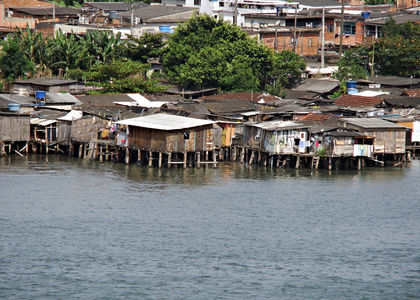 Brazil has a few wealthy people and a large number of very poor people. The gap between the highest and the lowest social levels is high, even if it decreased during the late 1990s. Stabilization of the economy, through lower inflation levels, has given more purchasing power to the poor. Social indicators show that since 1994, when Fernando Henrique Cardoso became president, the percentage of people living below the poverty line decreased from 19 percent of the total population in 1993 to 14.51 percent in 1999, the lowest level in decades.

Despite a government program against illiteracy, developed in 1971, 15 percent of the population aged 15 and higher were still illiterate in 1999. This number is higher than the percentage in Latin America and the Caribbean Islands as a whole. The percentage of illiteracy among the upper-middle class is 10 percent. Education is free at the school and university levels. Secondary school is the responsibility of the municipalities, and universities are the responsibility of the federal and state governments.

The biggest social challenge facing the Brazilian government and society is the lack of education, housing, health care, and nutrition for the homeless children of Brazil. Thousands of children live in the streets, abandoned by their parents who cannot afford to raise them. Confronting starvation and living in deplorable conditions, these children abuse drugs, commit crimes, and resort to prostitution in order to survive. The government has developed programs through the Ministry of Social Assistance to combat the poverty and starvation of homeless children.

Sociology 300 asked for the most updated information regarding this topic.
2
Malachi friesen

I really like this article 'cause it helped me a lot for my project at school!
3
amy guilding

thanks for info thanks alot you help me do my school work ;)
6
james

Very interesting
it helped alot and now i have a A+