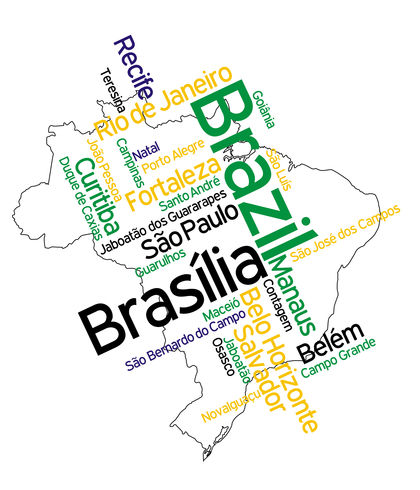 The Brazilian Constitution, created in 1988, supports a democratic government with universal suffrage by direct and secret ballot. Voting is compulsory for literate persons between 18 and 69 years of age and is optional for persons who are illiterate, over 70 years of age, or 16 and 17 years of age. There are 3 branches of government: the executive, legislative, and judicial. The president exercises executive power, and is elected by direct ballot to a 4-year term. Legislative power is exercised by the bicameral (2-chambered) National Congress comprised of: the Federal Senate, or upper house, whose 81 members are elected by a system of proportional representation for 4 years; and the Chamber of Deputies, or lower house, whose 513 members are elected for 8 years by direct ballot, and whose districts are proportional to the size of the population. Each state has a directly elected governor and an elected legislature. The municipalities are governed by directly elected mayors and an elected legislature.

Judicial power is exercised by the Supreme Federal Tribunal, whose judges are appointed for life and who are elected by their own tribunal members. Brazil's judicial system plays an important role in the Brazilian economy. It is responsible for compliance to laws regarding the economy, which are determined by the constitution. Any government decision affecting the rights of the individual is contested and supported by an independent judicial system. Therefore, radical changes in legislature regarding the economy are almost impossible if the judicial system disapproves.

Brazil went through decades of military dictatorship. The military overthrew the left-wing regime of President João Goulart in 1964 and ruled Brazil until 1985. The Brazilian military exerted complete control over the economy, politics, and popular media. All mass communication, art, and popular opinion were censored by military intelligence. Many leftist politicians were arrested and exiled to other countries during these dark years. However, in 1985, popular pressures and a recession led to peaceful democratic elections and indirect elections for the presidency. The legislative election of 1985 resulted in the formation of the democratic regimes of the 1980s and 1990s, and the military lost its power and influence in the economy. Since then there have been military, navy, and aviation ministries in the Brazilian government, but their influence has not been felt in the most important economic and political decisions.

A coalition of the Party of Brazilian Social Democracy (PSDB), the Liberal Front Party (PFL), and the Party of the Brazilian Democratic Movement (PMDB) has held power since Brazil became a democracy. This coalition is opposed by the coalition of the Worker's Party (PT) and other smaller parties. The PSDB and the PT were the strongest political forces during the 1990s, directly opposing each other in the national congress and throughout the states.

The Democratic Workers' Party (PDT), led by Leonel Brizola, criticized the military dictatorship of the 1970s. The Brazilian Democratic Movement (MDB), which later turned into the PMDB, also opposed the military regime. The PFL represents the conservative front of Brazil with alliances to the winner of the 1989 presidential elections. The Communist Party of Brazil (PC) represents extreme opposition to the government and has alliances with the organizers of the Landless Movement.

Brazil had its first democratic presidential elections in 1989 after decades of military dictatorship. Luís Inácio da Silva, also known as Lula, represented a coalition of worker union parties (including the PT), but lost to Fernando Collor de Mello who represented a liberal, pro-business party. In the democratic elections of 1994 (the second since 1960), Lula fell again to Fernando Henrique Cardoso. Cardoso developed a strong economic policy, cutting inflation, and decreasing government spending in order to meet IMF targets and receive loans. The Brazilian real was then tied to the U.S. dollar and forced to maintain a constant exchange rate . Inflation stabilized, but the cuts in government expenditure generated a recession in the country. In 1997 Brazil's congress approved a constitutional amendment enabling Fernando Henrique Cardoso to run for reelection in 1998. He was reelected for a second term, beating Lula again and continuing his economic policies.

Brazil's government plays a large role in the economy, controlling many sectors of the economy that are considered strategic, including power generation, oil extraction, mining of natural resources, water supply, and telecommunications. Fernando Henrique Cardoso began to adopt policies to end these monopolies . The policies include privatization of state-run companies, and deregulation of the energy and mining sectors.

Nearly 61 percent of government revenue comes from tax payments. Personal income tax rates are progressive, with a maximum rate of 25 percent. The income tax rate on corporations and other legal entities are also progressive, with a maximum of 30 percent. Profits are taxed at up to 50.5 percent and capital gains at 25 percent. A value-added tax that ranges from 10 percent to 15 percent is payable on sales and transfers of goods in accordance with the nature of the production. Apart from personal income taxes, government taxes are applied on corporation income, turnover , sales, financial operations, minerals, fuels, electric power, real estate, municipal service, and urban real estate. Tax evasion is rampant in Brazil, but this crime came under attack during 2000. The Central Bank of Brazil and the Ministério da Receita (Ministry of Income) compared their records in order to determine which Brazilians had not filed income taxes.

I am working on a project for my culinary class and needed a lot of this information! it helped me out a lot! :)
2
maya

thanks this really helps it gave me alot of information. thank you again you rock
3
Fionna

Good infomation.It tell you everything you need to know about Brazil.
4
Sophia

This information saved me from getting troubled by my teacher. Thank you!
7
Hannah

Thanks! Super helpful :) There was a lot of really good and helpful information.