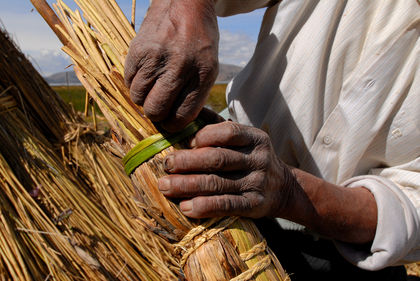 Bolivia is considered a poor country with the lowest GDP per capita among the Latin countries of South America (Guyana, Suriname, and French Guiana are lower). At the same time, Bolivia's exact ranking depends on the varied use and interpretations of the statistical information by different organizations and media. While the excellent Financial Times survey of Bolivia of 1994 places it as the second poorest country in the hemisphere (after Haiti), the U.S. Agency for International Development (USAID) ranks Bolivia in 2000 as the fifth poorest. Yet there has been improvement. In 1993, the per capita income was given as US$856 and is currently cited as just over US$1,000. Bolivia is one of the 22 countries that have qualified for debt relief by the World Bank in its HIPC (highly indebted poor countries) program. At the same time, the Human Development Report 2000 has Bolivia in the category of Medium Human Development (as are Ecuador, Peru, and Paraguay—the last 2 share a border with Bolivia) and not in the Low category such as Haiti and many African nations. Bolivia's neighbors, Brazil, Chile, and Argentina, are in the High rank.

the World Bank criteria and those of PRGF, which made it eligible for "enhanced" HIPC aid. The Bolivian media reported in February 2001 that Bolivia and 8 other countries of the 41 countries classified as poor with a high indebtedness reached all the required steps for the enhanced program. Bolivia's debt will be reduced by 45 percent.

Bolivia's Ministry of Finance shows evidence of improvement with a decrease in the poverty rate from 85.5 percent in 1976 to 70.2 percent in 1992. The World Bank reported for 1999 that Bolivia had a 67 percent overall rate of poverty, which was 81 percent in the rural areas. In 2000, USAID reported that 94 percent of Bolivians who live in rural areas live below the poverty level, and of these 88 percent are considered indigenous people. Poverty remains a leading cause for the high infant (67 per 1,000) and maternal (3.9 per 1,000) mortality rates. Poverty in the rural areas, with 65 percent involuntary underemployment, is the single main cause for migration to the urban areas.

Bolivia can appear to the visitor as a rather prosperous country compared to many other poor countries, mostly because it has enjoyed a stable economy and political system since the mid-1980s, a tolerable crime rate, and an expanding middle class. In 1991, 20 percent of the workforce received 54 percent of all income, and 50 percent received only 17 percent. To this must be added that Bolivia still has low population density of 7.9 persons per square kilometer (20 per square mile) of land suited for agriculture.

Bolivia is favored with much foreign aid because of its qualification for enhanced HIPC, its coca plant eradication and crop substitution policies, and its economic and political stability. In 1997, U.S. aid funding came to US$163 million, Japan US$65 million, Netherlands US$60 million, Germany US$47.5 million, and Sweden US$20 million. Multilateral donations came to US$264.2 million. The IMF reported that in 1998 total foreign aid was Bs598 billion. The Paris Consultative Group of 26 donor countries pledged a 44 percent increase in 1998 to support Bolivia's socio-economic reforms and investment programs. Therefore, Bolivia has, and will in the future, depend heavily on foreign aid if it continues a policy that encompasses globalization (identified by those opposed as neo-liberalism).

Poverty affects human population groups in varying ways, according to gender and ethnic origin. Indigenous and rural inhabitants and, amongst these, children, adolescents and women, are the groups most affected by poverty and exclusion. They are the most vulnerable.
A projection made taking data from the last National Population Census (2001) into account could infer that at present there are 2,500,000 children aged under 18 and 2,600,000 women, of which girls and adolescents are the most vulnerable group living in conditions of poverty.