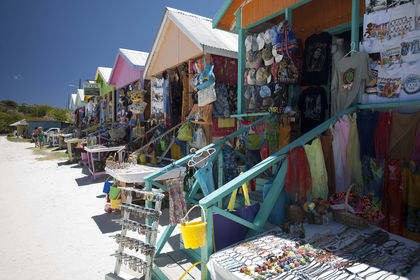 Close to 67 percent of the country's population are in the age group 15-64. The population is young, with 28 percent of the population aged 0-14 years and only 5 percent aged 65 years and over. In the late 1980s, about one-fifth of all births were to mothers aged under 19 years. Hence, the government, with the aid of the UNFPA Peer Counselling and Youth Health Services Project, has been teaching teens the use of contraceptives, among other birth control techniques, in an effort to reduce teenage pregnancies.

There are about 3,000 residents of Montserrat living in Antigua and Barbuda. These persons are evacuees who fled the island because of the volcanic eruption in 1997.

An industrial park located at Coolidge near the V. C. Bird International airport produces exports such as paints, galvanized sheets, furniture, paper products, and the assembly of household appliances, vehicles, and garments. Local manufacturers are provided with incentives such as tax and duty-free concessions.

Manufacturers can export to the United States, European, Canadian, and Caribbean markets as a result of trade agreements such as the Lomé Convention, the Caribbean Basin Initiative (CBI) and Caribbean Common Market (CARICOM).

In 1999 the government signed an agreement with the People's Republic of China to use local cotton in the manufacture of textiles for the export market. A factory is to be constructed to facilitate this project.

Much of the buoyancy in the economy over the last few years has been due to the steady growth in the construction sector. Private and government investments have facilitated this growth. Construction contributed on average 11 percent of GDP between 1996 and 1998.

Tourism is the mainstay of the economy of Antigua and Barbuda and is the leading sector in terms of providing employment and creating foreign exchange. In 1999 it contributed 60 percent of GDP and more than half of all jobs. According to the Americas Review 1998 , tourism contributed 15 percent directly and around 40 percent indirectly to the GDP in 1998. Real growth in this sector has moved from an average of 7 percent for the period 1985-89 to 8.24 percent for the period 1990-95. There was slow growth between 1995 and 1998.

To combat increasing competition from other Caribbean destinations, the government and the Antigua Hotel and Tourist Association have established a joint fund to market the country's appeal as a tourist destination. The Association has agreed to match the proceeds from a 2 percent hotel guest levy introduced by the government.

At the start of March 2001, the Antigua Workers Union (AWU), the trade union which represents close to 7,000 workers in the tourism industry, described tourism as an industry in crisis. The AWU claimed the industry is on the decline because some airlines are pulling out of the country, and government was not spending enough money to promote tourism. While the government has conceded that it was not spending enough on marketing because of cash flow problems, it has rejected the AWU's contention that the industry is in crisis.

RETAIL. The retail sector is dominated by the sale of food and beverages, clothing and textiles, and vegetables. The main markets are located in the capital, St. John's. There are many street vendors and duty-free shops. The government has been taking steps to improve this sector. A US$43.5 million vendors' mall and market has been built to provide better facilities for retailers in the capital. In addition, a US$27 million fisheries complex now provides improved facilities for fish processing and retailing. A growing area of computer business on Antigua is Internet casinos.

Antigua and Barbuda has no territories or colonies.