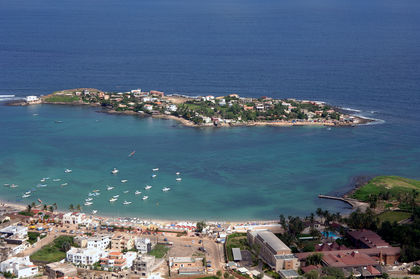 A relatively small country located in West Africa, Senegal has a total area of 196,190 square kilometers (75,748 square miles), making it slightly smaller than the state of South Dakota. Water composes 4,190 square kilometers (1,618 square miles) of this area, while the coastline, which borders the North Atlantic Ocean, stretches for 531 kilometers (330 miles). Senegal is bordered to the north by Mauritania, to the east by the Republic of Mali, to the south by Guinea and Guinea-Bissau, and to the west by the Atlantic Ocean. The country of Gambia juts out below the central part of the Senegalese coast, creating a finger-like enclave that penetrates deep into Senegal. Dakar, the capital of Senegal, is located on the northern coast.

In July 2000 the population of Senegal was estimated at 9,987,494. The growth rate was estimated at 2.94 percent per year, with a birth rate of 37.94 births per 1,000 people, and a death rate of 8.57 deaths per 1,000 people. The population of Senegal is young, with 45 percent under 14 years of age, 52 percent between the ages of 15 and 64, and only 3 percent above 65. A young population can benefit the economy because there are fewer elderly people to care for. Yet it creates pressure on the economy to continually expand to create new employment opportunities for new entrants to the labor force . In 2000, the World Bank stated that 125,000 people were expected to join the Senegalese labor force every year, creating a major impediment to the country's developmental efforts. Therefore, the Senegalese government has adopted a population control policy designed to limit the birthrate of Senegalese women. The importance of reducing Senegal's high fertility (5.21 children born per woman) will be a difficult challenge for a country that is socially conservative and resistant to using birth control.

Like many African countries, the people of Senegal are ethnically diverse. Of the many ethnic groups that make up the Senegalese population, 43.3 percent are Wolof, 23.8 percent Pular, 14.7 percent Jola, 3 percent Mandinka, 1.1 percent Soninke, and 1 percent European and Lebanese. Several smaller ethnic groups compose the remaining 9.4 percent of the population. The country is mostly Muslim, with 92 percent of the population followers of Islam. Followers of several indigenous religions constitute about 6 percent of the population, while the remaining 2 percent are Christian, mostly Roman Catholic. French is the official language of the country, though many people speak indigenous languages such as Wolof, Pulaar, Jola, or Mandinka.

The fishing industry is one of the most important areas of primary sector activity in Senegal. In 1994 the industry accounted for 8.5 percent of the GDP, employed 200,000 persons, provided 27.3 percent of total exports, and earned US$240 million. Favorable world prices and competitive pricing because of the 1994 currency devaluation boosted fishing exports. The output of fishing, or "fish-catch," reached 486,800 metric tons in 1997. This figure demonstrates the exceptional growth of the fishing industry in recent years, considering that total output for 1991 was only 387,800 metric tons. According to the U.S. State Department Country Commercial Guide , the development of the fishing sector is hampered by an aging and outmoded fleet, the threat of over-fishing (thereby depleting supply), and stiff competition from South Asia in international fish markets.

The secondary economic sector, that is, the sector that converts primary goods into finished products and is more commonly referred to as industry, accounted for 20 percent of Senegal's GDP in 1997. The 2 major industrial activities are mining and manufacturing.

Mining output in Senegal is primarily calcium phosphates. In 1994 phosphate and phosphate products accounted for 19 percent of total merchandise export earnings, producing US$162 million in export revenue. While Europe has traditionally been the major importer of Senegalese phosphates, the U.S. State Department Country Commercial Guide notes that new markets in Asia and Africa have recently developed. Despite its importance as an exporting industry, however, phosphates have not played a large role domestically. Phosphate mining accounts for less than 2 percent of Senegal's GDP. The industry provides important jobs, but only about 2,000 are available. Production of phosphates has also decreased over the past several years. In 1991 phosphate production reached 1,546 metric tons, whereas figures for 1998 were much less at 1,087 metric tons. This reflects diminishing reserves of phosphates and illustrates how environmental or geographical factors can influence a country's economy.

. Known for its mild climate, multiple beaches, and great sport fishing, Senegal has long been a tourist destination for European travelers, particularly the French. The high season runs from December to February, when Senegalese weather is most inviting. In recent years, the tourist industry has skyrocketed. In 1991 about 269,300 tourists visited Senegal, contributing 37.9 billion CFA francs to the economy. By 1997 the number of visitors reached 341,500 and contributed 80 billion CFA francs to the economy. Tourism is now one of Senegal's major sources of foreign currency earnings, which are vital for meeting the country's import bills. Although most tourists are French, there has been a rise in vacationers from other European countries and from North America. Most of the impetus towards growth in the tourism industry has come from the private sector . The government has hardly invested in tourism over the past 10 years and sold off many state-owned hotels to the private sector.

As a member of the West African Economic and Monetary Union (UEMOA), Senegal shares its currency, the CFA franc, with 6 other member countries: Benin, Togo, Mali, Côte d'Ivoire, Burkina Faso, and Niger. The CFA franc is issued by the West African Central Bank. The commercial banking sector has a long history in Senegal, which has 8 banks, all of them established prior to the 1990s. The largest banks are French, reflecting the historical link between the French and Senegalese economies. The Société Generale de Banques du Senegal (SGBS), the largest commercial bank, with total deposits and borrowing equaling 152,099 million CFA francs, is an affiliate of the Société Generale de Banques of France. The Senegalese government does not own any shares in the bank. The other commercial banks are owned by private and foreign (French) shareholders, the major exception being the Caisse Nationale de Crédit Agricole du Senegal.

Besides a few large French-owned import-export firms that are involved in retailing, there are many competitive small-scale traders specializing in the wholesale and retail distribution of fabrics and consumer goods. In the past, Lebanese merchants were the interface between French trading companies and the Senegalese population. They are gradually being replaced by Senegalese merchants selling popular consumer goods, such as textiles and electronics. There are also a limited number of larger retail stores, such as supermarkets, which deal in imported goods. Since the currency devaluation in 1994, however, these stores are threatened by the high costs of imports.

Because of the few employment opportunities offered in the formal economy, many Senegalese have turned to the informal sector to survive. The informal sector remains unregulated and untaxed because it operates outside the administrative framework of the government. The sector's activities are not criminal, but "extra-legal," meaning they are legitimate and not controlled. Informal activities range from selling fruit on street-corners to selling sophisticated high-tech stereo equipment. There are about 30,000 small businesses in the informal sector, employing about 57,000 persons, according to 1995 estimates. Sandaga, a sprawling unregulated market in the heart of Dakar, is the capital's principal distribution center for manufactured goods such as textiles, footwear, cosmetics, food, and electronic equipment.

Senegal has no territories or colonies.

Which cold war occurred here, when and why? How did it came to an end ? What were its consiquences?
2
krishna

Which is the nearest sea port of Senegal? And how many kilometer way from capital city?