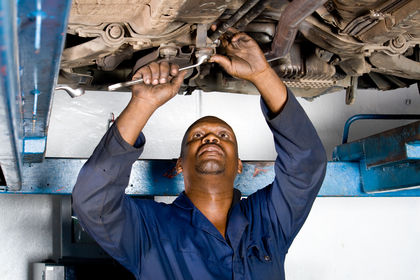 Nigeria had an estimated labor force of 42.844 million in 1999. Women comprised 36 percent of that force, which included talented and well-educated entrepreneurs. The estimated unemployment rate in 1992 was 28 percent. In 2000 the estimated unemployment rate increased to 32 percent. Secondary school graduates and women make up the largest proportion of the unemployed. The unemployment rate among the urban youth had hovered around 40 percent since the 1990s. Many college graduates have remained without full employment since the late 1980s. The government, including federal, state, and local units, is the largest employer outside the agricultural sector.

With the exception of employees classified as essential—members of the armed services, the police force, firefighters, Central Bank employees, and customs and excise staff—Nigerian workers may form or join trade or labor unions. They may strike to obtain improved working conditions and benefits and bargain collectively for higher wages. In 1999 about 3.5 million non-agricultural workers belonged to 42 recognized trade unions under a single national labor federation.

The first labor union—the civil service union— emerged in 1912. By 1950 the number had grown to 144 with more than 144,000 members, and 300,000 in 1963 affiliated with 5 central labor associations. Because of a series of labor problems and the meddling of politicians between 1963 and 1975, the military government dissolved the central unions and decreed only 1 central unit, the Nigerian Labor Congress, in 1976. In 1977 11 labor union leaders were banned from further union activity. A 1978 labor decree amendment reorganized more than 1,000 previously existing unions into 70 registered industrial unions under the Nigerian Labor Congress. In addition to the recognized trade unions, women's organizations, mostly professional and social clubs, collectively seek to improve women's conditions and participation in the economic and political life of the nation. Journalists, university professors, and students have their own organizations also as interest groups.

Nigerian labor laws prohibit forced or compulsory labor. They also prohibit the employment of children under 15 years of age in commerce and industry and restrict other child labor to domestic or agricultural work. Many children, however, hawk goods in markets and junctions of major roads and streets in the cities and assist their parents in trade and commerce. In 1974 the military government changed the work week from 35 to 40 hours by decree and stipulated payment for extra work done over the legal limit. Employers are required by law to compensate employees injured at work and dependent survivors of those who died in industrial accidents.

Strikes or industrial actions by workers tend to be frequent in Nigeria. Although plagued by leadership struggles, ideological differences, and regional ethnic conflicts, the Nigerian Labor Congress has been able to organize or threaten nationwide workers' strikes, demanding the retention of government subsidies on petroleum products, minimum wages, and improved working conditions. Public health doctors organized in 1985; several labor unions in 1998 protested the austerity measures of the Structural Adjustment Program. Similar actions were taken by the Academic Staff Union of Nigerian Universities (1986, 1988), the National Union of Nigerian Students (1986, 1989, 1990s), and the National Union of Petroleum and Natural Gas Workers (1997).

Conditions for workers in Nigeria are far from ideal. Civil servants and employees of private companies (foreign) have relatively good offices and facilities, health care, and wages, but that is not the case for most of the others. Conditions in the pre-collegiate schools and the universities have deteriorated markedly because of repression, underfunding, and irregular payment of salaries. Protests or industrial actions by trade union leaders often resulted in detention. A number of university students were killed by the police, and the universities shut down following students' protests and riots. Some doctors and professors lost their jobs because of industrial action. In addition, income inequalities between the rulers and bureaucrats on the one hand and masses of workers on the other, poor wages, and late payment of salaries demoralize workers. Furthermore, they adversely affect their standard of living, health, and work productivity. The poor conditions contribute to the pervasive corruption in Nigeria and the use of the country as a conduit for drug trafficking.

what does the nigerian labour law states on a staff that works for 6 days 24hrs a day,how many days of rest is that staff entitled to?
2
peter

i would have a better understanding about the stipulated working 40hrs, and its relation to shift works.
3
Nasiru Bello Gombe

My serious concern is not only about working condition,what about condition after working,the labour organisations are only concerned about working condition. see many retirees who lost contact with a penny from federal government for the passed four years what is labour doing about this problem. one day every worker will join them.
4
nene

My question is if a private company hired a group of daily paid labourers, is the company suppose to charge tax on thier daily rate, at what percentage
5
uche chioma

Pls i want to know if NLC goes from one company to the other to check the working conditions of average nigerians especially in these Lebannese, Indian and Chinesse companies. Because i know that they are into modern Slavery.
8
rosemary

Pls advise me on what to do, I have work with a private company for the past 17 years now. and the way the staff are been treated when leaving d organization is unfair- either they put the person on indefinite suspension till further note and never to return without benefit. I don,t want to fall victim.
what do I do please reply.
9
abel anthony

I would like to use this apportunity, partly, to show my appreciation on your effort on awareness on this matters you are giving to the society. In the other way round, is a question: the question is that, what are the actual working hours for the federal government Muslim workers on Fridays?

what is my right as a worker haven worked for four years and dually resigned?
14
opeyemi

I will like to know what the law says about an employee's employment being terminated without notice,because have just been dismissed with any package ie salary in lieu of notice.
15
collins onyema

does the law have any provision for the protection of employees working in trade union organisation?
16
Varun Kalra

Pls i want to know, how many percent of a company profit goes to worker welfare inline with both international n Nigeria labour law n condition of service. Thks pls reply back to my inbox
18
peter

i want to know the period of time that is lawful to give to a private firm/organisation for resignation.. is urgent

Is it right for employer to take half day pay if a worker report to work fifteen minutes late?
20
Enigma

Please I'd like to know if female civil servant and political office holders pay tax and if they do, is it same as their male counterparts?
21
Mariah

i would like to have a better understanding about the stipulated working 40hrs, and its relation to shift works in a call centre.
22
Blessing

Please i will like to know what the Labour law states about work hours.\I hear it is 9hours/day, does this apply to does who work shift?
Thanks as i await your response.
23
Oladeji azeez

Hi,
What is the stipulated amount according to the Nigerian Labour Law for any private company to pay a graduate in Nigeria? Please Reply.
25
don

Is Saturday and Sunday inclusive in the annual leave days of a Nigerian worker. Or only working days are counted? Please I need to be refereed to a government gazette on this.
27
Isimijola

The fact remains that provision should be made for the occurence of industrial accidents in the working environment.
28
abdullah

To what extent is the Nigerian workers employees protected against unfair dismissal? Pls send the answer to my email
29
rofiat

Pls what is the normal working hour in nigeria nd what does the labour law said about over time issue mostly for private sector. Thank u
30
jonathan

helo, i would want to know the benefit that shall be accorded to a worker, whats i mean is , workers writes in an organization.
31
Kelly Nomiye

Pls is it proper for a company to disengage is workers without pay and medical care a day after a major incident that took two life's I.e a blow out on a drilling rig which was not the fault of the workers? I need to know the position of NLC on such issue thanks
32
biola

please what does labor law state about a contract staff if is entitle to leave or not.
33
Hannah

My questions are: What is workers right in an organization? Secondly, What is the normal working hour in Nigeria and what does the labour law said ab out over time issue mostly for private sectors. Thirdly, is it right for an employer using offensive language on his employee?
34
Hannah

My questions are: What is workers right in an organization? Secondly, What is the normal working hour in Nigeria and what does the labour law said ab out over time issue mostly for private sectors. Thirdly, is it right for an employer using offensive language on his employee?
35
sogunro olubunmi

how is the working hours of a shift staff calculated under the labour law.
38
slash

jst wondering, wer re the answers 2 these question?
39
Dee

What did Labour law's view on succession planing in an organisation in Nigeria?
40
Oluwaseun

Thank you for taking out time to make clarifications on employment regulations and issues.
Please what are the statutory limits for working hours in Nigeria? Also are there minimum leave entitlements and what sources or regulations back this up?? Thank you
41
owolabi

please enlighten me on this, is it the right of the employers to enforce Saturday and Sunday work on their employees? reply in anticipation.
42
Nma

Please, I would like to know about the LABOUR ACT B as it pertains to recruitment, apprentices, women and young persons, underground work,night work, young persons and shippping, domestic servants,forced labour, settlement of disputes and court procedure.
43
onyinye

can a private company terminate a contract employment because the woman is pregnant and sick.
44
ABDULLAHI ATTAHIRU