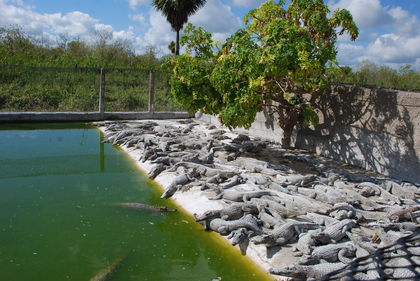 Although it depends heavily on the oil industry for its budgetary revenues, Nigeria is predominantly still an agricultural society. Approximately 70 percent of the population engages in agricultural production at a subsistence level. Agricultural holdings are generally small and scattered. Agriculture provided 41 percent of Nigeria's total gross domestic product (GDP) in 1999. This percentage represented a normal decrease of 24.7 percent from its contribution of 65.7 percent to the GDP in 1957. The decrease will continue because, as economic development occurs, the relative size of the agricultural sector usually decreases.

Nigeria's wide range of climate variations allows it to produce a variety of food and cash crops . The staple food crops include cassava, yams, corn, coco-yams, cow-peas, beans, sweet potatoes, millet, plantains, bananas, rice, sorghum, and a variety of fruits and vegetables. The leading cash crops are cocoa, citrus, cotton, groundnuts (peanuts), palm oil, palm kernel, benniseed, and rubber. They were also Nigeria's major exports in the 1960s and early 1970s until petroleum surpassed them in the 1970s. Chief among the export destinations for Nigerian agricultural exports are Britain, the United States, Canada, France, and Germany.

A significant portion of the agricultural sector in Nigeria involves cattle herding, fishing, poultry, and lumbering, which contributed more than 2 percent to the GDP in the 1980s. According to the UN Food and Agriculture Organization 1987 estimate, there were 12.2 million cattle, 13.2 million sheep, 26.0 million goats, 1.3 million pigs, 700,000 donkeys, 250,000 horses, and 18,000 camels, mostly in northern Nigeria, and owned mostly by rural dwellers rather than by commercial companies. Fisheries output ranged from 600,000 to 700,000 tons annually in the 1970s. Estimates indicate that the output had fallen to 120,000 tons of fish per year by 1990. This was partly due to environmental degradation and water pollution in Ogoniland and the Delta region in general by the oil companies.

Decline in agricultural production in Nigeria began with the advent of the petroleum boom in the early 1970s. The boom in the oil sector brought about a distortion of the labor market. The distortion in turn produced adverse effects on the production levels of both food and cash crops. Governments had paid farmers low prices over the years on food for the domestic market in order to satisfy urban demands for cheap basic food products. This policy, in turn, progressively made agricultural work unattractive and enhanced the lure of the cities for farm workers. Collectively, these developments worsened the low productivity, both per unit of land and per worker, due to several factors: inadequate technology, acts of nature such as drought, poor transportation and infrastructure, and trade restrictions.

As food production could not keep pace with its increasing population, Nigeria began to import food. It also lost its status as a net exporter of such cash crops as cocoa, palm oil, and groundnuts. According to U.S. Department of State FY2001 Country Commercial Guide, Nigeria's total food and agricultural imports are valued at approximately US$1.6 billion per year. Among the major imports from the United States are wheat, sugar, milk powder, and consumer-ready food products.

Efforts since the late 1970s to revitalize agriculture in order to make Nigeria food self-sufficient again and to increase the export of agricultural products have produced only modest results. The Obasanjo administration, however, has made agriculture the highest priority of its economic policy.

I ask about Nigarian Agriculture Engineering TThe information ,I need it as soon as possible
2
oluwatoyin ajala

please, i want to know the influence of agro-chemical in the life of Nigeria farmers. and usefull is it to them?
6
Bankole Tobi

What is the drainege procedure for agricultural drainage project?
7
lateef ganiyat

what is the meaning of farm settlement, and in what way has it contributed to food production in nigeria
8
Damilola hamzat

It is a nice work, I really appreciate the brains behind this!
11
Mehmet

The role of Agricultural engineering in the development of Agriculture in Nigeria.Please i need the information very urgent.
16
Temmy Adebayo Thomas

Governments' policies have a great role in improving the level of agriculture in Nigeria.
We have the resources but not fully utilized and the little that are being utilized are misused.
Our government just needs to be firm in their policies especially in terms of banning or VAT on importation so as to encourage our local farmers to produce more.
We citizens also have our own role by supporting all stakeholders and make sure all hands are on deck...
Good people, Great Nation...
17
Prince vicato

My personal request was agricultural exportation in nigeria. so please if i can get an instant report on my email i would be mostly delighted. thanks a lot for your assistance.
18
JUSTICE JUSTIN

What is the current state of Agriculture in Nigeria? Has the 2011 Nigeria budget allocation to agriculture really been implemented into it or diverted?
19
Prince Boyi

Now, its time for Nigeria to weak up to assists their farmers by given them farm input such as fertilizer, inproved seed, chemicals,for better production
21
ibrahim audu

what is d way out of this dulldrum?.with d changes in climate condition ,what is the agric scientist doing in that regard?
22
Amaka.

Please i want to get answers on the factors militating against Nigerian agriculture.
I will be most grateful if my request is given urgent and immediate consideration.
23
Chidi Ihemeje

I have the biase to invest in Agriculture.I have a firm conviction that there are opportunities in the Nigeria Agricultural sector.Would you please give me the necessary information that help me in my judgement as to how to go about my choice of investment.
24
zainab

I like to know the present situation of agricultural practice in Nigeria.
28
naroka jonathan

what is the current situation concerning allocation of loans to Nigeria agriculture/farmers.
29
Tesleem

Pls I need information on the impact of agricultural product on nigeria economic development,thanks
31
Edozie

What is state and agriculture in nigeria? To what extend does agriculture plays a significant role in nigera's economy?
33
Adeoye akorede o

what is the aspect of technology in agricultural development process in Nigeria?
35
Samson joseph musa

What are the importance of crop improvement to nigerian's agriculture?
36
precious

what are the current trends inn rural agriculture in nigeria
38
Bashir A.S

The decline in agricultural productivity in Nigeria should also be looked at in the angle of migration, most especially the rural- urban migration. Large number of rural labour force have moved to the urban centers for paid jobs in the industries.
39
James Ahar

To revitalized agriculture in Nigeria, extension
work most be given full attention to educate the farmers on things like what, how, when and where to plant. serious soil fertility survey most be carried out and appropriate fertilizer recommendation most be made
40
Tony

Please I will like to know where Jovanafarms Seminar takes place in Ado-Ekiti, Ekiti-State. Nigeria
41
dasolly

What are the gender and resource use efficiency of cassava
42
Adedayo R.Ladelokun

Efficient and effective management of agricultural resources are crucial in advancing agricultural productivity.Government efforts to finance agriculture or give agricultural loans to the farmers will require a great deal of close monitoring of funds so that such funds get to the actual farmers who will use the funds for their agricultural production.Culprits of corrupt practices must be severely punished.Nigeria is highly blessed,our land is fertile.Apart from guaranting food security at home, we should be exporting food to other countries !
43
OLUBISI ADIO

It really saddens me whenever I read about the amount that goes into the importation of food. We have the land, we have got all it takes to be self-sufficient and it is high time the government shifted focus to the rural areas. Not just providing some seeds, tractors or whatever, these people needs enlightenment. They need to be educated, agriculture in Nigeria shouldn't be all about production, we could do more by adding value.
44
Chioma