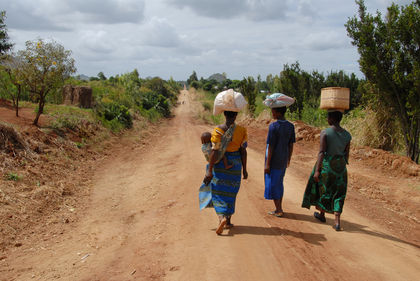 Malawi is located in southeast Africa, landlocked between Mozambique to the east and south, Zambia to the west, and Tanzania to the north. Malawi is separated from Mozambique and Tanzania to a large extent by Lake Malawi, which lies on the country's eastern edge. The immense extent of this lake (the third largest in Africa), which accounts for 20 percent of Malawi's 118,480 square kilometers (45,745 square miles) of total area, means that despite Malawi's inland location, the country has a sizeable coastal area.

A mid-2000 estimate of Malawi's population placed it at 10,385,849. Malawi's demographics, however, are complicated by the AIDS pandemic, which tends radically to skew its statistics. Hence the life expectancy at birth of the average Malawian is a very low 37.58 years. The proportion of the population under age 20 is 57 percent, and infant mortality runs to 122.28 deaths per 1,000, one of the worst in the world (the birth rate is 38.49 per 1,000). Despite a fertility rate of 5.33 children born per Malawian woman, population growth is only 1.61 percent per annum. Not all of this is attributable solely to AIDS, as disease and chronic malnutrition are also major causes of mortality. The scale of AIDS' impact can be understood, however, if Malawi's population figures are set against those, for example, of Madagascar, where the average lifespan is nearly 50 percent longer, the death rate is a mere third as high, and overall population growth is doubled. The United Nations estimated in 1999 that around 16 percent of all Malawians between the ages of 15 and 49 were HIV/AIDS infected. In the same year, the disease claimed 70,000 lives, with urban areas worst affected. The economic fall-out has been disastrous.

With 90 percent of Malawi's population living in rural areas, cities and towns have traditionally played a small part in the nation's life. This, however, is showing signs of changing, and between 1987 and 1998 the urban population grew by 4.7 percent.

Ethnically, Malawi is a tribal federation principally of Chewa, Tumbuka, Yao, and Ngoni peoples, and to a lesser extent Nyanja, Lomwe, Sena, Tonga, and Ngonde tribes, as well as various Asian and European groups. The national language (besides English) is Chichewa, with Chitumbuka predominating in the north. Religiously, 55 percent are Protestant, 20 percent Roman Catholic, 20 percent Muslim, with the remainder holding various indigenous beliefs.

Malawi's ongoing battles against disease, poor sanitation, and infrastructure deficiency make it an unlikely tourist destination. And yet its tropical climate and scenic landscape have seen rapid gains in the industry, with visitor numbers climbing to 215,000 in 1999, a 20 percent increase from 1995. Although visitors do come from Europe and North America, most are South African and Zimbabwean, and most come for Lake Malawi. Efforts are being made to expand facilities and boost numbers, but without the injection of significant investment, there will be little impact. Negative publicity over the presence of the potentially fatal bilharzias bacteria in Lake Malawi and fears that the region may not be safe for travellers have also proved handicaps.

In addition to its central bank, the Reserve Bank of Malawi, Malawi has 5 commercial banks. Although newer operators have begun to extend services, the sector remains basic and highly limited, with the 2 largest banks having no foreign shareholders or strategic foreign links. Lack of competition has kept charges high and most lending tends to be to government agencies, to the exclusion of private borrowers. A stock exchange was founded in 1994, and by 2000, there were 8 companies listed on it. But its small size and the absence of a speculative trading culture have kept activity to a minimum, and the exchange has not proved a source of business financing.

Because of Malawi's rural and subsistence-dominated economy, the purchasing power of most Malawians is minimal, hence retailing is sparse. Urban areas are better served, with a variety of small traders selling fabrics, shoes, paper and pens, and imported electrical equipment, and with a large contingent of informal street vendors. Most of the stores are operated by Malawi's minority Asian population, estimated to control of 30 percent of commercial activity.

Malawi has no territories or colonies.

Good enough and it contains vital information concerning our beloved country Malawi and am very happy to know this it helps me to be more familiar with my beloved country and the people of Malawi themselves. continue doing this it puts our beloved country on the world map and other people can also appreciate the beauty we have back in malawi. tanks very much I greatly appreciate.