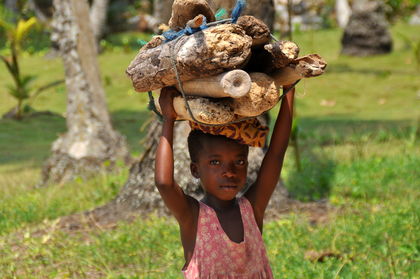 Ghana has a tropical climate, warm and comparatively dry along the southeast coast, hot and humid in the southwest, and hot and dry in the north. Its terrain is mostly low plains with a plateau in the south-central area. Its highest point is Mount Afadjato, which rises to 880 meters (2,887 feet). Lake Volta, its largest lake, is the world's largest artificial lake. Ghana has 10 regions: the Northern, Upper West, Upper East, Volta, Ashanti, Western, Eastern, Central, Brong-Ahafo, and Greater Accra.

Ghana has a young population, with more than 42 percent of the people below 15 years of age in 2000 and 55 percent in the 15-65 year bracket. Those over 65 constitute only 3 percent of the population. Life expectancy was estimated at 57 years overall, with 56 and 58 years for men and women, respectively.

The population is predominantly of African origin, with the Akan tribe comprising 44 percent of the population, the Moshi-Dagomba 16 percent, the Ewe 13 percent, the Ga-Adangbe 8 percent, the Yoruba 1.3 percent, and European and other nationalities less than 1 percent. Most people (38 percent) hold traditional beliefs, while 30 percent follow the Islamic faith, 24 percent are Christians, and 8 percent have other beliefs. English is the official language, with the other main languages being Akan, Moshi-Dagomba, Ewe, and Ga.

Ghana has no territories or colonies.

OMG!! wow i am shocked by your accuracy!!! this site is so helpful :)
3
Braima Francis Xavier