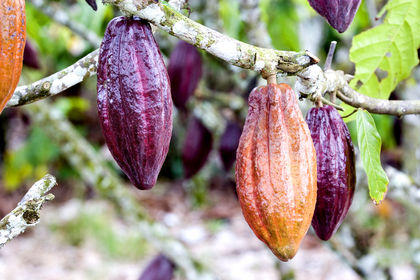 Agriculture accounted for more than 40 percent of GDP in 1999 and employed three-fifths of the workforce. However, despite its importance, sectoral growth has lagged behind other sectors of the economy and has been unpredictable, as most farming is reliant upon rainwater. Agricultural output (including forestry and fishing) grew at just 1.0 percent per year between 1980 and 1990, and 2.7 percent between 1990 and 1997. Agricultural growth increased to 5.3 percent in 1998. Ghana is one of the world's leading producers of cocoa, mostly grown on small farms. In 1998-99 cocoa production reached 400,000 metric tons.

Although most of the year-to-year trends are attributable to weather patterns, the longer term improvement in performance can be attributed to public policy changes. As part of the broader macroeconomic reforms (reforms which affect the whole economy, such as changing the exchange rate , altering controls on interest rates, and adjusting the money supply) the government has removed food price controls , raised cocoa prices paid to producers, and boosted extension services, which help increase farmer productivity.

Other cash crops are coffee, bananas, palm oil, coconuts, and kola nuts. The chief food crops are cassava, maize, yams, coco yams, plantain, millet, corn, fruit, rice, and vegetables. Cattle are raised in the north. Yields of food crops, however, have shown disappointing growth with only cassava and millet yields improving in the past decade. This seems to be a result of low investment and poor technology. The removal of subsidies on fertilizers and other agricultural inputs has also had an effect on several crops.

Cocoa is Ghana's most important agricultural export crop, normally accounting for 30-40 percent of total exports. Most cocoa is produced by around 1.6 million small farmers on plots of less than 3 hectares in the forest areas of the Ashanti, Brong-Ahafo, Central, Eastern, Western, and Volta regions. In the 1960s Ghana was the world's largest producer of cocoa but it has since been overtaken by neighboring Côte d'Ivoire.

Livestock farming is restricted to the Northern region and the Accra plains. Production of meat is, however, insufficient to meet local annual demand of about 200,000 tons. The shortfall has been met by imports of livestock from neighboring countries, although imports have been constrained by dwindling foreign exchange reserves . As part of the revitalization effort, the government undertook to rehabilitate and restock the 6 cattle stations at Pong-Tamale, Ejura, Babile, Kintampo, Amrahia, and Nungua, but these efforts have yet to bear fruit.

More than one-third of Ghana's total land area is covered by forest, although not all of it is suitable for commercial exploitation. Commercial forestry is concentrated in the Western region in Southern Ghana, and has been the third largest foreign exchange earner in recent years (accounting for about 10 percent of exports).

Since 1983, the forestry industry has undergone substantial changes, attracting aid and commercial credits which have focused on forestry management, research and equipment for logging, saw-milling, and manufacture. Since 1989 the government has banned the export of certain timbers to avoid deforestation. River and sea fishing are important, although domestic fisheries (in the ocean and Lake Volta) supply only about one-half of the country's total annual demand of 600,000 tons.

Quite impressive.but what if we would like to know about the systems of agriculture?