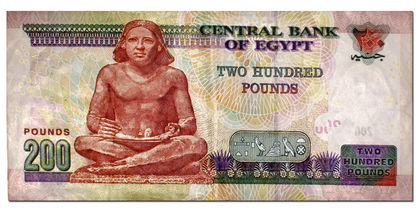 Egypt has had 3 presidents since the 1954 revolution that brought popular president Gamal Abdel Nasser to power. Between 1954 and 1970, Nasser attempted to institute socialist economic principles on the Soviet model, and actively sought to industrialize an agriculture-based economy. Internally, Nasser dismantled the political and economic power of the landed class by nationalizing land previously owned by rich feudal landlords and distributing it to the poor. During those years, the government spearheaded a campaign to improve the lot of the working class and the peasants, who were offered free education and employment opportunities. Although the economy grew at an acceptable rate in the initial years, the failure of Nasser's socialist policies became evident toward the end of his rule, especially after the 1967 war in which Egypt lost parts of the Sinai desert to Israel. Military expenditure consumed about 25 percent of gross national product (GNP) under Nasser, while a rapidly growing population began to place additional pressures on the state.

Under President Anwar Sadat (1970-81), Egypt began its move toward a market-based economy. In April 1974, Sadat announced a new economic policy that came to be known as "infitah," or open-door policy. This policy brought the relaxation of currency regulations and led to a remarkable increase in foreign investment and a larger economic role for the private sector. In 1977, acting on the advice of the World Bank, Sadat lifted subsidies on flour, rice, and cooking oil and canceled bonuses and pay increases. These actions, in the face of growing disillusionment at the infitah policy, which allowed only a handful of people to accumulate wealth, led to a wave of popular protest across the country on 17 January 1977. As a result of the 2-day clashes in which 800 people were killed and several thousands more wounded, the government was forced to back down on the price increases while retaining 10 percent wage increases and other benefits for public sector employees.

In 1981, President Sadat was assassinated by fundamentalists of the Islamic Jihad group, who disagreed violently with his policies. He was succeeded by his vice-president, Hosni Mubarak, who was still holding office in 2001. The threat of growing popular dissatisfaction explains the economic reforms chosen by the Egyptian government since 1990. In 1991, Islamic groups began pressing for a strict Islamic state that would shun Western values and lifestyles. Their quest to overthrow the government includes demands for restrictions on freedom of expression, liberal education, and secular laws. These groups have resorted to violent means to overthrow the government, and have mostly targeted government installations and the tourism sector. The government has cracked down hard on the Islamists since 1994 but, although the threat from many of these groups has abated since 1998, they nevertheless have continued to be a source of much concern to the government and a serious impediment to foreign investment.

Since taking office in 1981, President Mubarak has demonstrated commitment to the program of economic reform that President Sadat charted for the country in the mid-1970s. At the time Mubarak came to power, the economy was faltering under the weight of massive foreign debt . Unable to meet its payments, the Mubarak government was forced to reschedule US$6.5 billion in debts to the IMF and the Paris Club (an informal group of official creditors comprising the world's largest countries) in 1987. It was not, however, until 1991 that the government, faced with a growing Islamic threat, began concentrating all its efforts on economic reform. The results of the reform program have been promising. According to the U.S. State Department Country Commercial Guide for 2000, the public debt has fallen from $40 billion to $30 billion, the Egyptian pound is stable, and inflation is under control. Further, foreign reserves reached an all-time high in 1997 and the budget deficit was slashed. Egypt's heavy debt burden accumulated during the 1980s had been reduced from $31 billion to $19 billion by 1998.

Politically, Mubarak allowed parliamentary elections in 1984. However, for most of the last 25 years, Egypt has been governed by a single party, the National Democratic Party. Although the national constitution describes Egypt as a "democratic, socialist state," in reality it is not much of either. While it is not a dictatorship, the government is an authoritarian one, given legitimacy by being elected. Egyptian voters elect a 448-member Majlis al-Sha'ab (People's Assembly), which, in turn, elects a president who wields wide powers during a 6-year term. The president appoints the vice-president and all ministers, and can be re-elected for additional terms. However, given that emergency powers—first put into effect shortly after the assassination of President Anwar Sadat—were extended for a further 3 years in February 2000, the current regime and the security forces behind it have far more power than the constitution allows.

There are a total of 13 legal political parties, the most important of which include the New Wafd (Delegation) Party, the Socialist Labor Party, the Umma Party, and the Socialist Liberal Party. However, since its creation by Sadat in 1978, the New Democratic Party (NDP) has maintained an unequaled nationwide party machine and an iron grip on the Assembly, and thus on the presidency. The ruling NDP won an overwhelming majority in the 1996 and 2000 parliamentary elections, as well as in the April 1997 local and municipal elections, although opposition candidates and many foreign observers alleged vote rigging and intimidation at the ballot boxes.

Since the late 1990s, the Islamic movement known as the Ikhwan al-Muslimin (The Muslim Brotherhood) has made substantial inroads into the political establishment, but is largely held at bay by the NDP. The Brotherhood is officially banned by Egyptian law, which prohibits political parties founded on a religious basis. However, Islamist candidates do campaign under the auspices of legal opposition parties, such as the Socialist Labor Party, a practice quietly sanctioned by the government. Although the official presence of the Brotherhood is still minor, it maintains a powerful grassroots movement and has captured control of nearly every professional organization in the country, including the influential Lawyers' Association.

The judicial system in Egypt has been fairly independent from the executive branch of government. Although freedom of expression is to some extent tolerated, the media—including newspapers, magazines, and periodicals—are subject to censorship. The government owns all domestic television and radio stations.

Between 1952 and the mid-1970s, the military emerged as the strongest institution in Egypt and, as a result, played a major role in its politics and economy. Egypt's large professional army, which numbers 450,000 personnel, was created in the 1950s as a deterrent force against Israel and today represents 1 percent of the population. However, unlike other developing countries, the military's role in Egypt has not been politically disruptive. Its political role, in fact, greatly diminished over the last 2 decades of the twentieth century, particularly as the country moved toward political liberalization in the mid-1980s. Although the military has opted to stay out of the government's confrontation with Islamic militants opposing the state, it continues to form the backbone of the regime and enjoys great privileges. Since the early 1990s, however, the military's economic involvement has expanded into 4 major areas: military industries and arms production, civilian industries, agriculture, and national infrastructure.

Taxes are a major source of state revenue, contributing approximately one-third of the government budget, and 16.6 percent of GDP. Taxes come in a variety of forms, including income tax , which accounts for 22 percent of the total tax revenue, and taxes on goods and services, which account for another 17 percent. Tax increases are expected in the coming years, but, aware of the potentially disruptive political implications of such a course, the government has been reluctant to burden the Egyptian populace with further taxes.

Thanks for what you have shown the evidence, but can be done for a change in the presidency and be so much better than it is now
2
Osama,Asyut, Egypt

thank you for your interesting report,but more information can be added due to the current egyptian status after 25 Jan revolution.