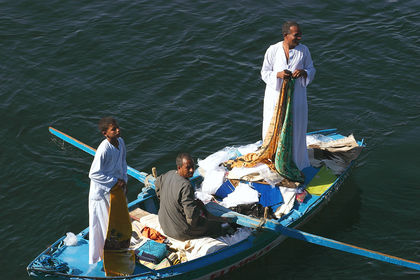 Egypt has grown increasingly reliant on imports over a very long period of time, and has, as a result, maintained an external trade deficit for most of the past 6 decades. The deficit, however, grew considerably between 1974 and 1984 as a result of President Sadat's open-door policy that encouraged imports, and reached US$4.86 billion in 1980. This sharp rise was fueled by the infusion of large amounts of foreign aid following the signing of the Camp David peace accords with Israel in 1978 and the rise in oil revenue. Imports dropped for a brief period between 1984 and 1986, due to the shortage of foreign exchange coupled with debt repayments. Since 1986, imports have been on the rise, increasing from US$11.74 billion in 1995 to US$15.8 billion in 1999,

when exports totaled US$4.6 billion. Thus, with exports remaining steady at around US$4.5 billion, Egypt has continued to maintain its trade deficit. Since 1998, the government has attempted to discourage imports by tightening trade financing and controlling the amounts of foreign currency in the country. Coupled with higher oil prices, the policy of lowering imports succeeded in reducing the deficit in 2000. However, imports are likely to continue outpacing exports due to the widespread lack of most raw materials, especially those needed by the construction and industrial sectors.

Egypt imports a wide variety of goods, especially capital goods such as machinery and equipment, necessary for its economic and infrastructure development. Food has traditionally accounted for 20 percent of Egypt's imports, but chemicals, wood products, and fuels are also imported. Before 1973, one-third of Egypt's imports came from the former Eastern European bloc, or Comecon countries, as part of Egypt's alliance with the Soviet Union. After the signing of the Camp David accords, Egypt's new pro-Western orientation was coupled with a shift in trading partners. Today, the European Union, especially Germany, Italy, and France, supplies more than 40 percent of Egypt's imports, while the United States accounts for 15-20 percent of total imports.

Between 1960 and 1980, agricultural products made up the bulk of exports, accounting for 71 percent of the total. That percentage dropped significantly in the 1990s, reaching 20 percent of total exports in 1995, according to the EIU. On the other hand, the export of fuel, minerals, and metal rose sharply over that same period, from 8 percent in 1960 to 41 percent in 1995. The export of manufactured goods has also risen since the 1990s, from US$2.9 million in 1993 to US$3.4 million in 1998. This increase has been mainly the result of the growth in clothing and textile production, which accounted for 14 percent of total exports in 1998. The value of exports has been steady since 1997, reaching US$4.6 billion in 1999. The failure to expand exports has been blamed on a number of factors: state bureaucracy and red tape, lack of competitiveness in the exchange rate market, the shortage of modern technology, and low industrial capacity. Additionally, the inadequate marketing experience of Egyptian exporters has left them ill-equipped to compete successfully in the export business.

Egypt's main export partners are the European Union—chiefly Italy, the United Kingdom, and Germany—and the United States. Before 1973, Egypt exported some 55 percent of its goods to communist countries then in the sphere of influence of the Soviet Union. Since the early 1990s, Egypt has gradually regained its influential role in the region, which it had lost after the signing of the 1978 Camp David Accords, and its exports to neighboring Arab countries have increased.

Egypt has been a member of the World Trade Organization (WTO) since 1995. The effects of the implementation of membership requirements remain unclear. While the agreement secures better access to developing markets, there is rising concern about its impact on the protected sectors of the economy, namely the industrial and agricultural sectors. The lifting of state protection might make these sectors more competitive, but could also lead to a huge increase in the country's import bill.

What are Egypts main exports? Who do they export to? What is Egypt's economic status?