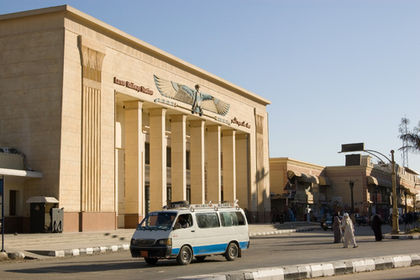 Egypt's infrastructure is relatively underdeveloped. The country is serviced by a network of over 64,000 kilometers (39,769 miles) of primary and secondary roads, 49,984 kilometers (31,060 miles) of which are paved. Despite the modernization of the road system in the 1980s, most roads remain in poor condition or under construction. With growing numbers of licensed automobiles in the 1990s, the road system, especially in urban areas, has become highly congested, and is a major safety concern. According to the EIU Country Profile, "Egypt reports the highest incidence of traffic fatalities in the world: 44.1 deaths per 100,000 kilometers driven in 1994." Egypt's aging state-owned railway system, which has 9,400 kilometers of tracks (5,841 miles) is old by regional standards and in need of upgrade. The sector is slated for privatization. Cairo's new metro system, opened in 1987, is one of the most heavily used systems in the world, carrying some 1.4 million passengers a day.

Egypt has a total of 90 airports. Egypt Air, the country's official airline, carries some 4.6 million passengers, roughly 25 percent of international air traffic, and an estimated total of 87,240 metric tons of freight annually, but has a poor service record and is generally unreliable. Egypt has 3 major ports, at Alexandria, Port Said, and Suez, and 3,500 kilometers (2,175 miles) of waterways, divided between the Nile and the canals.

Electrical power is supplied to Egyptians by the state-owned Egyptian Electricity Authority (EEA), which

has the capacity to produce 15,000 megawatts of power, 80 percent of which are from natural gas. Plans are underway to expand power production by an additional 1,950 megawatts by 2002. Power consumption has been growing at the rate of 5.6 percent year, and EEA plans to invest some US$4.5 billion in the coming years to boost the country's power generation capacity.

Telecommunication services in Egypt are thoroughly modern. Telephone service is provided by the state-owned Telecom Egypt. According to the EIU Country Profile for 2000/2001, the country has some 6.5 million lines, and has been adding new ones at the rate of 1 million per year. In 2000, Egypt had over 60 local Internet service providers.