CONGO, DEMOCRATIC REPUBLIC OF THE 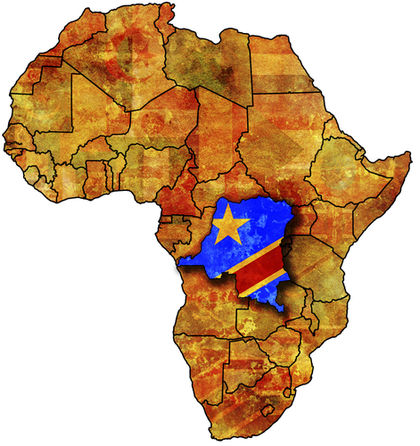 Kinshasa is the capital of the Congo. The Congo's other major cities are Lubumbashi, Mbuji-Mayi, Kolwezi, Kisangani, and Matadi.

The Congo is made up of more than 200 tribes. The 4 largest tribes in the Congo are the Mongo, Luba, Kongo, and Mangbetu-Azonde. Approximately 700 local languages and dialects are spoken in the Congo. The majority of Congolese speak one of the following languages: Kikongo, Lingala, Tshiluba, Swahili, and French. Most of the Congolese population lives in rural areas, while one-third of the population is urban.

About 80 percent of the Congolese population is Christian. Most non-Christians have traditional African religious beliefs.

Since the colonial era, mining has been and continues to be the Congo's main source of exports and foreign exchange. The Katanga region of the Congo contains some of the world's richest deposits of copper and cobalt. The national copper mining company, GECAMINES, which had been struggling in the 1980s, collapsed in 1991 and has had little success in expanding production since then, thanks again to the wars of the late 1990s. Recovery in this sector will occur only if the Congo enjoys sustained political stability and the mines receive massive technological improvements.

As recently as the 1980s, the DRC was the world's fourth leading producer of industrial diamonds. It also has an abundant reserve of gem-quality diamonds. The Congo exports its diamonds mainly to Belgium, Israel, and India. Two-thirds of the Congo's industrial diamond production is realized through artisanal (skilled worker) diamond diggers. In the 1990s the state granted to one company, IDI Diamonds, a monopoly on the sales and export of diamonds. This move—meant to bring order to the diamond industry—in fact forced most diamond sales into the black market as artisanal diamond diggers sought the highest prices for their diamonds.

The Congo also produces gold. However, production has suffered as a result of both the current and previous wars. Currently, the Congo's main gold mines are in regions governed by rebel forces. Like industrial diamonds, gold production takes place mostly through artisanal panning and is not significant.

Compared to other sub-Saharan African oil producers, the Congo produces very little crude oil. However, offshore oil fields remained one of the government's few stable sources of revenue in the 1990s. The country produces about 22,000 barrels per day of oil. U.S.-owned Chevron and Mobil dominate the Congo's crude oil sector. SOCIR, the national refinery, is unable to process the country's crude oil so it must be processed externally, limiting the economic benefits of this natural resource.

The Congo's primary manufacturing regions are Kinshasa and Lubumbashi, and they produce batteries, tires, shoes, food products, plastics, beverages, autos, textiles, and other consumer goods . Agricultural processing is one of the few relatively healthy industries, thanks to its ability to benefit from the mass of Congolese who are involved with agriculture. Although the Congo's locally-produced goods are far more expensive than imports, local manufacturers have been able to withstand import competition ironically because of the Congo's poor transportation system.

The Congo has no territories or colonies.

Congolese franc (FC). One Congolese franc equals 100 makuta. Due to the unstable nature of the currency it is impossible to predict which notes and coins are available in the country.

US$35.7 billion (purchasing power parity, 1999 est.). [Because most economic activity in the Democratic Republic of Congo is in the informal sector and difficult to track, different world agencies provide very different estimates of GDP. For example, the World Bank listed GDP in 1998 as US$7.0 billion, while the International Monetary Fund listed GDP as US$34.9 billion in the same year.]

It is disappionting to see the word,Tribe, still being used to describe ethnolinguistic identity, in the 21st century. Why use tribe for Africans and ethnic for Europe?