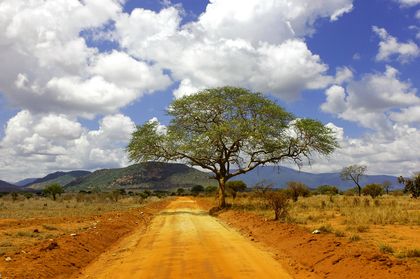 The former French colony of Chad, a landlocked country located in northern Central Africa, is more than 3 times the size of California. The country has an area of 1,284,000 square kilometers (495,755 square miles), with a land boundary length of 5,968 kilometers (3,708 miles). Neighboring countries are Niger, Nigeria, and Cameroon to the west; Libya to the north; Sudan to the east; and the Central African Republic (C.A.R.) to the south. Lake Chad in the southwestern part of the country is the largest body of water in the Sahel region. Chad also has the Tibesti mountain range in the far north, some smaller mountains in central Chad, and a few hills near the southern and western borders. Most of the country is desert or savanna with limited rainfall, although there are moderately temperate areas in the south. Chad's capital, N'Djamena, is in the southwestern part of the country.

Chad's petroleum industry will be extremely important in the short-term future. There are plans to exploit 2 known petroleum deposits: a small reserve of high-grade oil north of Lake Chad and a much larger deposit of heavy crude oil in the Doba Basin of southern Chad. A consortium led by Exxon will employ up to 4000 workers and invest US$3.7 billion to exploit over 1 billion barrels in the Doba basin. Further exploration is planned to determine whether more reserves can be exploited.

A South Korean company, AFKO, recently began building a factory to extract gold reserves near the southern town of Pala. Chad is known to hold deposits of bauxite, iron ore, uranium, tin, and tungsten, but further research is necessary to determine whether these resources can be extracted.

Chad's banking sector is small by international standards. With US$100 million in deposits and limited capital investment, Chadian banks have little money to lend. Much of their capital finances the cotton-buying season for Cotontchad. For other businesses, credit is expensive and difficult to obtain. Short-term credit can cost 18 to 26 percent and long-term credit is rarely available.

The retail business is conducted primarily in the informal sector. Thousands of vendors wander in Chad's urban streets searching for buyers for their wares. In addition, thousands of small stores and roadside stands sell limited varieties of household goods. In rural and urban areas, many vendors gather in a network of small markets where perishable goods are sold.

Transport of goods is managed by many informal sector operators. Small vehicles and large semis carry passengers and merchandise between N'Djamena and different regional centers. Most vehicles are old and break down often.

Chad has no territories or colonies.

Embassy of Chad in the United States. <http://www.chadembassy.org> . Accessed October 2001.

- you guys need to add health but otherwise its great ;]
2
Albra

Albra please look at this article regarding Chad, Africa.