Robert Gabriel Mugabe was born on 21 February 1924 in Kutama, Zimbabwe (then Southern Rhodesia) to Gabriel, a mission carpenter, and Bona Mugabe. Initially educated at missionary schools, Robert completed his secondary and early college studies through correspondence, qualifying as a secondary school teacher in 1941. He taught at a variety of mission schools before going to South Africa, graduating with a Bachelor of Arts in english and history from Fort Hare University in 1951. Upon returning home in 1952, Mugabe taught at Highfield (Harare) and Mambo (Gwelo) government schools. In 1955, Mugabe moved to Northern Rhodesia to teach at Chalimbana Teacher Training College after obtaining a bachelor's degree in education by correspondence.

In 1957, Robert Mugabe went to Ghana to teach at St. Mary's College. It was there that he developed an interest in politics after being inspired by Ghanaian independence and charismatic leaders including Ghana's Kwame Nkrumah and Malawi's Hastings Kamuzu Banda. It was there that he met his first wife, Sally Hayfron (later deceased).

Upon Mugabe's return from Ghana in 1960, he entered the political arena by becoming the publicity secretary and youth organizer for the National Democratic Party (NDP). The NDP was banned on 9 December 1961, but Mugabe became deputy secretary general for the ZAPU. In 1962, authorities banned ZAPU and arrested Mugabe. He was placed under detention from 1964–74, when international pressures secured his release along with other nationalist leaders. From 1974–79, Mugabe commanded guerilla forces from Mozambique. He was elected ZANU president and the 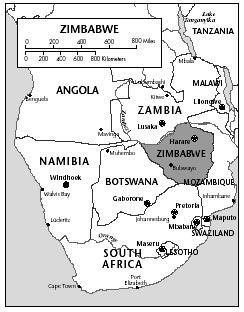 commander in chief of the Zimbabwe National Liberation Army (ZANLA) in 1977 and ultimately led ZANU to the Lancaster House agreements in 1979.

On 16 August 1996, Mugabe married Grace Marufu, his former secretary. The wedding, dubbed "wedding of the century," was attended by 40,000 people. Mugabe's contribution to Zimbabwean and African development are widely recognized; he holds many honorary degrees and two awards for public service: Africa Prize for Leadership for the Sustainable End of Hunger (1988) and the Jawaharlal Nehru Award (1989). He and his wife have a residence at Zvimba, a rural village 50 mi (80 km) west of Harare.