Saleh's military and political career began in 1958 when he joined the irregular tribal forces of Imam Ahmad, the last 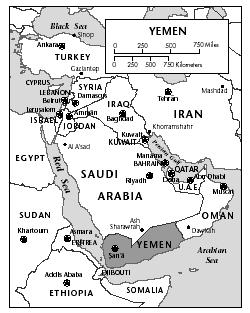 Rassad ruler of Yemen. In 1958, Saleh joined the regular armed forces. By 1970 he was enrolled in a non-commissioned officer's school. At the time of the 1962 revolution, which overthrew the Imam's regime and precipitated the Yemeni civil war, Saleh was an army sergeant who chose to side with the revolutionary republican forces; he was wounded in the line of duty. He was commissioned as a second lieutenant in 1963 and enrolled in the armored school for officers in 1964. In 1974, Saleh was one of the chief participants in the military coup that brought Lt. Colonel al-Hamdi to power. After the coup, he held a number of military commands, including armament chief of armory corps, armor battalion commander, staff officer of the armor division, and the commander of the Taiz Brigade, a position that he held through to the time of his election to the presidency in 1988. In 1982, Ali Abdullah Saleh was promoted to the rank of colonel.

After the assassination of President al-Ghashami on 24 June 1978, Saleh became a member of the temporary council of the presidency and used his position to defeat other contenders for the presidency. On 17 July, the People's Constituent Assembly (the North Yemeni Parliament) elected him president and commander in chief of the armed forces. He was reelected for a third term on 17 July 1988, and became the first president of unified Yemen in May 1990. In September 1999, the Republic of Yemen carried out the first direct presidential elections ever held on the Arabian peninsula and voters returned Saleh to office for another five-year term.