The defining feature of Vietnamese history is nationalism. Throughout its history, Vietnam experienced foreign domination. Despite 1,000 years of Chinese rule (111 BC to AD 939), Vietnam emerged with many of its cultural and historical traditions intact. From 1862 until 1893, the French established control over the entire Indochina region, including Vietnam, Laos, and Cambodia. They administered the area as French Indochina until World War II. Following the Japanese occupation of 1945, the French allowed the formation of the Democratic Republic of Vietnam under Ho Chi Minh's nationalist resistance movement, the Vietminh. Ho's group subscribed to a nationalistic brand of communism while another organization, consisting of royalist and anticommunist groups, supported Emperor Bao Dai.

After World War II, the French attempted to reestablish control over the region. While they provisionally recognized Ho's government in the north, the French sought to negotiate the future of South Vietnam. However, negotiations broke down and the Vietminh attacked French forces. In 1949, the French recognized the authority of the Bao Dai government over southern Vietnam. Fighting between the French and the Vietminh continued until a humiliating French defeat at Dien Bien Phu in May 1954. At the Geneva Conference of July 1954, an armistice ended the fighting and Vietnam was divided at the seventeenth parallel into two nations: the Democratic Republic of Vietnam, headed by the communists and the southern Republic of Vietnam, led by the anticommunist forces, organized around Bao Dai. While this north-south divide was intended to be a temporary measure, Ngo Dinh Diem proclaimed himself the first president of the Republic of Vietnam and repudiated the provisions of the Geneva Accords. Thereafter, Vietnam remained a politically divided and conflict-ridden place until 1975.

The reunification of the country gave birth to the Socialist Republic of Vietnam, with its capital at Hanoi. The North Vietnamese quickly consolidated their control over the south and dominated its politics. The new leaders imposed reeducation camps to instill socialist values and moved to collectivize farms and nationalize business operations. Saigon was renamed Ho Chi Minh City, honoring the founder of the 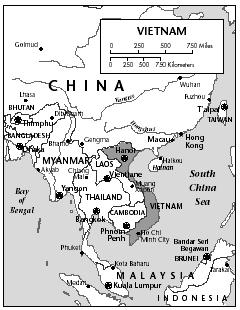 Democratic Republic of Vietnam. The National Assembly approved a new Constitution which declared the state to be a "proletarian dictatorship" and proclaimed the Communist Party as the "only force leading the state and society." Later constitutional revisions introduced major political and economic reforms, including the right to private property. Over the years, many refugees fled Vietnam and settled in the West, fearing political persecution and diminished economic opportunities.

At present, the Constitution designates the 450-member National Assembly as the supreme organ of the state. In practice, however, power is in the hands of party elites who hold important administrative positions in government. The Vietnamese Communist Party (VCP) is the country's only political party. Based on constitutional revisions in 1992, the president is elected by and from the National Assembly. The president in turn, nominates the vice-president, the prime minister, the chief justice of the Supreme Court, and the head of the Supreme People's Inspectorate—all of whom must be approved by the Assembly. The day-to-day affairs of governing are entrusted to the prime minister, the five deputy ministers, and cabinet ministers. The VCP's Central Committee (150 members) and Politburo (15 members) exercise considerable influence.