As Latin America's second-oldest democracy, Venezuela is a federal republic. The 1961 Constitution was replaced by a new charter in 1999. Since 1958, the country has functioned as a democracy and was considered one of the most stable governments in Latin America until conflicts arose after the 1999 Constitution came into effect. As of 2003, Venezuela is widely perceived as one of the most unstable democracies in the region. Suffrage is universal and compulsory for anyone over the age of 18. The 165 members of the unicameral Congress are elected every five years. The judicial system is weak and generally politicized. Supreme Court members are appointed by the legislature. Since 2000, the president is elected for a six-year term with re-election provisions.

The first Europeans to set foot on Venezuelan soil came with Christopher Columbus in 1498. Prior to Columbus, the territory was home to the Carib and Arawak Indians. The Spaniards thought the Indian pile dwellings on Lake Maracaibo resembled buildings in Venice, Italy, and named the area Venezuela or "little Venice." It remained a remote outpost of Spanish administration until the eighteenth century, when cacao, tobacco, and coffee companies were given charters by the Spanish crown. Venezuela gained its independence from Spain in 1821, after a 10-year struggle led by Simón Bolívar, Francisco Miranda, and others. Between 1821 and 1830, it belonged to the Gran Colombia confederation with Ecuador and Colombia.

Venezuela became an independent republic in 1830. The nineteenth century witnessed dictatorships, civil war, and intermittent forays by foreign commercial interests. By 1930, Venezuela had become a major petroleum producer and exporter. Between 1935 and 1958, the country vacillated between dictatorship and democracy.

Until recently, Venezuela had a two-party political system that resulted from the Pact of Punto Fijo, a power-sharing arrangement reached during the transition to democracy in December 1958. Acción Democrática (AD) is a social democratic party founded in 1941 with a strong base of support in organized labor. Comité de Organización Electoral Independiente (COPEI) is a Christian Democratic party slightly right of center. Traditionally, these two parties commanded widespread support from across Venezuelan classes, occupational groups, and regions, effectively marginalizing parties on both the left and right. For 40 years they largely alternated in office. However, since 1988, both parties had been suffering internal leadership rifts. Moreover, the Venezuelan public grew increasingly disaffected with what they frequently referred to as their partidocracia (or "partyarchy"), a government run by the party for the party. By the early 1990s, the perception of widespread corruption among public officials, confirmed by revelations of specific instances, brought public disenchantment to an all-time high.

In 1992, two coup attempts were sparked by junior military officers who were dissatisfied with President Carlos Andres Perez's stringent economic reforms and evidence of political corruption. The leader of the first failed coup was Hugo Chávez, a lieutenant colonel. In May 1993, Perez left office in disgrace after being impeached by the Senate for his participation in a misappropriation and embezzlement scheme. Elections held in December 1993 returned Rafael 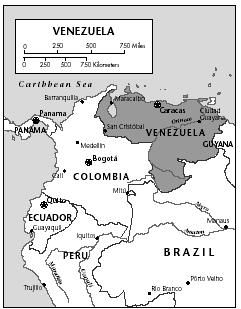 Caldera, a Venezuelan political institution, to the presidency after 20 years. Caldera was the first president since 1958 not elected as the candidate of either AD or COPEI. He won a mere 30% plurality of the vote. Over the next five years the country was plunged into recession three times and the gap between rich and poor grew wider. By the time Caldera left office, Venezuela was in a state of political and economic disarray.