Batlle comes from a distinguished political family. His great-uncle, José Batlle y Ordóñez, remains one of Uruguay's most respected former presidents. During his presidency (1903–07 and 1911–15), Uruguay experienced remarkable social progress. Welfare programs that he initiated remained part of 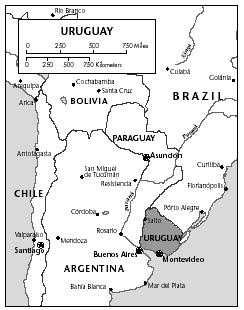 the social structure at the beginning of the twenty-first century. Jorge Batlle came into politics in his teen years, joining the Colorado Party in 1945. Despite his name, Batlle's rise through the party ranks was slow. He was elected to the Chamber of Representatives in 1958, and reelected four years later. In 1966 and 1971, he unsuccessfully ran for the presidency. Outside politics, he spent the bulk of his time working as a journalist or editor of Acción newspaper until it was closed during the dictatorship of 1973–84. During the military regime, Batlle worked in agribusiness but remained politically active. He was arrested several times for his political opinions. At the return of democracy, Batlle, under the auspices of the Colorado Party, was elected senator in November 1984 and again in 1995. In 1989 and 1994, he unsuccessfully sought the presidency.

In 1999, Batlle was a presidential candidate for the Colorados. Traditionally, the Colorados and the National Party (formerly the Blanco Party) had dominated national politics. Yet in the 1990s, the leftists had made major gains at the polls. On 31 October 1999, Tabaré Vázquez, who was backed by a center-left coalition, gained 39% of the vote in the presidential election, not enough to prevent a second election between the top two vote-getters. Batlle finished second with 31.7%. In the November runoff election, Batlle gained 51.59% of the vote to win the presidency. Vázquez had 44.07% of the vote.