Bush is known for his Texan, folksy style of speech, sprinkled by colloquialisms and self-deprecating humor. In his early days in office, he was swift in winning congressional approval of his tax-cut program and he worked to stop or dismantle some of the regulations that the administration of the previous president, Bill Clinton, had proposed in its last weeks. They included legislation to modify bankruptcy laws and proposals to fund church-run social welfare programs. President Bush was also unusually liberal, at least initially, in granting greater policy-making and governing responsibilities to the vice-president and members of the cabinet than earlier administrations had.

Bush won favor from those, including the Christian right, who wanted a return to family values in the White House, particularly after Bill Clinton's relationship with a White House intern, Monica Lewinsky.

Bush also faced criticism early in his term. In May 2001, after accusing the president of moving the Republican Party too far to the right, Vermont Republican Senator Jim Jeffords switched parties, and, by doing so shifted control of the Senate to the Democrats. Other critics charged that Bush was too dependent upon trusted advisors such as Vice-President Dick Cheney and U.S. Secretary of State Colin Powell, and that he tended to be less interested in the details of policy-making, preferring to delegate. Supporters, however, say his strong panel of advisors, quick decision-making, and direct style were aptly suited to a time of war, spurred by the terrorist attacks of 11 September 2001.

In the 2002 mid-term elections, Republicans won back control of the Senate from the Democrats, albeit by a slim 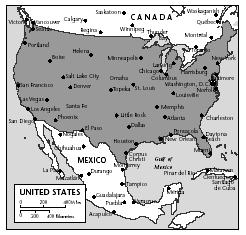 majority (51 to 48), and President Bush had hopes his agenda would see its way through Congress. Bush proposed another large tax cut, added to the one passed in 2001, that was hotly debated in Congress until mid-2003, with Vice-President Cheney casting the tie vote in favor of a Senate compromise plan favorable to Bush's initiative. Bush was anxious to have his judicial nominations confirmed in the Senate, although the confirmations of a few nominees were being held up by Democratic filibusters.

Bush's leadership abilities were affirmed in 2003 with his prosecution of the war in Iraq. Bush stood firm in diplomatic negotiations with other Western nations opposed to war, to the point of ignoring this opposition and uniting with the United Kingdom and a "coalition of the willing" to support the use of force in disarming the Iraqi regime. Saddam Hussein's regime was quickly defeated by U.S. and British military forces, and Bush was faced with the task of guiding the rebuilding of Iraq, which presents a new geopolitical organization of the region.